Demo Against the Grand National and other AR activities

On Saturday 4th April Nottingham Animal Rights had a busy day demonstrating against the grand national (complete with police presence), doing a free vegan food givaway at the sumac centre and hosting people's kitchen - cooking a three course meal for £3 - (also at sumac). 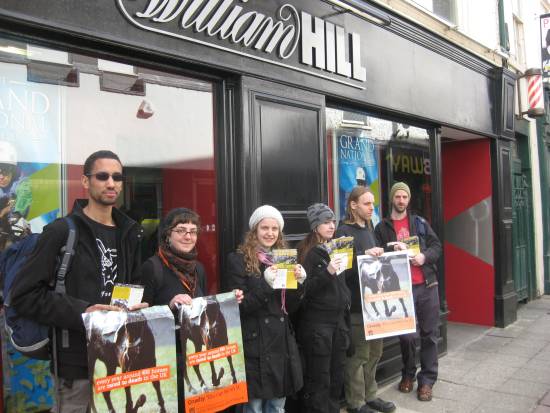 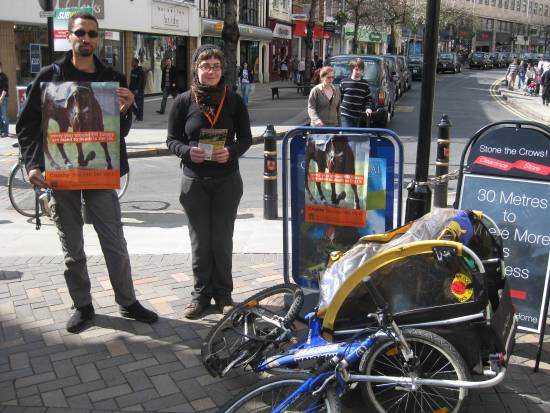 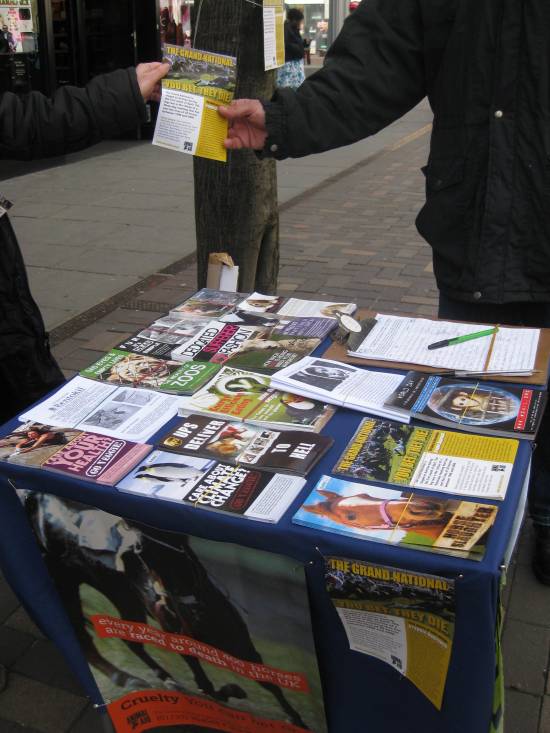 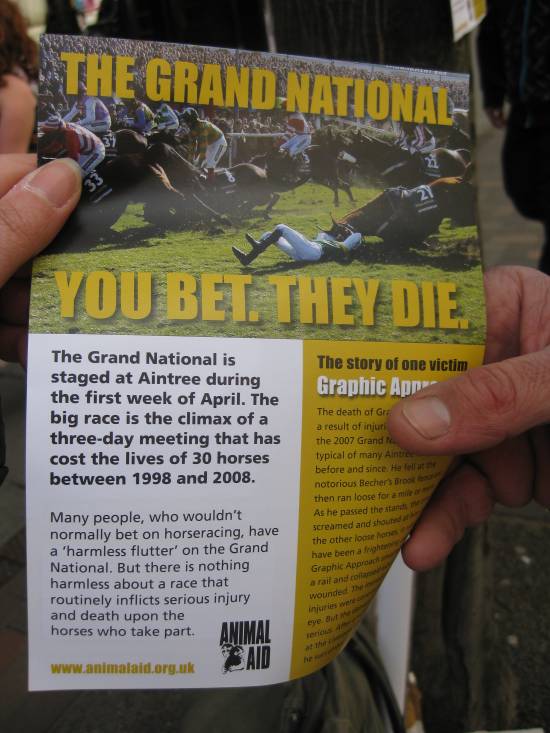 One of the flyers handed out. 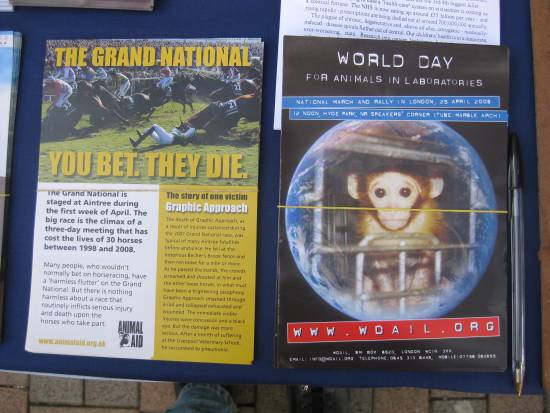 Saturday was a busy day for Nottingham Animal Rights. The Day kicked off with a demonstration against the Grand National, which took place outside William Hill bookmakers in Nottingham City centre. The demonstration was well attended with positive comments from members of the public. However, we did have an amusing encounter with a council police officer (more details below).

The regular animal rights stall was also in the city centre, providing information to the public about local and national causes.

The demo and stall were followed by a free vegan food giveaway at the Sumac Centre, directed at non-vegetarians, with loads of yummy food as well as information about veganism, environmental and animal welfare issues. Food included Veggies burgers, chips, plenty of salad, lemon biscuits and banana cupcakes.

Finally, Notts AR hosted People's Kitchen (also at Sumac): a meal cooked and served by volunteers that provided 3 courses of food for £3. The menu served was: organic melba toast with tapenade and veggie pate; home made Veggies sausages with potato and quinoa hash and a vegetable medley; with a banana-split-choc-cherry cupcake for dessert!

While the demo went well, we still had (minor) difficulties with a uniformed individual (we later discovered he was a council officer) who attempted to assert the law to move us on... but didn't seem to know what the law actually was.

We were instantly led to feel that we were 'in the wrong' and the officer had sided with the manager of the shop - as he simply echoed what she had said when she aggressively told us to move (and informed us that William Hill owned the pavement).

Initially we were told that the demonstration was illegal, we weren't allowed to stand outside the shop, and that it was also illegal if we didn't give our names and addresses. When we pointed out that it was a lawful protest and, as such, we weren't compelled to give our names we were informed that 'our faces were being filmed by CCTV that was going to be burned to DVD so we'd better move further down the road'.

We were then told that 'it would be on our conscience if a pushchair or wheelchair wanted to go down the pavement but couldn't because we were blocking it'. As we were pointing out that we weren't the sort of people who'd force someone in a wheelchair into the road, a man with a pushchair came past. He went past a few of the demonstrators, but because the council officer refused to move off the pavement and let him by - the pushchair had to go onto the road to get around him! (When we were eventually left alone several pushchairs went past without having to go on the road at all, as there was more than enough room on the pavement for people to go past!)

Another policeman came past later on who reiterated that the protest was lawful and told us there were now three tiers of policing: council officers, community support officers and the police.

I suppose it all goes to show that a knowledge of the law is valuable when doing a demo - as you might be told that what you're doing is illegal in order to intimidate you, even if the protest is lawful.