20 years ago I was on the way to a Roy Harper gig in Leeds totally unaware of what was unfolding in Sheffield.
Hillsborough 20 years on and still no justice for the 96 that were killed that day and senior South Yorkshire police officers still got their pensions........disgraceful!

Remember those that fell with a dignified silence at 3:06pm today.

Love and respect to Liverpool a truly great city.

i for one will never, can never, forget.
the folks who died that awful day, and all of those who died in the years since, unable to live with the memories.
the murderous cops and the plain evil journalist scum.
i wasn't there, but my heart was and is and i will never forget. 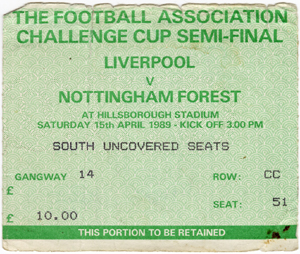 The Hillsborough tragedy passed me by, until I came across a moving article in Left Lion, Nottingham's independent streetwise magazine for culture and comment.

I now know that whilst the venue for the fateful match was in Sheffield, the teams involved were Liverpool and Nottingham Forest.

As it was the Liverpool supporters who were herded into the woefully inadequate smaller Leppings Lane end of the stadium "it wasn’t our [Nottingham's] fathers, siblings and children who died there. Nevertheless, there are thousands of people in Nottingham who had to stand and watch 96 people die".

See 'The Hillsborough disaster: the Nottingham side of the story' at


nb.
Interesting to note that "the Taylor Report deduced that a failure of command amongst senior police officers was the main reason for the disaster..." Sounds familiar. As does the lack of justice 20 years down the line.