Climate Action is Not Stupid

Friday 24th April sees a busy day for anyone concerned about climate change and environmental issues in Nottingham.

The long awaited film, The Age of Stupid, opens at Broadway with the all day 'Nottingham Not Stupid Festival', whilst the Coal Caravan gathers at Sumac, West Bridgford launches their Green Streets Initiative, and all comes together for a Critical Mass Bike Ride. 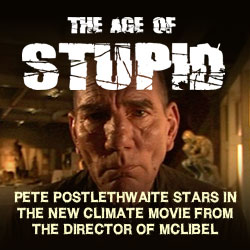 The Age of Stupid finally arrives in Nottingham on 24th April, showing at Broadway Cinema for 7 days.

The Age of Stupid aims to encourage 250 million viewers to become campaigners before COP15, the United Nations Climate Change Conference in Copenhagen in December. In this independently produced and 'crowd funded' film Oscar-nominated Pete Postlethwaite stars as a man living alone in the devastated world of 2055, looking at "old" footage from 2008 and asking: why didn’t we stop climate change when we had the chance?

The film's Producer, Lizzie Gillett will attend a 'Nottingham Not Stupid' Festival at Broadway, with a gathering of 20 climate campaigning groups, media opportunies, film screenings, Q&A's and an open discussion.

6pm and 8.15 screenings of Age of Stupid to be introduced by Lizzie Gillett, the film's producer.

8pm (after 1st screening): Lizzie will lead a discussion on the issues raised by the film, in the Studio adjacent to Screen 3. SPACE IS LIMITED - Screen 3 holds 100, but the discussion space only holds 40.
To reserve a space please email

The fabulous Coal Caravan will be walking and cycling between the sites of proposed open cast mines and new power stations in the Midlands, Yorkshire and North East, talking to local people, organising bicycled power films and events, holding public discussions and displays, and linking groups from different areas to help strengthen isolated campaigns.

The Coal Caravan departs from Sumac at 9am on Saturday.
Why not come and see them off, and maybe ride with them (part of the way) to Shipley Glen.

The last-friday-monthly Critical Mass bike ride gathers in the Market Square from 5pm
- Either take a short ride & return to Broadway for the 6pm screening & the discussion that follows
- or have a leisurely ride before the 8.15 screening at Broadway
- or head back to Sumac afterwards for the Coal Caravan launch

As part of the Transition Initiative in West Bridgford we are introducing the Green Streets Initiative and are looking forward to a great green Bridgford wide party! Every last Friday in the month, starting on 24th April, we invite people in West Bridgford to walk, cycle or use public transport and wear something green to celebrate.

Find links to all these groups, and more Not Stupid info at

It has just been pointed out that on the final day, Thursday 30th April, there is just one screening at Broadway, at 8.45pm (rather than 8.15). Note that there is no 6pm screening on Thursday.

See blog of Nottm Not Stupid events at

"Coming hot on the heels of the pre-emptive arrest of 114 climate activists at a school in Nottingham for allegedly planning a protest at the nearby coal power station, you might have expected the guests at Nottingham's Not Stupid festival to be a little wary. But actually the atmosphere was much more relaxed than that, with the Thought Police forgotten for a while in a big climate campaigners' love-in, with no fewer than 21 stalls from 21 different climate action organisations."

To organise your own indie screening see