An account of St Georges visit to 'The Trip' to open a memorabilia shop and the reaction of the media and the sparse crowd who attended this event on St Georges Day, April 23rd. 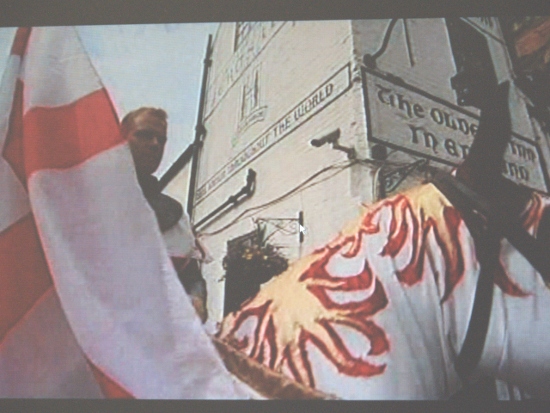 St George outside The Trip

Arrived at 'The Trip to Jerusalem' at 12:00pm to see St George open his new shop in the upstairs bar. Buy half a pint of Greene King (or as the locals call it “Greedy King”). A BBC man asks me why I am here. “I represent the Royal Society for the Prevention of Cruelty to Dragons”, he smiles but I bet that won't go out on the 6 o'clock news, the media wants this to be a serious day.

St George arrives on his horse, has a drink and poses for the photographers and a few tourists. He dismounts and goes upstairs to cut the ribbon. He walks past me after the ceremony. “Did you cut the ribbon with your sword?”, I ask. “No, I had to use a pair of scissors because of health and safety regulations”, he says rather sheepishly. The manager of 'The Trip' confirms this.

I go outside, a bloke from 'Smooth Radio' looks at my Elvis badge. “Elvis and St George”, I shout, he smiles and says, “a lethal combination”, then goes to interview an old couple draped in St Georges flags. After the interview, the old guy comes over to me and says “the turnout's disgraceful, if Bin Laden had been here on a camel, the place would have been packed. People don't know who St George is these days”, his shushes him. “Did you know one adult in ten can't identify a sheep?”, I say trying to get him off the subject. “I bet they could if it was a black one”, he snaps. His wife shushes him again.

They wander off towards the Square and St George rides off to Nottingham Castle. I hope the cops don't pick him up for being over the limit, that would really spoil his day. I get home and ring the Daily Star news desk and tell them about St George, the scissors and health and safety regulations. “Not for us” a voice say briskly at the other end. I ring a few more media outlets, people laugh but show a similar reticence to use the story. St George is being restored to his role as the national saviour in these days of doom and gloom and nothing is going to be allowed to undermine his dignity, certainly not Bin Laden on a camel, health and safety regulations or the R.S.P.C.D.