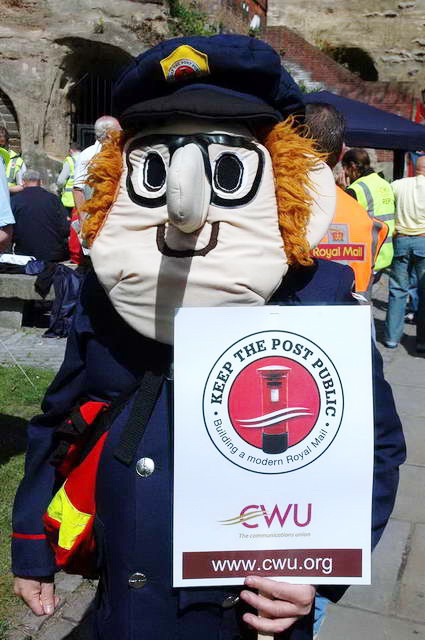 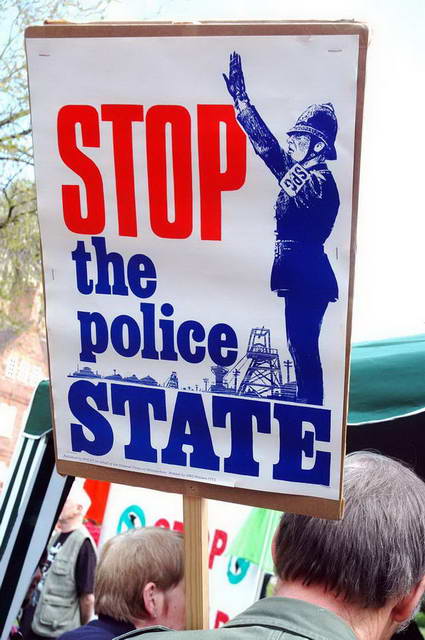 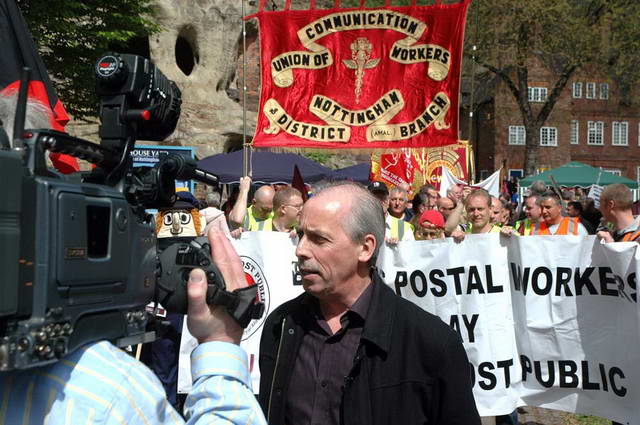 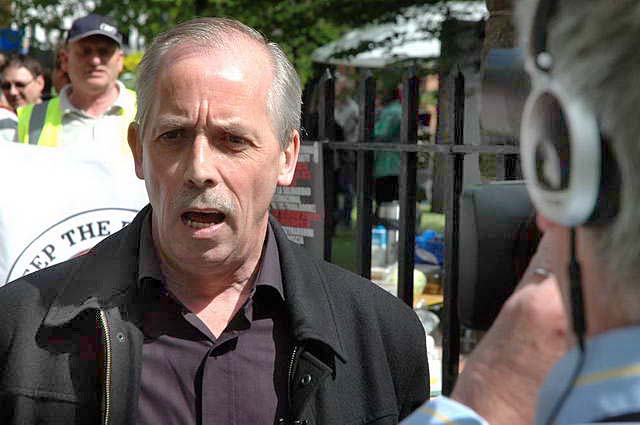 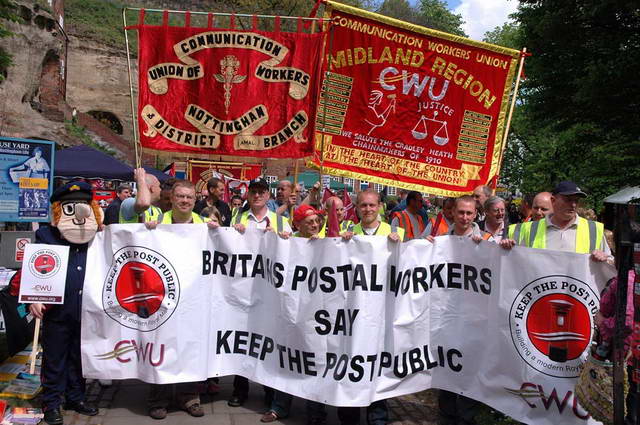 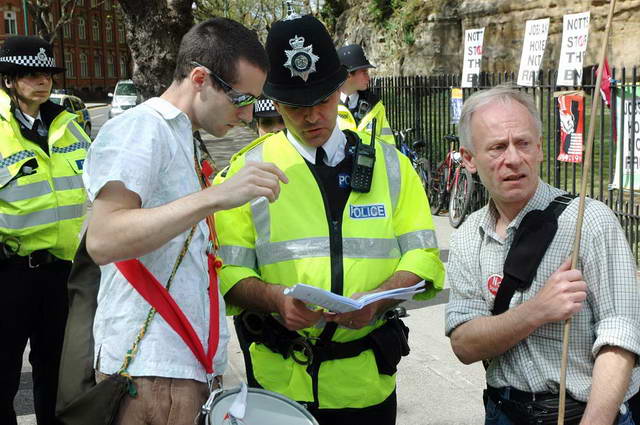 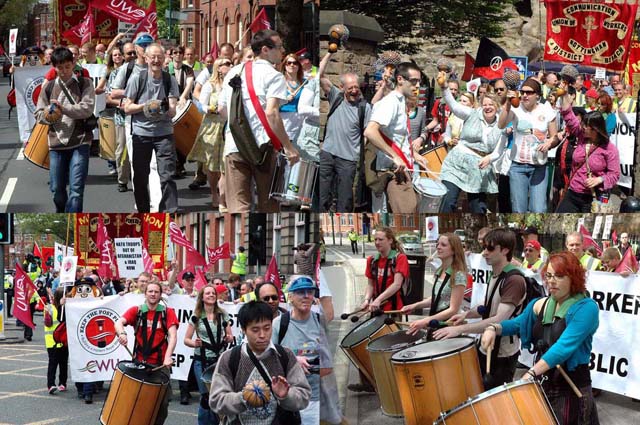 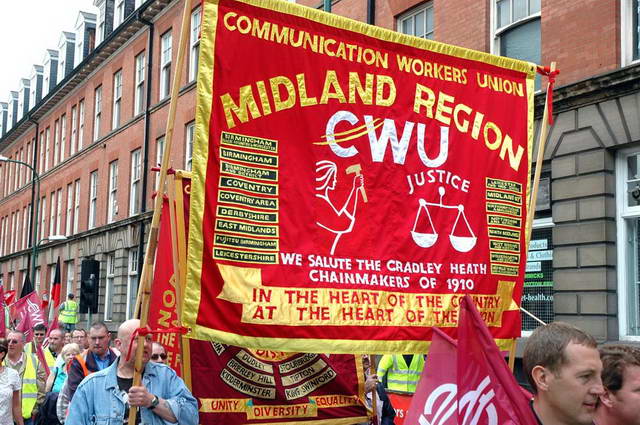 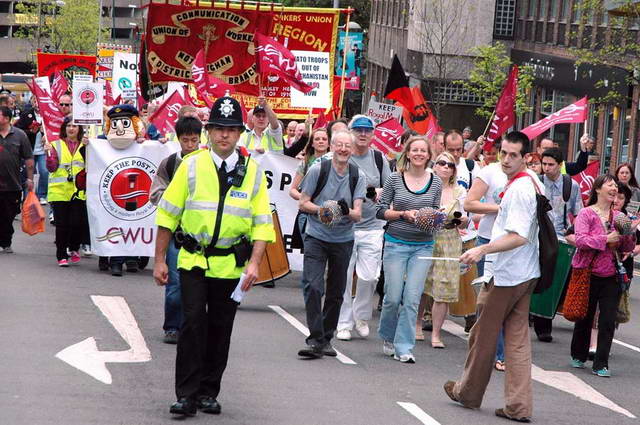 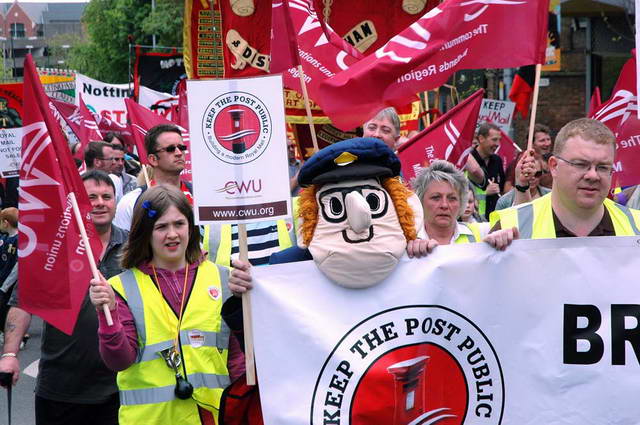 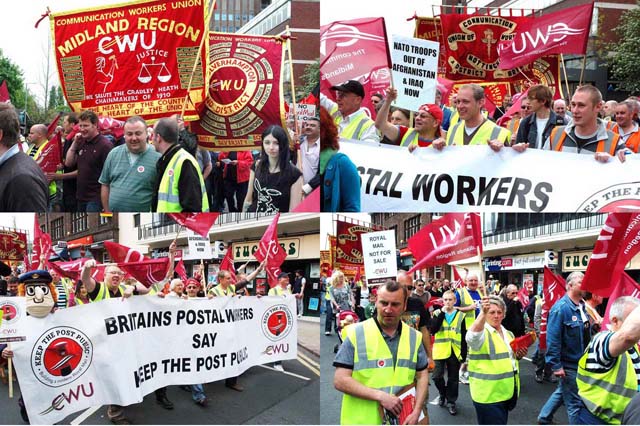 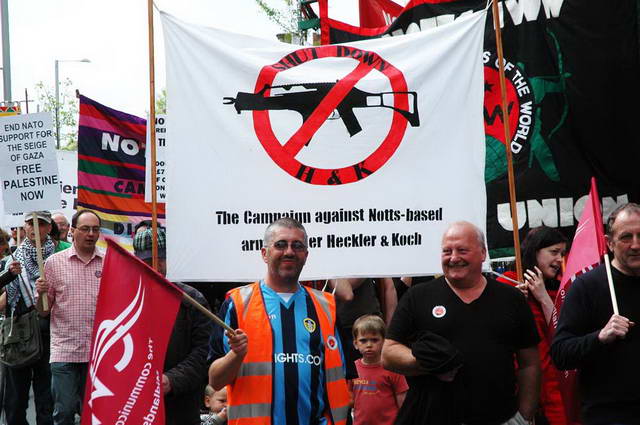 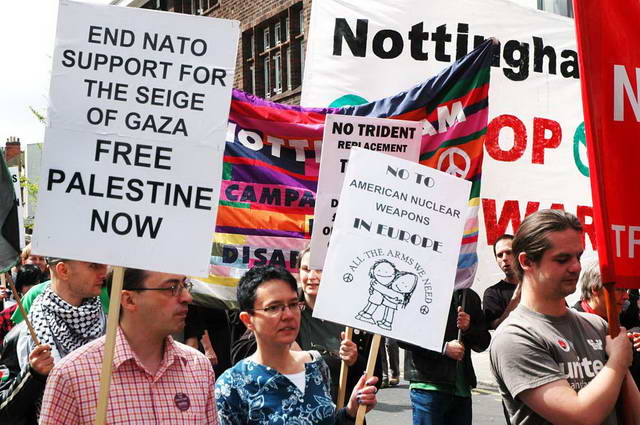 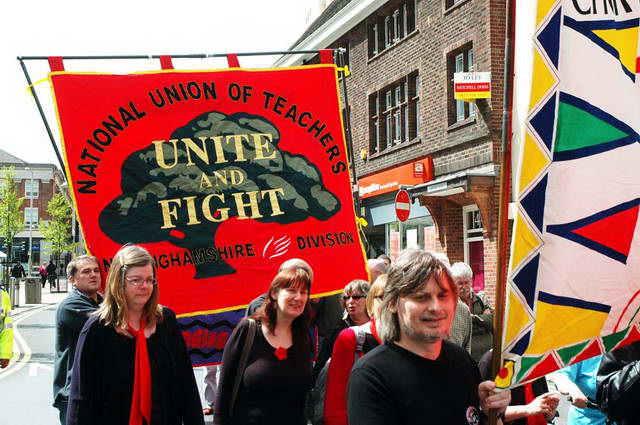 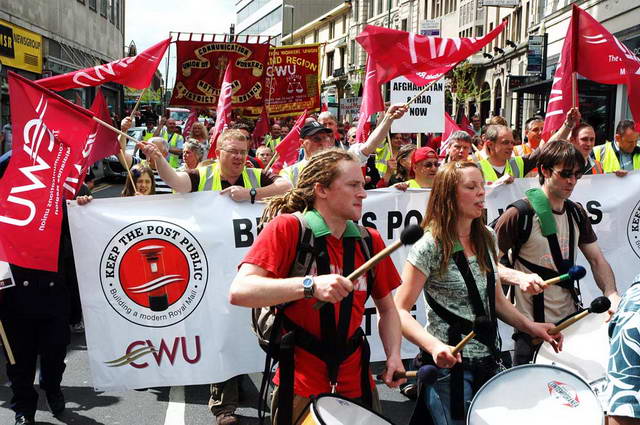 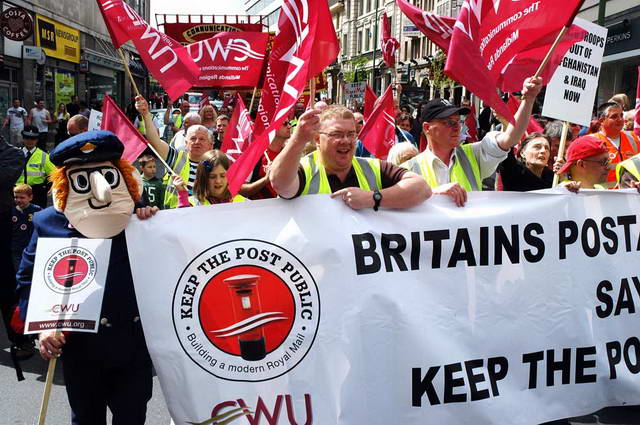 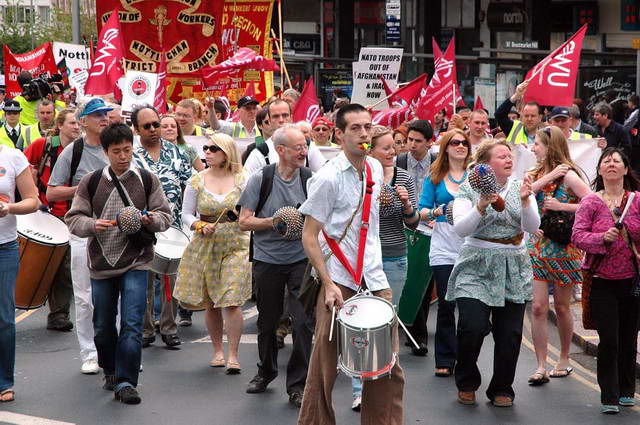 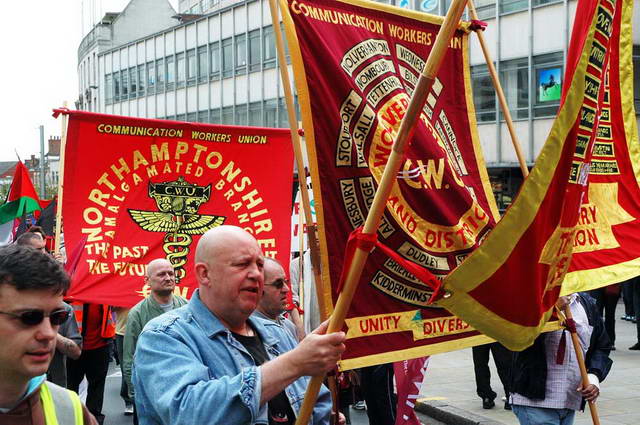 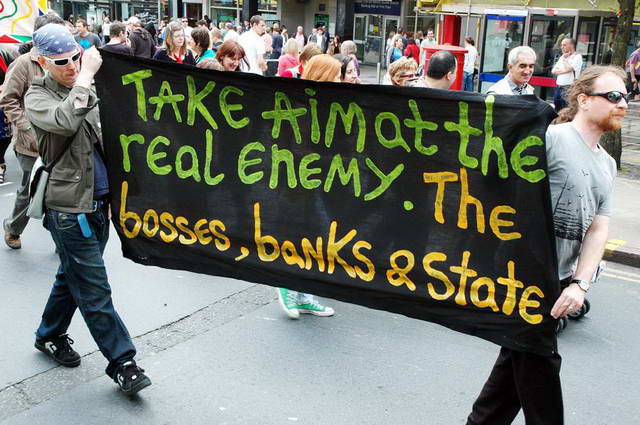 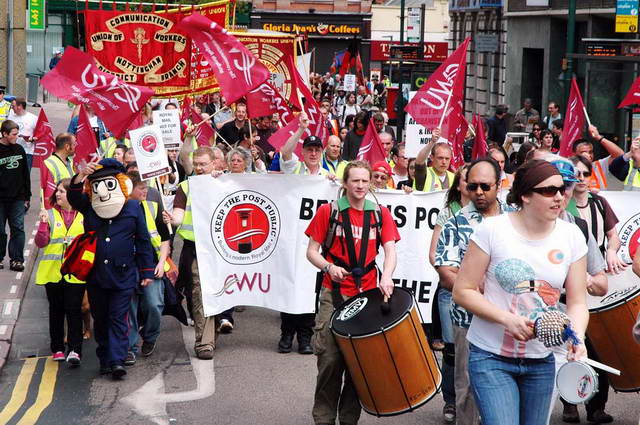 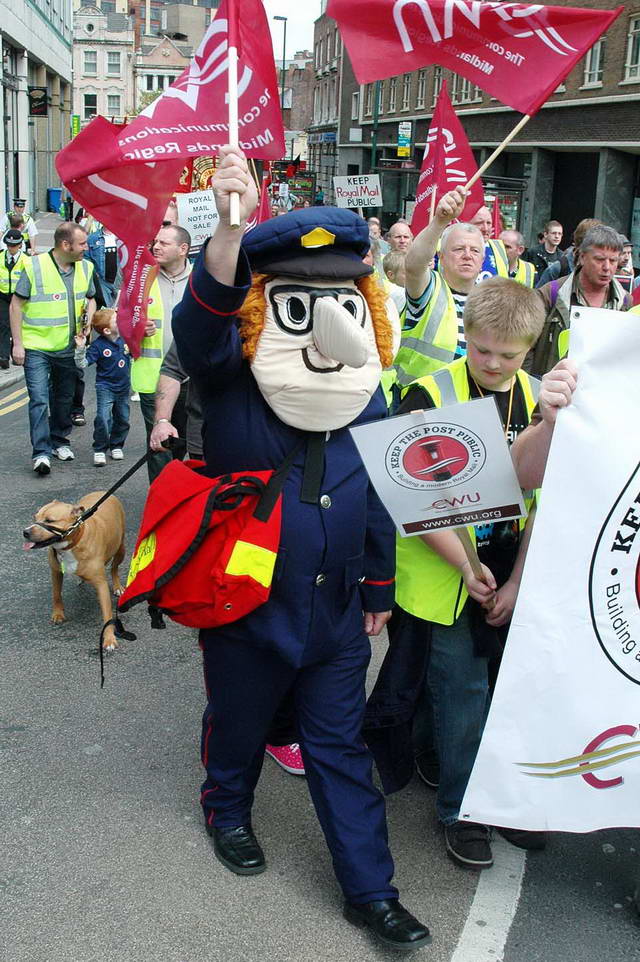 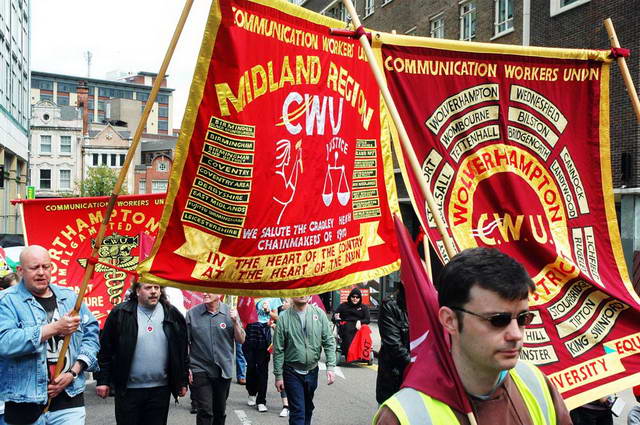 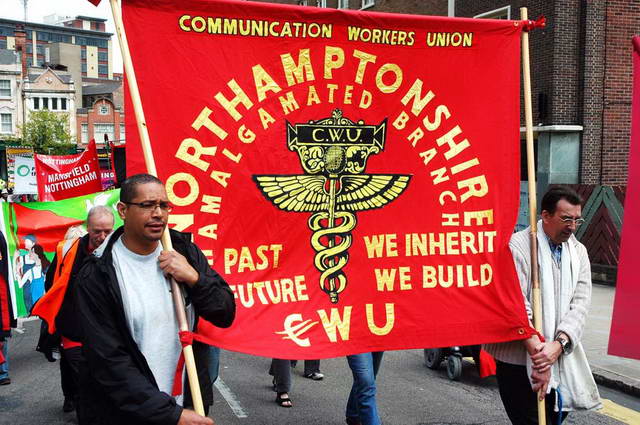 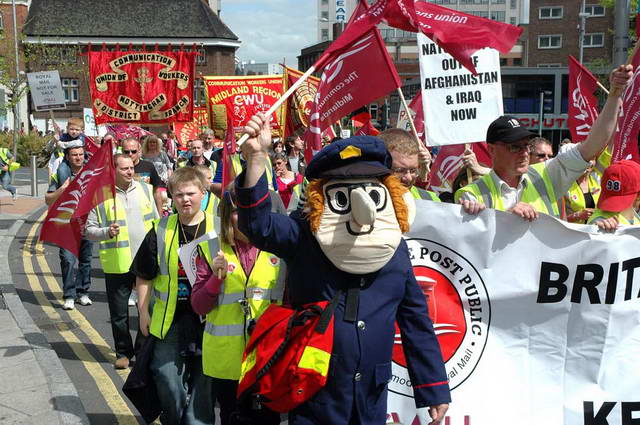 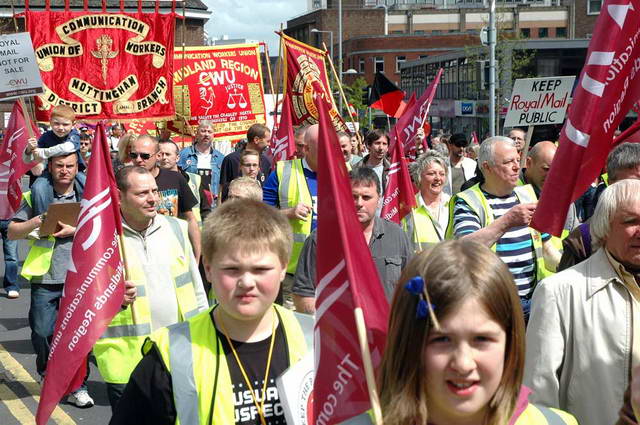 Many different groups and campaigns came together in a show of May Day solidarity. The object, to demonstrate opposition to racism, climate change, job cuts, asylum injustice, arms manufacturers and the oppression that we witness daily. Making connections between issues and celebrate our resistance to them. There was a main presence from the Communication Works Union, to draw attention to post office closure / redundancies / pensions / privatisation.

Meeting at Brewhouse Yard gardens (off Castle Boulevard, near the Trip to Jerusalem) around 11am. The march set off at 12 noon. The parade, lead by a local samba band, then paraded off towards the city centre and returned to Brewhouse Yard for music and speakers.

Music includes Wholesome Fish, 1st May Band (songs of protest and resistance), Ngoma or African roots music, The Score (Jam/Clash- type music from the Communications Workers) and Clarion Choir. So definitely something for everyone. There were a number of stalls representing different campaigns and groups.

May Day was celebrated as a pagan festival long before the Romans came. Then in the 19th century, it became the international worker’s holiday arising from the struggle in the US and Canada for an 8 hour working day:

“Lay down your tools on May 1st, 1886, cease your labour... for one day in the year. One day of revolt, not of rest! A day of protest against oppression and tyranny, against ignorance and war. A day on which to... enjoy eight hours for work, eight hours for rest and eight hours for what we will”.

In 1894, Nottingham held its first big May Day celebration, with thousands marching in strict Trade Union parades from the Forest. There were speeches from mining, hosiery and railway unions and from political parties. Resolutions were passed by an enthusiastic crowd.

Today, the industries are different, but the need for struggle against oppression, tyranny, ignorance and war is still there and not just for one day a year. It has become international and you can add global warming to the list. Nottingham’s May Day march is a relaxed event – we just have to avoid trams and buses - but in many countries, workers get savagely beaten up for attempting to demonstrate on their own streets.

Organised by the same bunch as last year - between them, folks are active in many local campaigns.

Nottingham had it's Mayday - Stop the War demo 2003

If the contributor has no sense of security and is willing to have his own picture lifted by redwatch and the state, that is his business, but if he has any respect for those he is photographing can he please obscure peoples faces before posting their images on an open site.
It is only good manners.
DTR

allover nottingham. People are aware this is a public demo, faces need to be obscured sometimes, but not on this.
Redwatch US server & site is down by the way, bizarrely at same time republicans went out of office in USA, coincidence

Redwatch is still up and working fine (unfortunately) - I just checked a second ago.

If you aren't going to blur the faces of people at a "public" demo then at least blur out the little kids that are visible in some of them.