Whilst not everyone's mug of chai, Glastonbury offers a good opportunity to engage with potential new supporters, so several like-minded crews will be hanging out in the Green Fields and welcome your support. 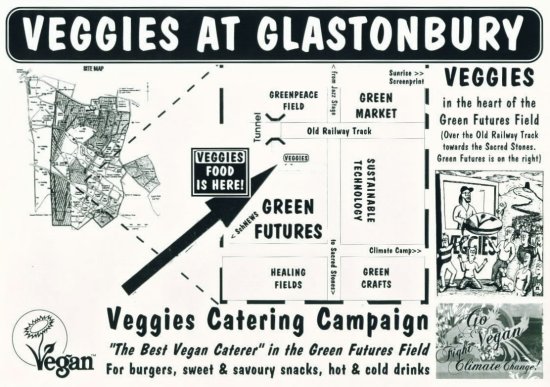 http://www.minimouse.me.uk/exhibition/1.html), this year the camping field alongside the Green Crafts field has been designated the Climate Camp field, so get along early, pop up your tent and join in with workshops and Climate Camp outreach.

Glastonbury veterans since 1987, Veggies of Nottingham always feature many of groups and events that they support alongside their campaign catering pitch.

This year Leeds/Bradford and Notts Indymedia will be running an Indymedia info and access point at Veggies in the Green Futures Field.

Drop in at Veggies for this, yummy food, video screenings, on-site vegan cake baking, and info on many other campaigns featured on Veggies 25th-Anniversary 2009 Tour, including:

http://climatecamp.org.uk/node/551
Indymedia - yer looking at it!

Lovely people as veggies may be, and well intentioned this is blatant advertising?!

UK ID cards by stealth rolled out at Glastonbury

Leader of the House of Commons Geoff Hoon has scheduled the first vote on the government's controversial ID cards scheme on Tuesday 28th June. In a convenient and sneaky move this will be the same day many MPs will mark the 200th anniversary of the Battle of Trafalgar, thus many MP's will be away from the House.

A succession of Tory MPs protested that the Government had deliberately timetabled the events for the same day to prevent MPs from attending both, but Hoon has dismissed their concerns as conspiracy theories.

Obviously media coverage of the Trafalgar event would overshadow the Commons' debate on the highly controversial ID card proposals and the former defence secretary is accused of seeking to "bury bad news at sea". The reasons - and emphasis - behind "why we need ID cards" keeps changing. This time around guarding against identity theft, a crime estimated to cost £1.3bn a year, was highlighted as the top reason ahead of strengthening immigration controls, guarding against the misuse of public services and (last year's number one) fighting organised crime and terrorism.

http://www.eu.fleishmaneurope.com/index.php have been hired to neutralize opposition to the implementation of the ID cards and respond to potential privacy concerns from the public and media. Documents prepared by the firm suggest that: "Political climate and shifting public perception require a proactive plan that mitigates possible public backlash". On 6th June 2005 the Home Office in collaboration with INTELLECT (the IT industry trade body), held an ID Cards conference entitled "Towards Procurement & Implementation". This event was sponsored by Atos Origin, Axalto, Detica, EDS, Fujitsu, Siemens Business Service, and Unisys.

http://www.intellectuk.org states its aim is to establish and deliver the vision and strategic objectives to improve the environment in which our members do business, promoting their interests and providing them with high value services, establishing and maintaining Intellect as the high profile, industry and public affairs focal point for the information technology, communications and electronics businesses. It describes its campaigns as "forming the PINNACLE of a PYRAMID of 150 programmes and issues that Intellect is currently pursuing on its members behalf. Both the Identity Cards Programme Director, Katherine Courtney, and the Head of Policy, Stephen Harrison, addressed the conference. Of particular interest was the talk entitled "Achieving Public Acceptance" given by Kevin Bell of Fleishman Hillard Public Affairs.

Meanwhile at a grassroots level it becomes apparent that ID cards are already a MUST HAVE for the festival going crowd. To gain entrance at the Glastonbury festival this year, Michael Eavis has decided that festival goers will have to produce compulsory photo id cards. These cards will include a photograph of the ticket-holder plus an electronic chip with their details.

http://www.citizencard.net. Remember that the centrepiece of the site is a pyramid, doubling as a stage, which is exactly a one tenth copy of the Great Pyramid at Giza, and is built over a ''blind spring'' (a place where the earth releases and absorbs energy). The present pyramid was built after its predecessor was destroyed by fire. Michael Eavis said of it "I can promise that the return of the Pyramid will be something special. This is the third one, the biggest ever and we really have got it right. It is going to be third time lucky. The Pyramid is unique and we hope that it will add to the festival's magic. Mean Fiddler now has a 40% stake in the Glastonbury Festival, The festival's traditional not-for-profit ethos, reinforced by its commitment to good causes is somewhat compromised by Mean Fiddler PLC's part-ownership of the event, and corresponding share of the net profit. Eavis's defence takes the form of a strong emphasis on positive PR in order to ensure that public attention is focused firmly on Glastonbury's more friendly aspects.

In addition to the ID cards, Glastonbury festival organisers employ constant CCTV monitoring of all areas of the festival, car parks and local areas: Facial recognition technology and the Livescan system - a way of capturing fingerprints by computer and transmitting them directly to the National Automated Fingerprint Identification System (NAFIS). This enables a live, immediate identification to take place against a database of six million people. This must surely make Worthy Farm and the surrounding area the most heavily monitored mini police state in the world, and a prime example of SOFT POWER in action.