on Wednesday June 24th at 9.30am at Nottinghamshire County Hall, Trent Bridge, Nottingham. A Demonstration against the Notts Police Authority meeting had been organised. The object, to demand that the Notts Police are Accountable for their recent actions. 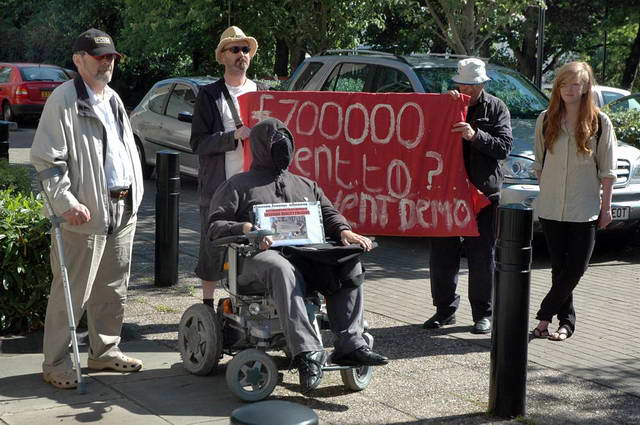 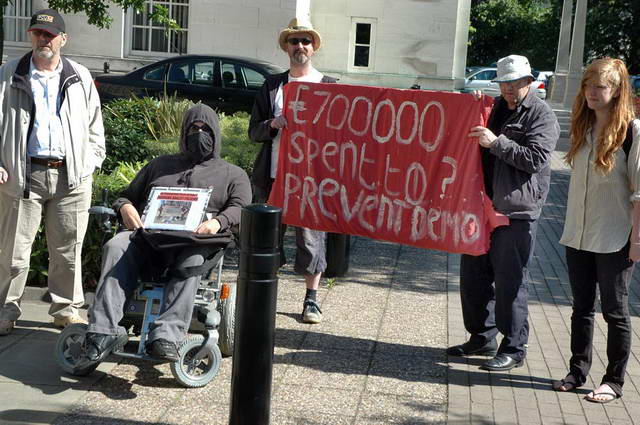 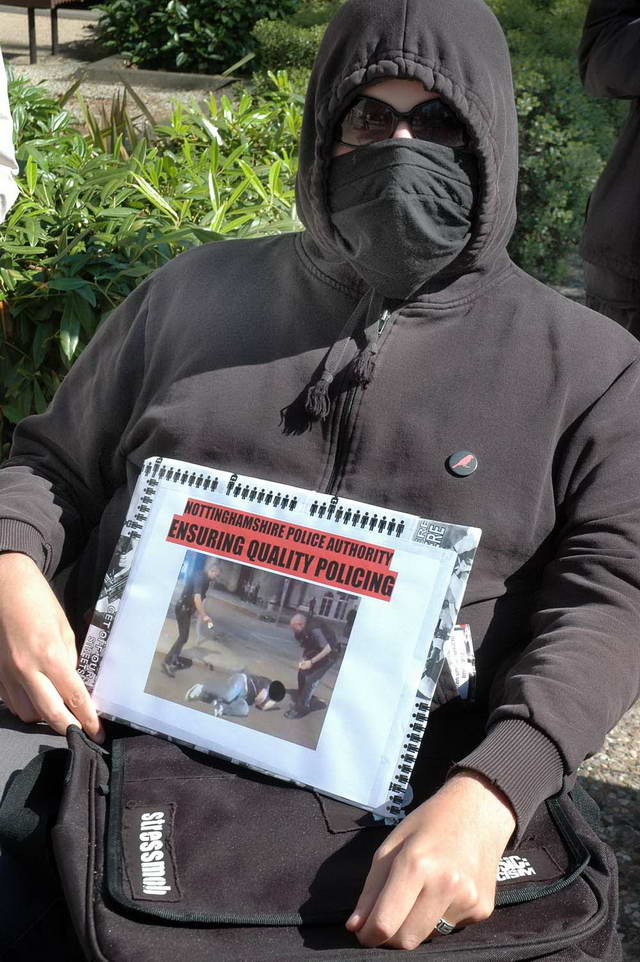 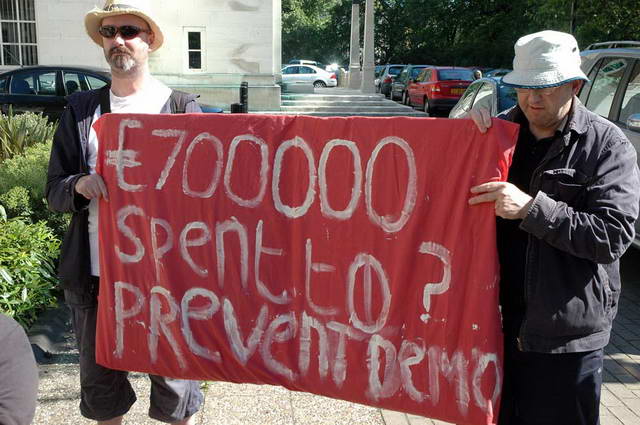 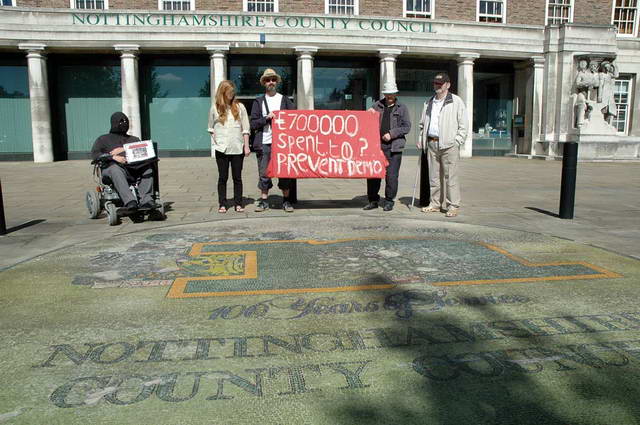 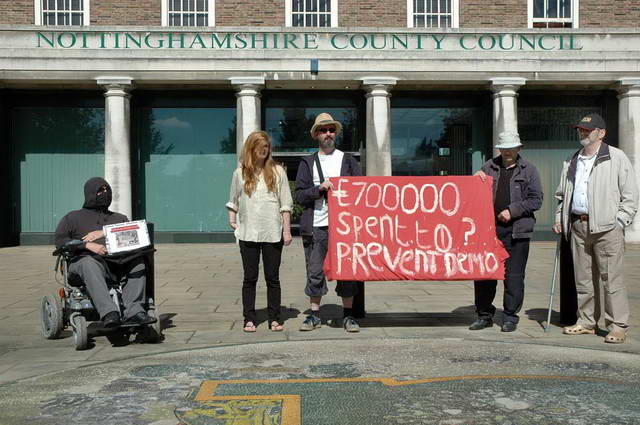 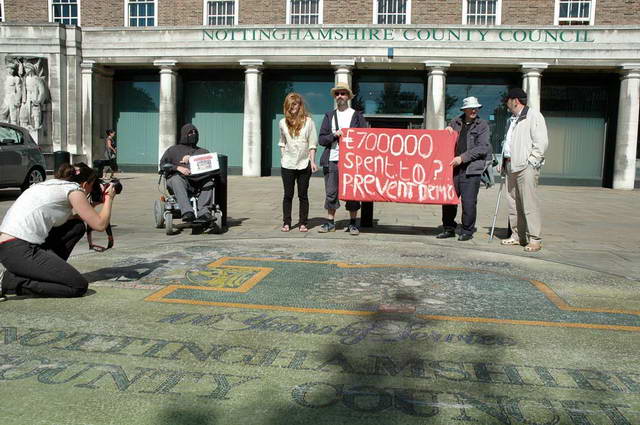 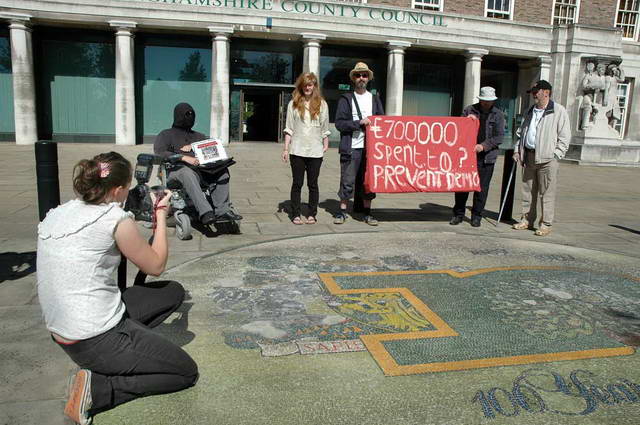 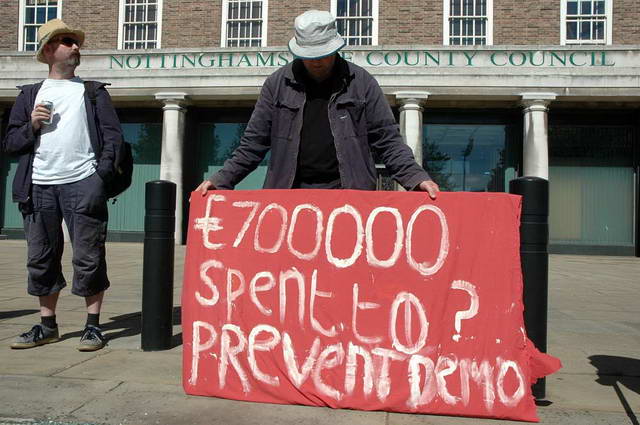 on Wednesday June 24th at 9.30am at Nottinghamshire County Hall, Trent Bridge, Nottingham. A Demonstration against the Notts Police Authority meeting had been organised. The object, to demand that the Notts Police are Accountable for their recent actions.

It is important to protest against the £700,000 bill for Operation Aeroscope on April 13, 114 people were arrested, when it was said, for planning a protest. But so far no one has been charged with any offence.

114 activists had been arrested in a 2am police raid on a community centre and school on Sneinton Dale, Nottingham, early on Easter Monday, 13th April 2009.

At that time, it was believed that a demonstration was planned at the E.On power station at Ratcliffe-on-Soar as a spokesperson for the company claimed that it was the "planned target of an organised protest". The Ratcliffe-on-Soar coal-fired power station is the 3rd largest source of carbon dioxide emissions in the UK and has been previously targeted by activists. Similar to past police actions, some of the homes of those arrested had been raided while they were held in custody. It had been confirmed that 6 homes have been raided in Nottingham, including the Sumac Centre, and personal paperwork and computers have been seized. Activists being released on bail, to appear in court between the 14th - 21st July, with a variety of conditions.

The initial action was at a school / community centre in Sneinton Dale, and eastern suburb of Nottingham. After all present were arrested and dragged in chains to many and various police stations, the police mounted a long and protracted search of the building, where the meeting had been held. The size, duration and resources deployed made for a significant bill against public funds. I wonder, considering this expense if such a police operation may eventually lead to changes, I suspect not, but we'll see later next month.

People were also most concerned at other police misdeeds including deaths in custody, and the tasering of a man in Upper Parliament Street, earlier this month

Mass Arrest of 114 Climate Activists in Raid in Nottingham : The pictures

Thats one demo where there will be no dispute about numbers. Five people plus
two photographers (also people). But where are the cops? That person in the wheelchair
looks dangerous.

nice demo,well done, apologies I couldnt be there had an a emergency

police have been ordered to act like Eons private army it seems & its being paid for by local taxpayers money. This will continue to be a issue & is already a story.
Yes it was on a week day & most people who go on actions like this also hold down jobs paid & voluntary, or working at glastonbury, unlike the moaning scapegoaters who watch junk telly & moan about assylum seekers& the black
The facemask is for anonanamity against big brother, to some people that doesnt look appealing, maybe a good point.
Police shouldnt be ordered to be a private army for corporations like Eon which isnt even owned by many people in the uk.
The mass public support on the eon issue when it happened & the taser incident publicised via media you tube etc proves there is mass public support against these undemocractic actions.

Police say they rely on public support to help maintain good order, we dont live in real democracy yet, but this can be true, metropolitan police& now nottingham police have lost a lot of support recently in alot of quarters by their own actions.
RE the taser incident, why didnt they simply cuff his legs instead of tasering him?.Dont they teach the police martial art holds?

Thanks to those who turned up - you are representing a lot more who couldn't make it, and who are fed up with police violence.

Waring a facemask can be a good statement against the constant surveillance we
are under, but people who use it really ought to try to explain their reasons. A very
large number of the public, quite innocently, dont get it. It does after all, look scary.

the dull thud of

covering your face can be an attempt to protect your anonymity/privacy - posting your reasons why on the internet lessens that, and also draws attention when perhaps that's not the point of the demo (or should be for the IMC discussion!). People blur faces for images on IMC, but when you're intentionally letting yourself by photographed by the mainstream, you have to 'blur' at source, hence masking up.

Think about it, rather than expecting the people who did it to explain themselves...and if you're not sure why, then just get over it, it doesn't matter! Expect that the people who do it understand the negative aspects of doing it, and have still decided to do it.

photo me quick, im an anarchist!

Thats my friend ***** in the photo with **** face covered up. **** is a dedicated political activist. The government spy on political activists (sorry if that news hurts you, or your jumped up sense that you actually have real, tangible liberties within the capitalist system, you have choices, but not real freedom) and so it makes complete sense to cover up, less a photo of you appears in a comptuer file at MI5 HQ.

And if you dont think that happens, you should read REAL history on spying by the british state on anarchists/communists/activists, THROUGHOUT HISTORY, not just today.

Although I am not saying ***** is an anarchist, BUT speaking as a self professed anarchist, I would say to everyone, please cover your face, protect your identity from further state intrusion.

mask up and move onwards!

PS. i dont appreciate any negative/derogatory attitudes about my comrades physical appearance - seperate from their face being covered - so please don't sink to levels of school yard stuff......thanx

Ze should've also worn gloves - the ring can be used to identify if they are ever picked up.

Thanks for the demo

Thanks for turning out and representing the concerns of many more than were unable to make it.

Some were away at events elsewhere. Many would have been at work in other ways.

At least 114 people couldn't attend due to previous police excesses, and are still waiting to hear if there are even charges to answer. Arrested because police 'intelligence' (sic) suggested that they were thinking about taking part in a demo. 'Intelligence' that resulted in the malicious smashing up BY THE POLICE of a nursery school.

One person no doubt kept away for fear of being kicked, punched and tazered BY THE POLICE, even if lying curled up and prone on the ground.

(At least) one person couldn't make it due to having recently died in police custody.

Many may have stayed away because they intend to continue to resist the police state, to defend the so-called 'right to protest' and to work for a sane and safe future, or at least any future at all.