Wednesday 12th August at 17:15pm,
By the Left Lion in Nottingham Market Square 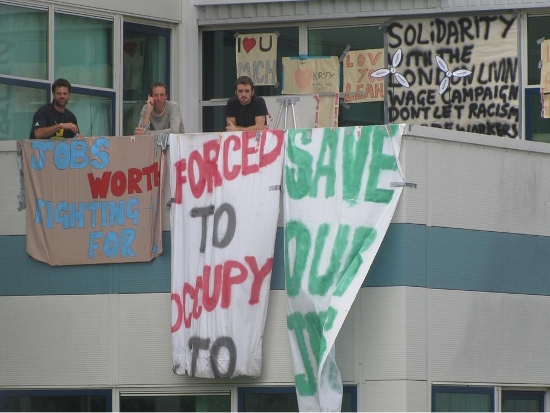 Wednesday 12th August at 17:15pm,
By the Left Lion in Nottingham Market Square

As the workers continue to suffer the fallout of a recession not of their making and as the unsustainable ecological destruction of the planet continues apace, we applaud those who are willing to resist the swinging cuts that we are all expected to accept.

The Vestas worker’s may have been evicted from their factory occupation. However, the fight to keep the factories open, to save jobs, to win a better redundancy deal and the need to highlight the massive damage treating the planet as just another externality of capitalism all continue.

Join us in the Market Square as part of a nationwide show of solidarity with the Support Vestas Workers' day of Action and with the Nottingham activists currently on the Isle of Wight.

Some placards and collecting tins are available, but please feel free to bring your own along.

The attached flyer may be good to distribute at the rally?