This a 1,300 word report of the anti-BNP protest in Codnor on Saturday 15th August with 20 photos. 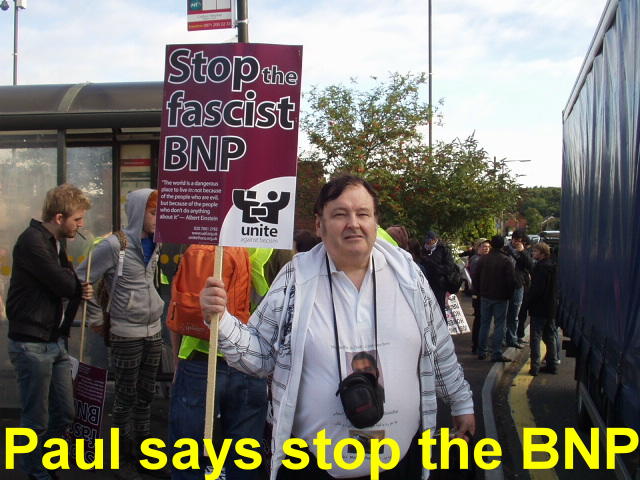 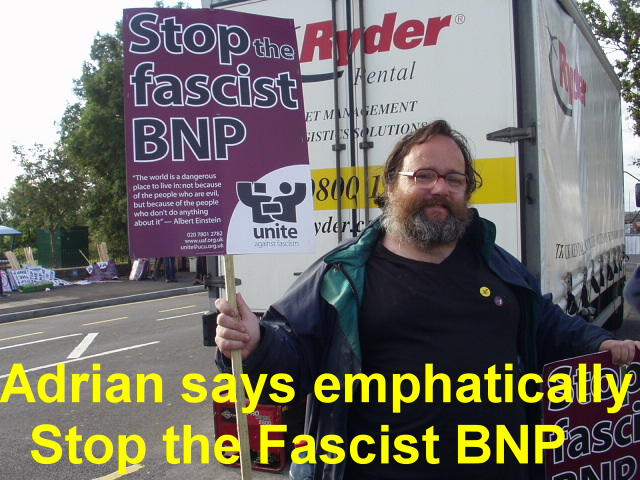 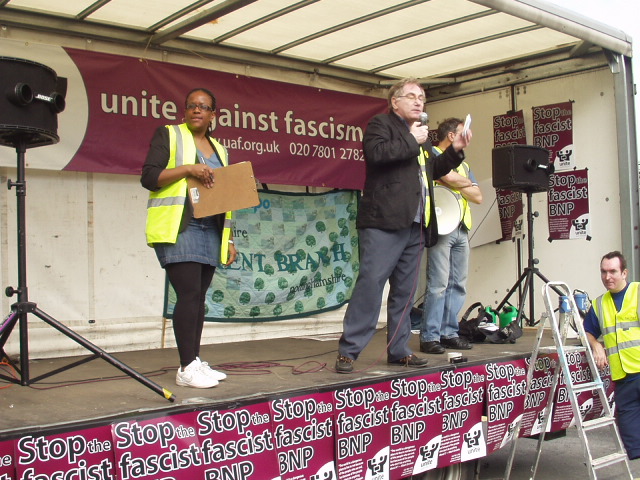 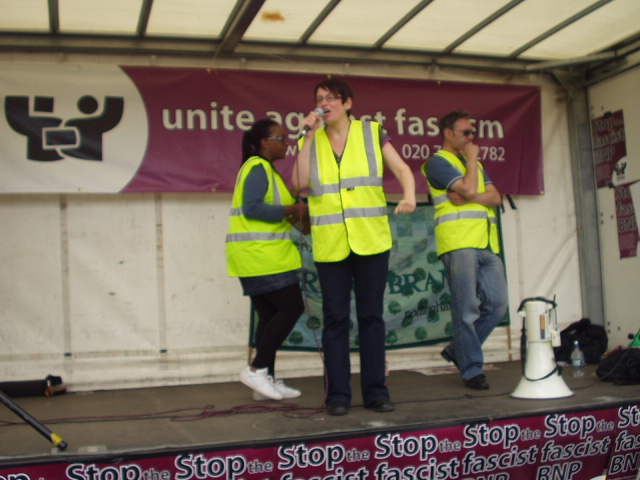 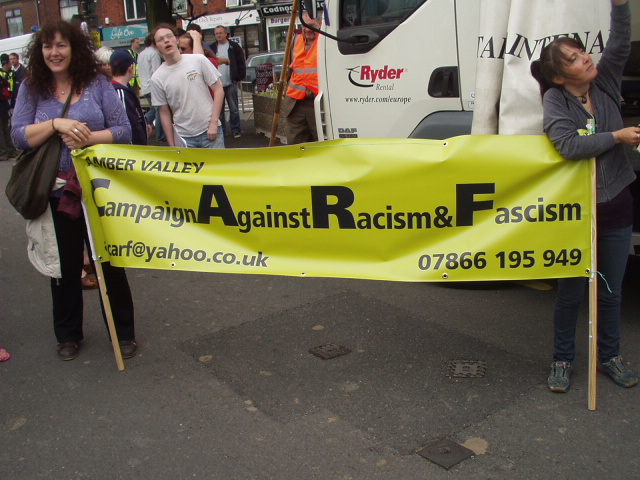 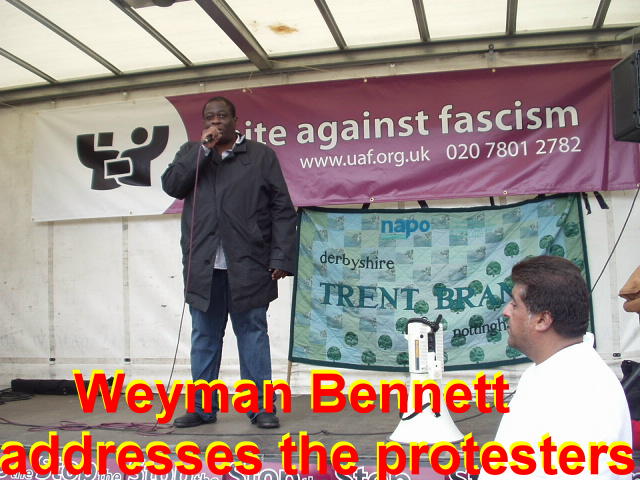 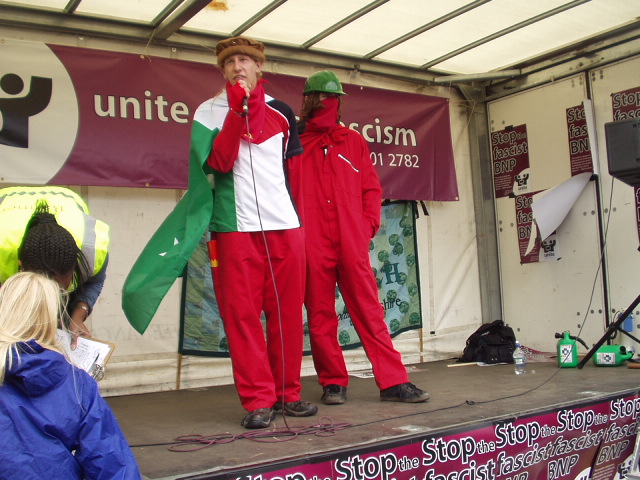 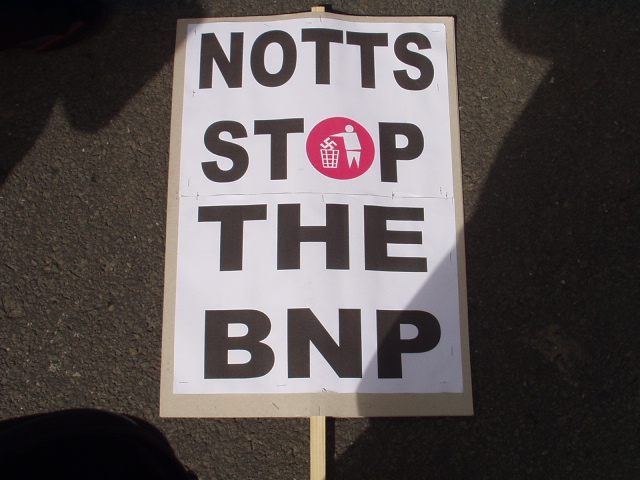 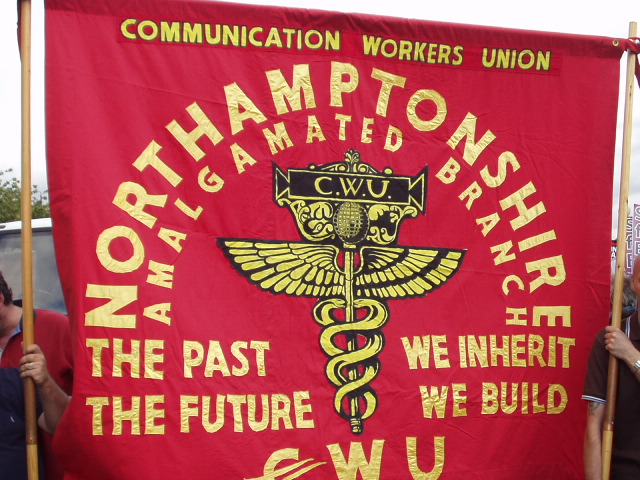 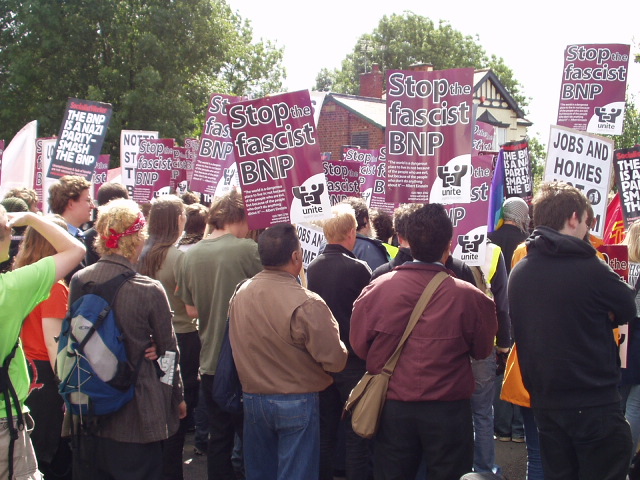 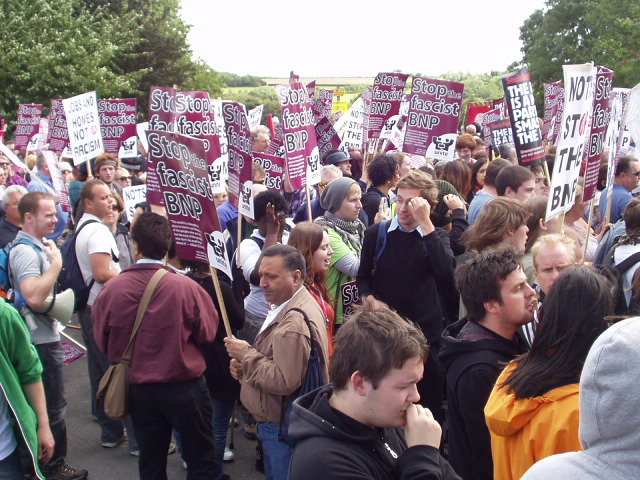 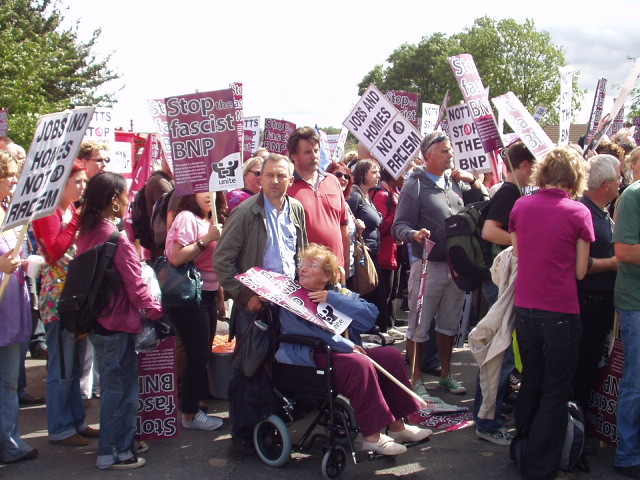 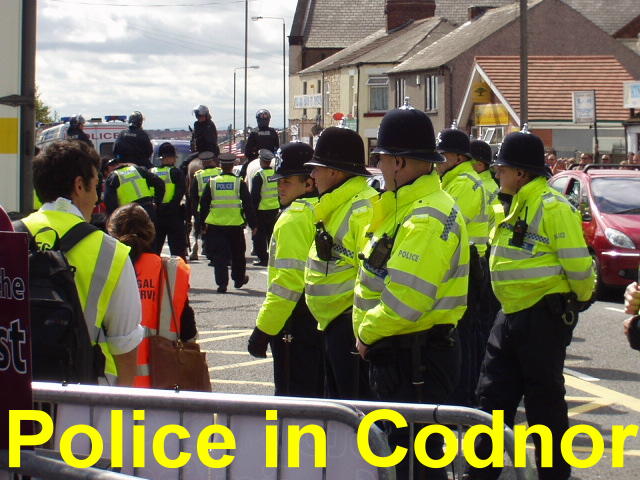 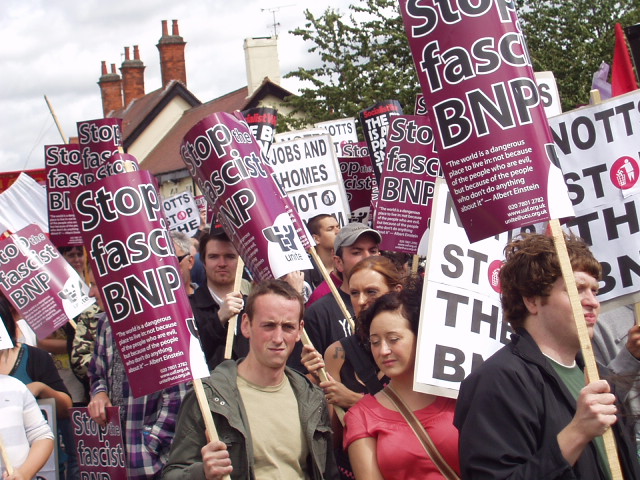 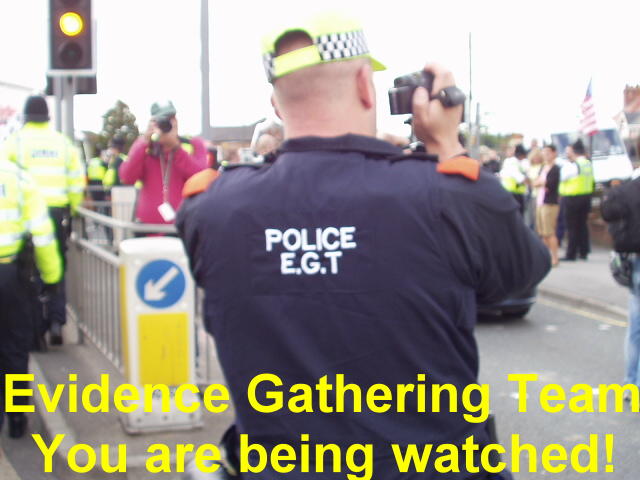 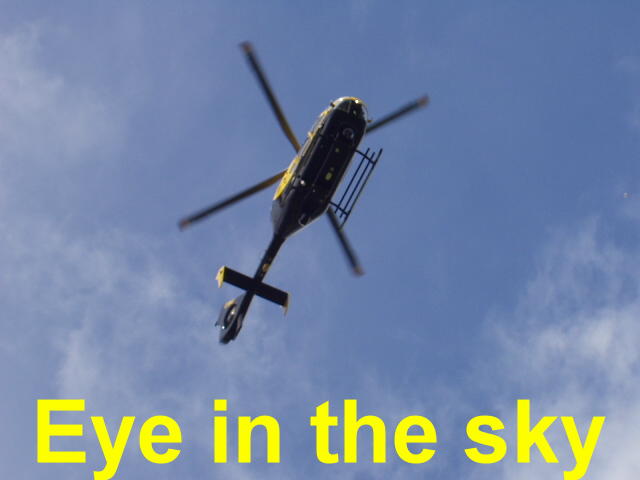 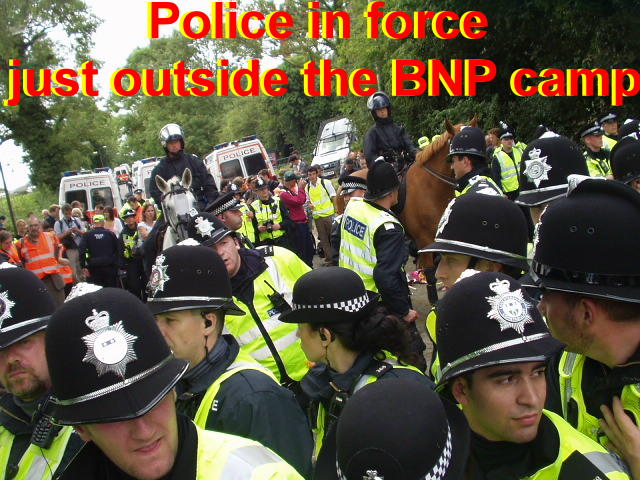 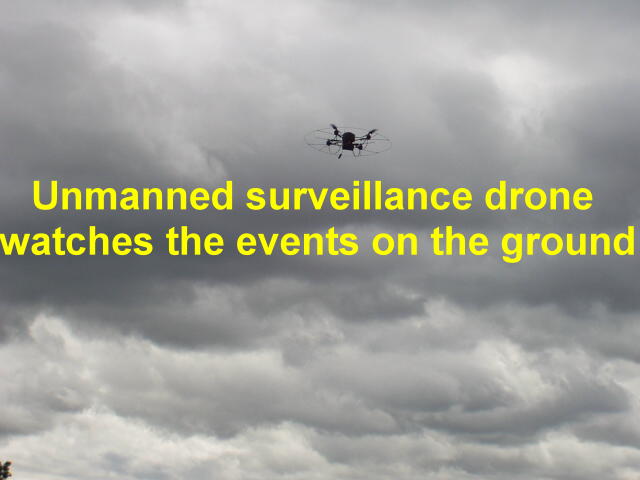 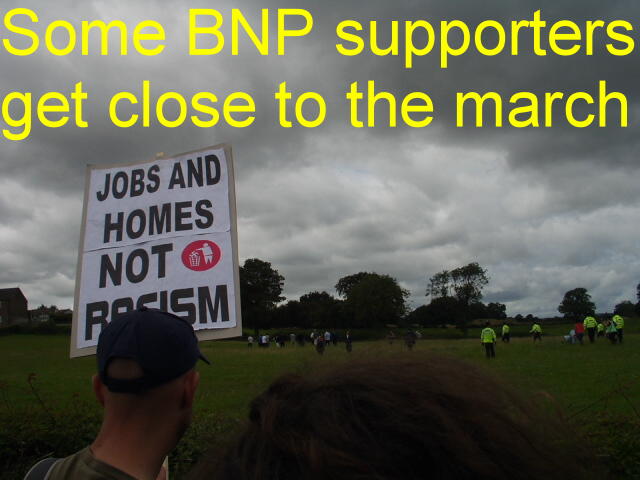 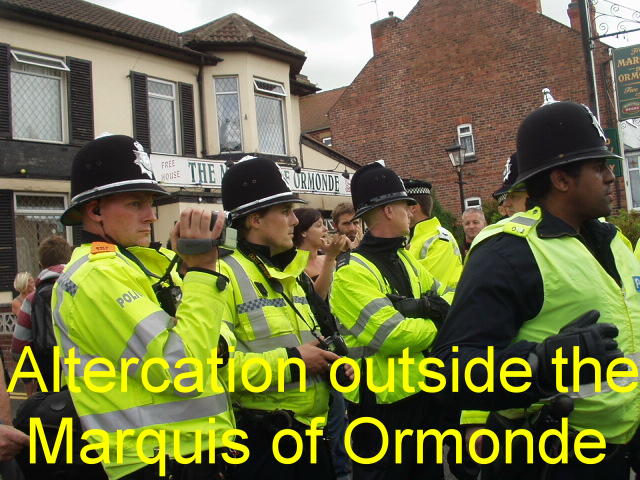 The far right British National Party held its annual `Red, White and Blue` (RWB) rally on a farm just outside Codnor in Derbyshire in the English East Midlands on the weekend of August 14th – 16th 2009. It was billed as a `patriotic family festival` but was in reality meant to be a magnet for fascists and neo Nazis from Europe and North America.

Around 2,000 demonstrators converged on the small, former mining town of Codnor in the Amber Valley. Coaches arrived from far and wide including two from Scotland carrying people from Glasgow, Edinburgh and Dundee. There were protesters from the fairly local town of Nottingham, about 14 miles away, and from London, Leeds, Hastings and Derby.

It was reported on the UAF (Unite against Fascism) website that `Anti-fascist protesters in Scotland heading to Codnor, Derbyshire, to demonstrate against that day’s BNP rally were quizzed by police officers in the early hours of the morning as they boarded their coaches in Glasgow.

Jonathon from Glasgow said:
"I've travelled to countless demonstrations leaving in coaches from this point over the past few years. I've never experienced anything like this on any other demo. I declined to give police officers my phone number. There is nothing illegal about demonstrating against the BNP and we should not be treated like this."


Early in the day around 8.30am a number of demonstrators were arrested under section 14 of the Public order act of 1986. Apparently this was for straying out of areas designated by the police. Happily all were released without charge later that day.

It was announced to loud cheers that the French fascist leader Jean Marie Le Pen had been prevented from reaching the BNP event and that the American white supremacist Preston Wiginton had been turned back by immigration control.

The day started with a number of speeches made from a truck in the centre of the town. Notable speakers included Weyman Bennett, joint secretary of Unite Against Fascism (UAF) who said:
"This was a great day for anti-fascists. We brought more protesters to Codnor this year than the numbers the BNP managed to attract to its 'festival' of race hatred. They had fewer people attending this year because the protests drove away their softer supporters.
"Protesters also managed to cause real disruption to the event by making it difficult if not impossible for the BNP's supporters and guest speakers to get into the event.
"Today we saw what can happen when black and white, young and old, Muslim and Jew, gay and straight, come together in unity to fight the fascist BNP. We now need to build this anti-fascist movement in every locality where the Nazis are active – and drive the BNP out of town."


There was an open mic session and a large number of speakers addressed the crowd.


Paul O’Hanlon of Edinburgh Stop the War said that the reason he had travelled to Codnor was to oppose the BNP. Admittedly they were small but the job of the demonstrators was to see that they stayed small and got smaller and smaller until they were gone. He also reminded the crowd of the ongoing peace vigil by Parliament Square peace protester and anti-racist Brian Haw who will clock up day 3,000 of his protest next week on August 19th. He mentioned Iraqi journalist Muntadhar al Zaidi who had been sent to prison for throwing his shoes at George Bush in December last year and Muntadhar got a loud cheer.


It was rumoured that the BNP gathering in tents in a field amounted to around 200 people. The protesters could not get really close to the event and the media were tightly controlled and those who were admitted were each assigned two minders. So what was their assemblage like?

Reporting in the Independent on Sunday, Rachel Shields writes:
`A man wearing Islamic dress and an Osama Bin Laden mask poked his head through wooden stocks and was pelted with sponges for his trouble, while a neighbouring stall did a roaring trade in golliwog mugs and Union flag badges. This was not your average summer fete. A bouncy castle and ice-cream van did little to lighten the mood at the British National Party's festival yesterday.
BNP members, huddled under tarpaulin and shivering in their shorts, appeared less than thrilled by the grey Derbyshire skies and chill breeze that heralded the start of their annual summer gathering.
Snippets of chants from the protesters drifted across the site. Refrains such as "What shall we do with the BNP? What shall we do with the BNP? String them up like Mussolini" created a sense of unease, although the voices were frequently drowned out by the constant whirring of a police helicopter circling overhead. `


After the numerous speeches had been heard the demonstrators marched in the direction of Denby where the BNP camp was situated. The police presence was very heavy with around 500 officers from various forces in attendance. There was also a police helicopter constantly hovering overhead along with an unmanned surveillance drone. The marchers had placards reading `Stop the Fascist BNP` , `Jobs and Homes not racism` , `The BNP is a Nazi party, Smash the BNP` and `Notts Stop the BNP`. There was a loud chanting of `Griffin, Griffin, out, out, out! ` and

`Recession, inflation,
They’re not caused by immigration,
Rubbish, come off it,
The enemy is profit`

The marchers walked the two miles to the field near Denby were the BNP was camped but were prevented from confronting them by a very heavy police wall including cops on horses. After about an hour the protest marched back to Codnor and on the way about a dozen BNP supporters jeered and made gestures from a nearby field. They were kept at a distance by the police. Further along there was an altercation outside the Marquis of Ormonde pub when a young woman shouted obscenities at the marchers and several women shouted back – referring to the BNP’s comments about rape.
There was a sit down for about half an hour at the junction of Denby lane and the main road to Codnor as everyone had a well earned rest and waited for a group of 250 other demonstrators to join up.

The protesters marched into the centre of Codnor where they boarded their various coaches home. There was an uneasy atmosphere as a number of BNP sympathisers assembled outside a pub and looked rather aggressively at the demonstrators but no trouble ensued. The coaches back to Scotland went first to the police station in Derby where the previously arrested protesters had been held, after a short while they all released without charge.

The media as usual made much of the fact that there some arrests, the Sunday Post had a piece on page two headlined `Anti-fascist protestors attack cops` while the Murdoch owned News of the World had a small item on page 14 headlined `19 held at BNP demo` . The Derby Telegraph of Saturday 15th August had a half page piece on page 2 headlined `Mock graves for the white race victims` laid at BNP festival, there was a photo showing 30 white crosses beside a BNP tent. The Independent on Sunday had a full page article on page 30 headlined `Tea and mugs at the BNP garden party` in which reporter Rachel Shields described the BNP event from the inside.


The day should be considered a success as the anti-Nazi message was made very emphatically and the BNP were prevented from entering or leaving their camp for several hours and would have heard the anti-racism chants very loudly showing they were not welcome in Codnor or indeed anywhere.

Interesting report, sounds like a reasonably successful demo, although I'm always sceptical of the UAF/SWP "march, speech, chant, go-home" brand of "activism". It sounds like some sections of the demo were more militant and tried to push back police lines and block roads, good stuff. But - the massive "DENIAL OF SERVICE ATTACK" which closed down the BNP website for three days during the Red White and Blue shows that cyber-activism can also have a role to play in harrassing the fascists - there's more than one way to skin a cat (or to piss off a fash!).

Well done for giving Redwatch some new images for their site. When posting anti fash demos, either blur peoples faces or don't publish them.

"Unemployment and inflation
Are not caused by immigration
Bullsh*t, come off it,
The enemy is profit"

Minor difference, but it scans better. ;)