The power of simple subvertising was demonstrated this week when a little cut and paste work on a few billboards became a national media story. Elevated from a being noticed by just a few passers by to tens of thousands of readers and TV viewers, the subvertisement of poppy appeal posters has apparently hit a chord.

More than any other flag-day emblems, even the little lifeboats of the RNLI, the poppy stirs deep emotions with its connection with the brave generations who laid down their lives for this country.
Last year the 26 million poppies sold in the appeal raised £30 million for the Royal British Legion’s charitable work. Politicians and TV personalities compete over who can be seen earliest wearing a poppy for fear of being picked on by the tabloids as some kind of national traitor for daring to be seen without one. This year is no different, apart from the outrage being expressed at having some of the billboards subverted to call for the troops to be brought safely home and for Tony Blair to be prosecuted for his role in sending them out to invade first Afghanistan and then Iraq.

The BBC and the Telegraph report it as 'protesters attacking former prime minister Tony Blair's war record', not a bad way to extrapolate from the two words 'Prosecute Blair'. Their article quotes a spokesman for the Royal British Legion saying, "We do understand that the current campaign in Afghanistan and the recent activities in Iraq are not popular universally in the country. Opinion is divided but we do find that the public is four-square behind our British Armed Forces who are out there representing their country and making sacrifices."

The Daily Mail label it a 'mark of disrespect' and quote a passer by as saying, "It was so cleverly done I thought for a moment the British Legion had suddenly become political'. However the Royal British Legion this time are quoted dismissing the 'vandalism' as a 'bit of fun' - "We would say to whoever did this that we hope they feel they have had their bit of fun. We would never discuss the rights or wrongs of conflicts.'

The Royal British Legion has thoughtfully provided the media with the details of 22 year old war widow Hester Wright, 22 and her six year old son who together had held a photo of her late husband in one of the posters. Her 23 year old husband, Private Damian Wright was killed in Afghanistan in 2007. His mum was prompted to say what she thought of her son being 'dishonoured', and loaded question aside, Debbie Smalley obligingly said, "The British Legion do a great deal for ex- servicemen and widows and they are not political. Whoever did it should be ashamed."

A local paper in Nottingham picked up the story also, leading to a flurry of outraged comments from readers picking up from where the angry article left off.

In a local rag from Kent where the story seems centered, Jenni Horn writes the campaign up as one of thoughtless vandal's defacing posters and suggests the act dishonours those who have died (and have yet to die) 'serving for our country'. Her article quotes Royal British Legion member Alan Collins who appears angered at the politicization of the poster. He says, "The Poppy Appeal isn't about arguing about which wars are just and which should never have been entered into."

Meanwhile Kent police say they are investigating and call on members of the public to phone a police hotline with any information which might implicate the 'criminal' responsible. Chief Superintendent Steve Corbishley of Medway Police said, "Whilst we support people's right to share their opinions this must be done in a legal, peaceful and respectful way."

I looked at the link to the Dailymail story on this and read the comments, expecting the usual "soap dodger" comments, but was plesantly suprised to see lot's of people, service men and women in particular writing comments in support of this action.

Well done to the culprits ;) you have successfully trod a fine line here and exposed a seam of national dissent to the wars in Iraq and Afghanistan; everyone wants to see their friends and family home safe and well.

The corporate media like to make out that almost everyone in the country wants the wars to continue, but they have been caught out at their own game here. The tabloid papers conflate war dissent with contempt for troops. They are the real victims here, the military have massive recruitment campaigns in all the poor areas whilst the tabloids beat the war drums. Fuck that, why not send some hack toffs out to be killed for oil instead?

The first paper covering the story, with quotes from protesters

Messages on the poppy appeal adverts have been altered to display calls for our troops to be brought home and for former Prime Minister Tony Blair to be prosecuted.

These actions coincided with protests that occurred on Saturday, October 24, where thousands of people assembled in central London. Soldiers and their families joined other protesters who gathered in Hyde Park.

Polly Marsh from Chatham also went to the demo and said, "The Government still hasn't answered charges that it always has money for war but not for saving the planet, supporting public services, let alone saving jobs and homes.

His statement read: "When I went to Afghanistan I was proud to serve the Army and to serve my country, but before long I realised the government was using the Army for its own ends.

“It is distressing to disobey orders, but when Britain follows America in continuing to wage war against one of the world's poorest countries I feel I have no choice.

"Politicians have abused the trust of the Army and the soldiers who serve."

What people don't seem to realize is, that pulling out of Afganistan and Iraq now would cause a major, major disaster.
If we dropped our support for the weak regimes in those countries, how long do you think democracy would last there, before some power-hungry maniac took the reigns?

Death and destruction would swiftly follow, and who would the citizens of those countries blame? Us. The west.

Congratulations, a whole new generation of people who hate us, and would like to see us all dead. 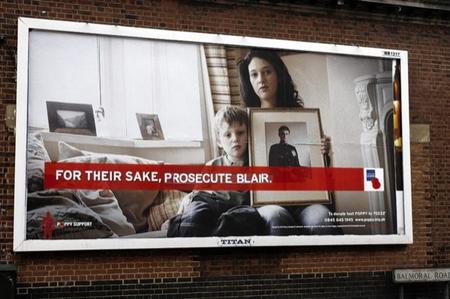 for their sake prosecute & get oil companies to comensate

The subvertising in no way dishonoured british troops, BBC radio Nottingham pro war biased broadcast using Pvte Damien Wrights mother representing all soldiers families with leading pro war questions & no anti war soldiers family members or organisations.
A Memorial she wants in North notts should be payed for by oil companies, not the royal british legion or family members& relatives along with compensation for family members or communities from the oil companies as well as widows pensions.
In fact thousands of British troops should be compensated by British companies on whose behalf most wars have been led since the end of WW2, as it is known as the best most combat experienced army, it has been employed by corrupt politicians as a corporate mercenary force.

Now both nations have been invaded again for resources with new pipelines going through Afghanistan & polarised to keep the oil flowing into the coffers of corporate oil CEOs only truelly International un democracy force for unbiased democracy with referndum & broad consensus can help Afghanis& Iraqis. The Obama regime is still stealing for the oil corporations.

With Afghans recent fraudulent,afghani Wifes have just been forced by a new law to starve or perform sex by Shia Law, officials who stood up fraudulent elections were sacked & the dishonest promoted on Obamas watch.
Malalia Joya afghani MP expelled for opposing the pro invasion drug lords & MPs & other good afghanis should be supported in working out a plan for democracy.
Iraqi oil & other workers should be supported in planning for democracy also & given access to the profits from work to do this.
A Captain of the welsh gaurds has spoken out recently against the wars as well as Pvte Glenton who went on the recent stop war march

Saying our troops have been sent to Afghanistan & Iraq stop terrorism here & increase democracy whilst supporting drug lords & ramming a pipeline through it to steal oil is like mass raping a school then saying its sex education. The oil corporations that made this happen & their cronies need to give everyone effected serious compensation & have the assets they have stolen taxed& be made to work minimum wage& if they think thats unfair they should be dropped into a stadium with soldiers & civilians families who have died.

International UN democratic peacekeeping force, not led by armies used like mercenaries working for oil corporations working together with Afghani people democractically if requested by referendum or a broad consensus. That said most Aghanis do not feel outside armed force is making things worse

Who exactly is this "we" and "our" you refer to?

By imputing your distorted views to millions who don't share them you demonstrate that, like politicians, you wouldn't recognise democracy if you found it in your soup.