The annual remembrance celebrations in Nottingham are traditionally associated with some manufactured controversy or another. This year was no different with the subvertising of a poster featuring Mansfield serviceman by anti-war campaigners.

In Nottingham, campaigners held a march from the city centre to the grounds of the castle where they laid a wreath in memory of the uncounted Afghanis who have died in the present conflict at a memorial to British soldiers killed in an abortive attack on Afghanistan in the 1870s.

The county council meanwhile, has taken time out from laying off staff long enough to rearrange the Spanish Civil War memorial so as to hide its political content. 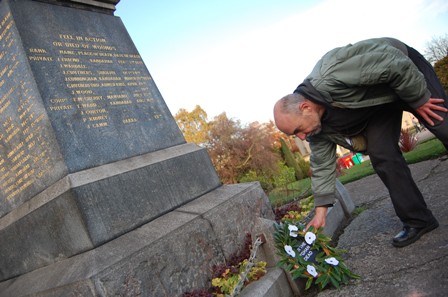 The Royal Legion billboard in support of poppy appeal billboards was subvertised by campaigners in Kent, who changed the slogan "For their sake, wear a poppy" to read "For their sake, prosecute Blair". The poster featured Hester Wright and her son Josh, six, holding a portrait of her late husband Private Damian Wright, 23, from Mansfield who was killed by a roadside bomb in Afghanistan in 2007. The media's response was predictably outraged, with Hester Wright among those expressing criticism.

The subvertising spread with reports of sightings in Norwich, Basingstoke, Bristol and London. Not long after, an open letter of apology was issued and reproduced in full or in part in the media. The Legion replied through the media saying it accepted the apology.

The Afghanistan occupation has now cost 229 British soldiers lives, and thousands more injured (not to mention the tens of thousands of Afghan civilians killed since the invasion began 8 years ago).