EDL: soldiers of the state?

The Observer today quotes someone on the Nottingham conflict who they describe as "a 43-year-old member of the EDL, a serving soldier who did not want to be named".
A serving soldier? Was he the only one? Was he there with the tacit support of his employers?
The EDL is a dream come true for the state, the kind of right-wing street presence it would want to exist, without the inconvenience of being accountable.
With Ian Tomlinson's death limiting the police use of violence (for the moment), does the EDL fill the gap nicely? Is that why the cops are so soft on them?
It's also funny how the EDL completely mirrors state opinion, unlike the BNP etc with their far-out extreme right policies.
Backing "our troops", backing Israel, not racist just "anti Islamic extremism" - all very conveniently "on message" for the authorities.

maybe a subset of the population just thinks what those people are thinking?
Wow.... imagine that. Different groups of people thinking different things. All without the state using mild control wireless technology - who would of thought it could of ever happened.

What I saw of it was that the EDL were EXACTLY like the BNP. Racism was clearly on show, before (comments on the train), during (reactions to banners supporting multi-culturalism, reactions to seeing non-whites in the streets) and after ("Going back to Blighty, Nottingham's a shit-hole full of pakis"). I'm convinced the EDL are the BNP - they just don't have enough parties to go to so had to make up a new name.
The EDL sweatshirts are a laugh : 'Leeds Division', 'Bradford Division' on them- like they had to make more than one of each. A sadder, uglier bunch of tossers I've yet to meet.

I think your wrong about them being BNP.I walked through them ,didnt even ask if I was muslim ,hindu or sikh.When I told them I had come to watch the soldiers march they nearly dragged me into a pub to by me a drink.Luckily I dont drink 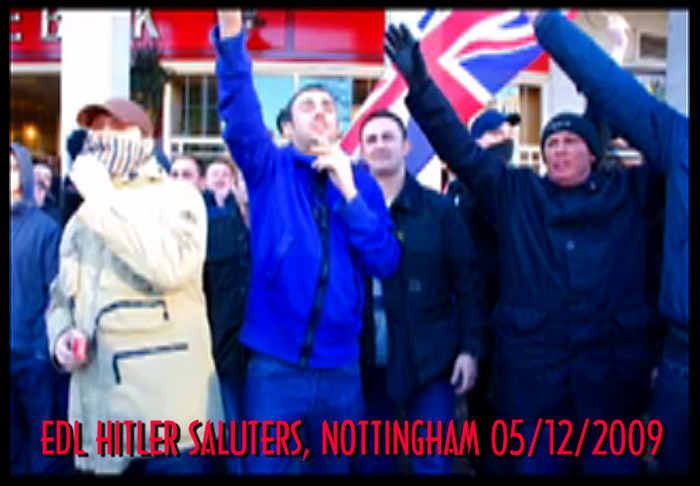 Reminds me of the work a certain renowned brainless wanky little Indymedia troll called Max who has appeared lately on indymedia. Max has pretended to be black, Asian, Jewish, and even space alien, just to poop the party......

Does anyone out there remember Max? It was presumed he was Mark Collett's aletr-ego.

They drag Asian people into dark alleys to beat them up, not buy them drinks.

Anyway, it gave me a laugh, lol

For a true indication of the spirit of the EDL neo-Nazis, enjoy the following picture of EDL bozos paying stiff-armed tribute to their beloved long-late Fuhrer.

The EDL are a right wing nationalist group who've tried to stir up racial and religious division in many cities, there are fascists involved with teh group but not all are racist. However this thing about the sieg heiling is utter crap. There may have been a few real sieg heils in Swnasea but most of the pictures are just of EDL members with arms up in the air sing in a stance that you'd pull when singing at a football ground. There's plenty of real criticisms of the EDL without having to resort to this nonsense.

Do the EDL serve the state agenda?

I would say that they may, as pointed out in the original post - they polarise opinion around "muslim extremism", which helps the state's intention to increase its repressive powers as protection against the "war on terror". (Incidentally, around the same number of people die each year in the UK from Carbon Monoxide poisoning as were killed in the 7/7 bombings in 2005 - perhaps the EDL should shift their campaign target to faulty gas heaters?)

I think the state have been cautious in their dealings with the EDL, as the state want to observe the success and growth of the EDL, and to see if it can be of use to them. This may explain why the police have been relatively accomodating to the EDL, parroting their lies about being non-racist and peaceable, for instance. The disorder caused by the EDL's drunken argy-bargy in Nottingham yesterday may force them to be less accomodating to the EDL.

.. the EDL clearly are doing the states dirty work and i suspect certain branches of the state have got their orr in there .. but the vast majority of EDL are ordinary people and you condemn them at your peril .. ordinary people in this country have been disenfranchised and disempowered and like most people look for scapegoats instead of dealing with who really runs this country .. the white anglo saxon rich .. and muslims fit the bill only too easily having blown up and killed 67 british people in 9/11 and 56 in 7/77 while UK soldiers continue to die in the wars in the east.

we have two choices .. an infantile one where we condemn those we do not agree with and shout and scream at them or try to work with engage with people and try to change their minds

this situation has arisen cause much fo the @ and socialist movement has nothing to do with ordinary people and in fact thinks they are all racists and backward and contents itself with its isolationist lifestyle punk and student scenes .... well this is those people coming back to haunt you

p.s. the idiot SWP and Respect by portraying the wars for resources that are the Iraq and Afghanistan wars, as wars on muslim lands ( and even as wars against muslims) must take some of the blame for this backlash

The EDL Are Mostly Football Hooligans Not Ordinary Law-Abiding People 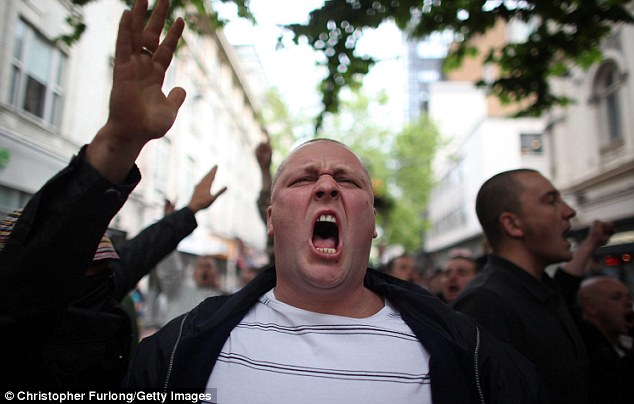 I'm sorry - racist football casuals ARE NOR ORDINARY PEOPLE. I was there in both Mancs and Notts and witnessed the EDL crowd. There was a small handful of young impressionable people there who may have been pressganged into attending with mates, but most if not all of the rest are hardcore football hooligans.

Many have banning orders and ASBOs, and some are BNP and NF members. There also seemed to be quite a few people chanting "fuck the IRA!".

You just couldn't make it up.

Therefore, the last (nazi troll) poster was talking shite about not treating the EDL with contempt.

The EDL look like brainless racist twats AND THEY ARE BRAINLESS TWATS.

They are a mixture of Football Factory and the National Front, and will no-doubt bring shame to England's world cup hopes, those who are not banned from travelling.

The next obvious step, after fighting in British cities, is for the EDL to fight in other countries while watching the England football team. If they try this on, in multiracial South Africa, England will be forever hanging its head in embarrasment.

> The next obvious step, after fighting in British cities, is for the EDL to fight in other countries while watching the England football team. If they try this on, in multiracial South Africa, England will be forever hanging its head in embarrasment.

I think the EDL or English fans in general will be least of worries in South Africa. The worst they could do would be a picnic compared with the daily mayhem of murders, rapes, armed robberies etc.

We're talking of a country where there are actually roadsigns warning of hijack blackspots where motorists are frequently held up at gunpoint (often shot and killed). 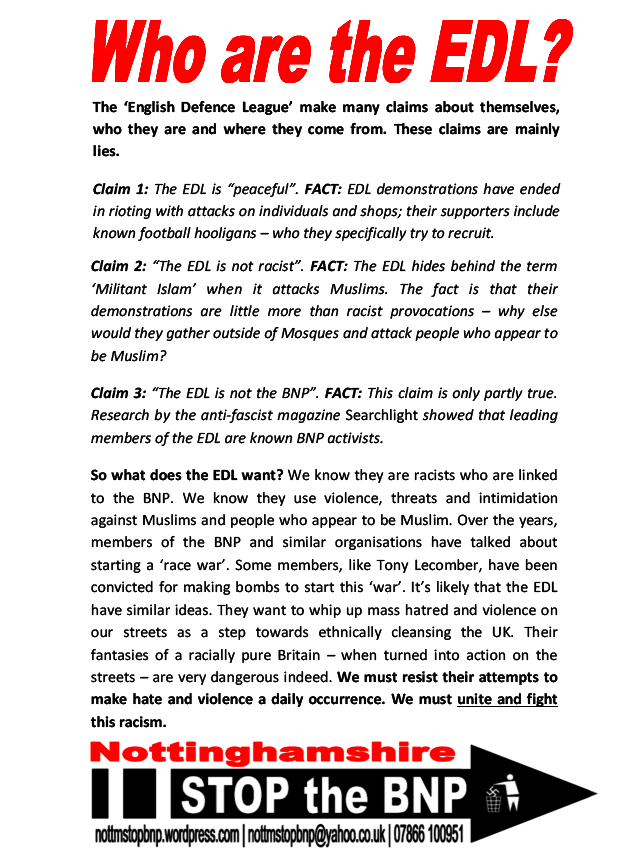 No matter what social class they come from, and though mainly white, rightwing and male, football hooligans come from across the income scale, including self-employed petty boujois businessmen and city stockbrokers, neo-Nazi football scum must be stopped, and if dangerous must be locked up for the safety of society.

You are pissing in the wind!