2009 was a busy year for Nottingham hunt saboteurs who were sabbing from September to December in collaboration with sabs from Sheffield and Leeds. They successfully sabotaged a number of hunts in the region including the South Notts, the Burton and Blankney hunts in Lincolnshire and the Meynall & South Staffs and High Peak hunts in Derbyshire. The saboteurs also held a successful fundraising event in Nottingham.

In spite of the legal ban on hunting with hounds coming into force in 2005, most hunts continue as they did before. The police, used to protecting hunts and repressing saboteurs, have changed little in their approach. Hunt saboteurs use direct action to save the lives of hunted animals. 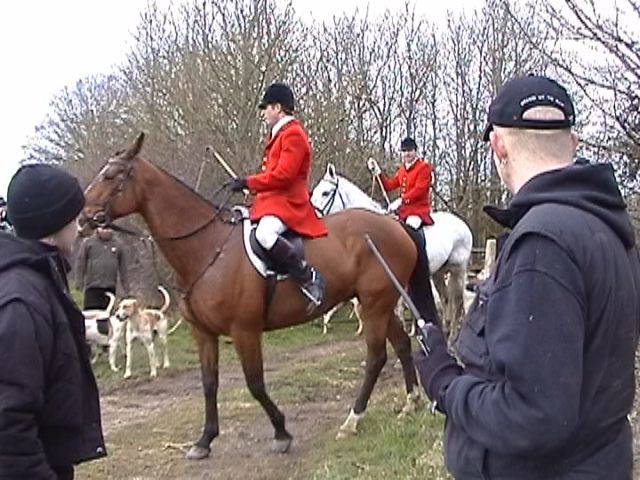 Nottingham, Sheffield & Leeds sabs started this seasons sabbing in September, when the hunts were training their young hounds to hunt by sending them after fox cubs. In the first few months of fox cub hunting, or“cubbing”, we sabbed the Burton, the Meynall & South Staffs, the South Notts and the High Peak hunts. As usual all were found to be quite blatantly flouting the Hunting Act and no longer even making a pretence of hunting within the law. Hardly surprising given how the police refuse to investigate illegal hunting – even when they attend hunts! The award for the most biased policing once again goes to the Lincolnshire force for turning up in large numbers when we sabbed the Burton. Watch out for us on “Cops On Camera” as they had someone filming for the show that day.

The South Notts hunt also decided to call the police, most likely as they haven’t seen sabs for 15 years or so. The police were delayed slightly as the bumpkin in charge of police relations couldn’t remember the number to call, and due to the incompetence of the call didn’t arrive for an hour and a half. Great news for us as the sun came up and burnt off the foxes’ scent. In disgust at the police’s incompetence, the hunt then galloped off and packed up – job done.

We also had several successful days sabbing the Badsworth and Bramham Moor hunt during cubbing. They probably didn’t expect us the first time as we popped up next to a wood they were hunting. They were onto a fox from the start, which eventually took shelter in a badger sett. This wasn’t quite safe enough as we then heard the sound of shovels, as the terrier men started digging out the fox. Luckily as we approached, the hunt members had a rethink and left the fox in peace. Shortly afterwards the hunt got onto another fox in a field of high crops and chased it into the same wood, and again we intervened, this time calling the hounds away and letting the fox escape. We returned to the hunt again a few weeks later and had a similar day, with the hunt immediately hunting foxes and us intervening to ensure a kill free day, saving two more hunted foxes.

We visited the Badsworth and Bramham Moor hunt again in October only to find the police pouring into the area at an alarming rate – with the intention of arresting sabs, for no particular reason. So we decided to head for the York & Ainsty hunt, who were hunting nearby. With some police following us all the way, we made a break for it down a footpath, heading towards the sound a huntsman’s horn. We found the tail end of the hunt leaving a large wood, were some men were staying behind to dig out and kill a fox that had hid in a badger sett. As we approached the terrier men stopped and walked back to their vehicle. So, another good day, and with no arrests.

We started the main season with an afternoon visit to the Rockwood harriers. Although this gave us a lie in after all our early morning cubbing exploits it was a difficult day as the hunt had spent a few hours in the pub and were well tanked up! Drunken driving and general aggression were the order of the day and this combined with the usual biased policing in the area made it difficult for sabs to get near the hunt.

The following week we paid a trip to the lesser spotted Colne Valley Beagles on the Yorkshire moors. It was hard going and we lost them for a time but sab perseverance paid off and we found them again and packed them up a few hours early.

Two weeks after our first visit there, twenty or so sabs returned to the Rockwood harriers, but the cowards smashed up one of our vans that two sabs were in and then the police held some sabs for around three hours and stopped us getting anywhere near the perpetrators. Complaints have been made to the police about the officers on the scene but we won't hold our breath!

Sick of Yorkshire police, the following week we headed to Derbyshire to check out the Meynall and South Staffs. Derbyshire police are keeping a low profile at the moment after recently paying out £38,000 after wrongfully arresting members of our group last year. The weather was atrocious and it was depressing at 2pm when we thought the hunt were packing up due to the driving rain to find that they were actually just changing horses! Despite this, and despite constant aggro from hunt bumpkins, we had a pretty good day. Staying with the hunt for long periods and constantly popping up where they least expected it.

We’ve made several visits to Lincolnshire to sab the traditionally fast and aggressive Blankney hunt this season. The last week of November saw us there, and what an excellent day we had. Sabs were in exactly the right place at the right time to take hounds off a fox that was only 10 feet in front of the lead hounds and would definitely have been killed if we weren't there. We stayed on the hunt all day and were always in the right place to sab them if necessary. At the end of December as the cold snap began we had another trip to the Blankney. They weren't out due to the hard frost so with a bit of luck and skill we managed to find the elusive Per Ardua beagles who took one look at sabs, boxed up and headed back to kennels.

We visited the South Notts again during the main season, on one of their rare Saturday meets and packed them up at 2 o’clock.

Sabs from the group also had successful mid-week trips to the Badsworth & Bramham Moor and to Cumbria to support the local sabs with one of their hunts.

We have also had two successful benefit gigs, one in Nottigham and one in Sheffield, raising a good chunk of money to keep our vans running. Thanks to all who helped with these. Thanks also to sabs from other regions who have come over to give us a hand on occasion.

Anyone who is interested in coming sabbing in future, from Sheffield, Nottingham, Leeds, or anywhere else in the North or Midlands should contact sheffieldsaboteurs@live.co.uk. We’d also like to hear from people who could help with fundraising, vehicle mechanics and looking after saboteurs’ animals (when needed).