National Front lose their flag and chased out of Ripley

Derby Midlands National Front called a 'day of action' in towns across Derbyshire today. Only five 'warriors' of the 'master race' bothered to turn up in Ripley, only to have their union jack and literature taken off them by antifascists. They were then chased out of town.
Hoping to create a bit of a stir, these fascist scum said they would be selling papers in Heanor, Ripley and Ilkeston. They didn't even bother showing up in Heanor and were then spotted in Ripley town centre. Antifascists marched up to the hapless fuckwits and, without any struggle, they gave up their flag and large stacks of racist literature. The tiny crew then had to leg it out of town followed by taunts and abuse. They made a brief trip to Ilkeston later on but had turned tail and run home before we caught up with them.

The National Front were hoping that this would be a great boost for them but instead it has been a dismal (and very funny) failure. These fascists will be resisted wherever they raise their ugly Aryan heads.

and a big thanks for this one

Can it get any worse?

The NF seem to be falling apart. Not only are they being run out of town by anti fascists but other nazis are scaring them off as well. No matter where they seem to go they get the piss taken out of them. lol

...that you wonder why they would even bother putting anyone forward for the general election.

Well done, more of this sort of thing!

Great stuff, well done! Local antifascist groups round the country need to be vigilant and chase fash out of town like this whereever they pop up.

Why not contact Derby NF, the sad organisers of the failed "demo", and gloat? The NF website gives their details as

What a bunch of idiots!

any pics of the flag?

Fair play to you for chasing the racists out, I live in the area and spend a lot of time in the town centre, I'll be watching out for the twats, if they try to come back they'll wish they hadn't.

What a sorry bunch 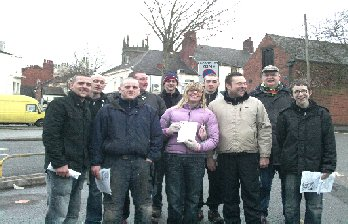 Here's some photos of the aryan arseholes in question, so we know who to look out for next time...