On Monday and Tuesday, members of the Public and Commercial Services Union (PCS) will be striking against cuts to the redundancy terms for civil and public servants. 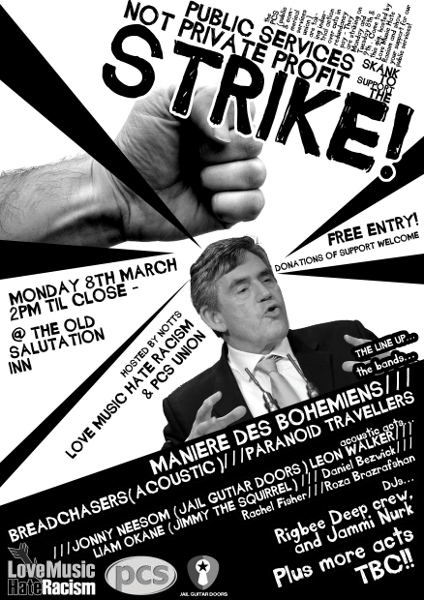 Strikers in Nottingham will hold a protest on Monday March 8, assembling at Castle Meadow at 11.30am and marching to International Community Centre for rally starting at 12 noon. The rally will be addressed by Paul Williams from the PCS and Alan Simpson MP (Lab, Nottingham South).

The cuts faced by PCS members fit into a wider attack on public sector workers which has seen lower than inflation pay rises and job cuts. In the aftermath of the economic crisis brought about by bankers, it is the public sector which is having to take the hit.

A more extreme version of the same situation is currently playing out in Greece with "austerity measures" being opposed by general strikes, massive protests and riots. It is unfortunate that in the UK, a 2 day strike is - by some way - the most radical response to cuts from any of the unions.

Resigning from a job

The strike by members of the Public and Commercial Services Union (PCS) is a fight against potential future job losses. So resigning from our jobs in protest would be madness as we would be doing exactly what our employer wants us to do.

If the Government goes ahead with its plans to cut the Civil Service Compensation Scheme, it will amount to roughly a 30% cut in redundancy payments for thousands of workers. This will potentially pave the way for thousands of job losses, as it will be cheaper to make workers redundant. In addition cutting redundancy payments of staff in the Civil Service will make it more attractive to private firms who want to take over public services at cut price.

Our strike has an impact in British society, which would not be achieved if we resigned from our jobs. We deliver services that affect people's day to day lives. This includes issuing welfare payments, collecting taxes that pay for the NHS and education. We are the people who issue driving licences and are the people who work in the Health & Safety Executive, an organisation that protects people at work. And there are many other government departments that serve the public, besides the ones I have mentioned.