The six activists who blockaded the Nottingham-based arms company Heckler & Koch appeared at Nottingham Magistrate’s Court on March 17th and 18th on charges of aggravated trespass. 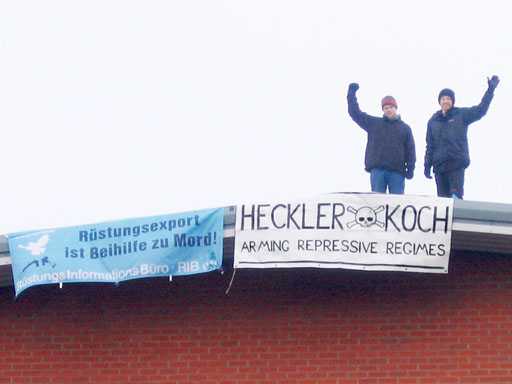 Five pleaded guilty and were ordered to pay between £40 and £195 each in costs and fines. The two with prior convictions were also served with 12-month restraining orders preventing them from entering Easter Park, the industrial park in which Heckler & Koch’s warehouse is situated.

The sixth activist pleaded not guilty. His trial will take place at Nottingham Magistrates’ Court on Thursday May 20th at 09:45. The arms company’s Managing Director will be called as a witness. A bail condition preventing the activists from associating with each other has been lifted.

Heckler & Koch is one of the world’s leading brands of small arms including assault rifles, submachine guns, pistols and grenade launchers. The company’s UK division consists of an international sales office and distribution depot in an unmarked warehouse on Nottingham’s Lenton Lane industrial estate.

The company has been the target of demonstrations since 2007 due to the unethical nature of its business. Heckler & Koch weapons continue to be supplied to armed forces that are known to commit human rights violations. It is because of this that the six activists decided to take direct action.

In the early morning of February 18th, four of the activists locked themselves to the gates using D-locks and home-made arm-tubes, while the other two climbed onto the roof and unfurled banners accusing the company of "arming repressive regimes". This direct action effectively shut the company down for the day.

The Shut Down H&K campaign is calling for people to gather outside Nottingham Magistrates’ Court from 09:00 on the morning of the trial to support the defendant and to help raise public awareness of this ongoing anti-arms-trade campaign.