The Leicester Mercury has revealed that BNP candidate for North West Leicestershire, Ian Meller, was a member of the NF until 2000. He has a conviction for carrying an offensive weapon related to an incident where he wielded a roofing lath at gay rights march in Leicester. 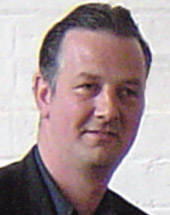 Meller is quoted as saying that he left the Front because "I could see street demonstrations wouldn't get us anywhere." He presumably thinks that being elected as a BNP MP would help him achieve his violent anti-gay and anti-immigrant aims.

Interestingly, a commenter claims to have been part of the organising group of the gay rights march that Meller wanted to attack. He said that the organisers received death threats from Meller's party.

Under the suits the same twisted fascists are there, trying to get your votes.

Michael Shore is BNP candidate for Broxtowe, and he is also ex-NF, standing in elections as a National Front candidate 9 years ago. It's no surprise that fascists move between groups, they tend to be opportunists.