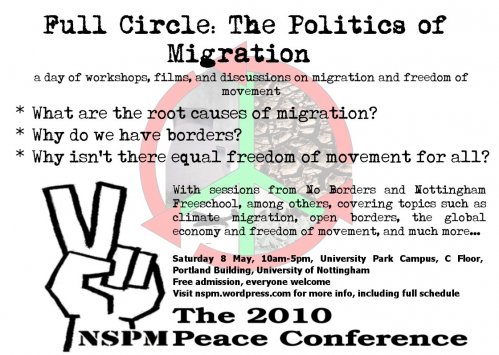 Full Circle: The Politics of Migration

The border regimes and immigration controls of the UK and Europe cause untold suffering for many thousands of people. Those who choose or are forced to migrate from poverty, war, and environmental destruction are often met with violence, oppression, and discrimination. Many of the root causes of migration into Europe can be traced back to countries in the West, from conflicts fuelled by the arms trade, military invasions of countries such as Iraq and Afghanistan as wall as support for oppressive regimes and human rights abusers, and the devastating effects of climate change caused by the rampant pollution of industrialised countries. This creates a ‘Full Circle’ of oppression and violence, and leaves many thousands of people desperate and hopeless, trapped in a vicious circle of suffering and poverty.

This day of workshops, films, and discussions has been organised to explore these issues in more detail. It will include sessions on the topics of climate migration, the ongoing situation in Calais and the oppression of migrants trying to cross the border into the UK, the workings of the European border regime and how migration is affected by developments in the global economy.

A popular education workshop exploring how different political issues, campaigns, and struggles are connected, and how the common ground they share can be used as a base from which to move beyond single-issue campaigning.

This workshop will provide space to explore more specifically the reasons why women may migrate, and the problems that women can face when trying to navigate throught the asylum process. We will also look at how, in order to build strong and effective movements against systems of oppression, hierarchies and domination need to be challenged within activism and the ways we organise.

No Borders is a network of groups across Europe who campaign and struggle against oppressive border regimes. This workshop will explore the political position of No Borders, addressing the question of why we have borders as well as the role of the state and capitalism in curtailing freedom of movement.

1pm LUNCH (unfortunately we are unable to provide food, so please bring a packed lunch)

Capital knows no borders – governments may claim to control the movement of people, but the increasingly globalised economic system has its own logic. What do current shifts in economic power mean for the future of migration, borders, nations and conflict?

After a long and difficult journey across Europe, Calais is where many migrants attempt to cross the border into the UK. Living in squats and makeshift camps, and facing constant police harassment, the migrants in Calais are subject daily to the brute oppression and violence of the joint UK – France border regime. This session will include a film documenting the situation in Calais followed by a short discussion.

Fascism is underpinned by the desire to defend a perceived national race from outsiders and therefore poses a significant threat to those who want to see freedom of movement for all. This workshop will explore some of the history of fascism and the different forms anti-fascist resistance has taken, as well as developing consciousness of the underlying assumptions of fascist politics.

Hicham Yezza, editor of Ceasefire Magazine, was arrested under the terrorism act at his Nottingham University office in May 2008. He was cleared of those charges after six days but was immediately thrown into an immigration detention centre to be deported within days. He spent six months in total between immigration detention centres and Foreign-National prisons until he won his case against the Home Office in August 2009. This workshop aims to both share what he has discovered in his two years fighting Home Office oppression in al its forms and also to encourage participants to think about how to challenge the government’s inhumane immigration policies and tactics.