The Spanish Civil War memorial at County Hall is to be "re-dedicated" at an event organised by Nottinghamshire, Mansfield and Nottingham Trades Union Council. 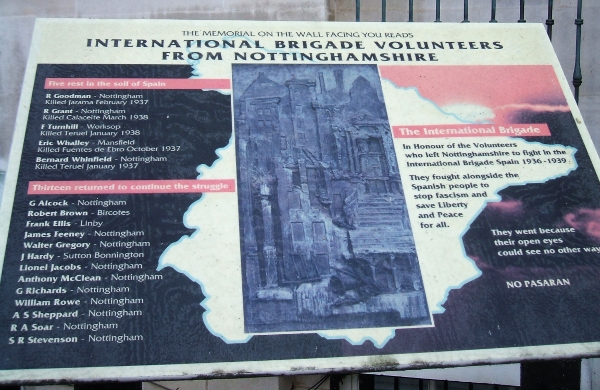 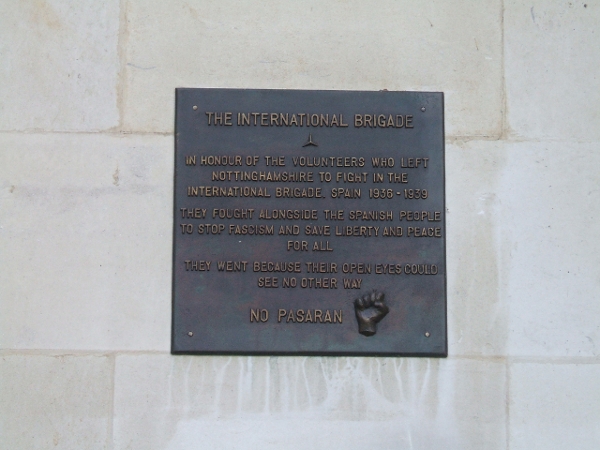 When the Tories took Nottinghamshire County Council after local election's last year, one of the first decisions new leader Kay Cutts made was to re-arrange the Spanish Civil War memorial.

Unveiled by the Spanish ambassador in 1993, the memorial remembers those who went from Nottinghamshire to fight against General Franco in the Spanish Civil War.

Cutts' alterations (seemingly carried out without reference to anybody else at the authority) saw wall-mounted plaques rearranged so that they were harder to read.

An explanatory plaque was removed and replaced with a swish, but generic panel remembering "the men and women of this county who have sacrificed their lives for others and for freedom."

Inevitably this was controversial, with the Trades Council and other protesting at the move.

The re-dedication is an opportunity to remember those who went to Spain to fight fascism and also to counter the blatant attempts to bury the memorial's still radical political content.

The event will be held at County Hall, West Bridgford, Nottingham, Saturday July 17, from 10.30am - 12 noon. There will be speakers from the Trades Council, International Brigades Memorial Trust, Labour Party, LibDems and the Spanish Embassy have been invited.

Entertainment will be provided by Nottingham Clarion Choir.

Following this, the city council will be hosting a display organised by the International Brigades Memorial Trust which is touring the country.

The exhibition called "Antifascista!" is about British and Irish volunteers in the civil war and will be on display in the Council House, Market Square from 12 noon Tuesday July 20 - Saturday 31 July.

This is great. Looking forward to it :)

I am so pleased this is being arranged. I was angry as hell that Cutts could be so disrespectful to the brave working class people who were prepared to risk their lives while mendacious politicians let the brutal fascists run amok. Cutts, you and your colleages are shameful hypocrites.

I will be there on the 17th and hope all who oppose fascism are there also.