On Thursday 20th May, an anti-arms-trade activist will stand trial at Nottingham Magistrates' Court. Kirk Jackson is pleading not guilty to a charge of aggravated trespass for his part in a protest that closed the international sales office of arms company Heckler & Koch for a day. 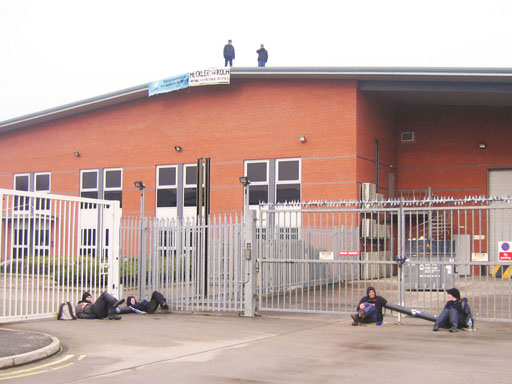 On 18th Feburary, Jackson and another local activist climbed onto the roof of Heckler & Koch’s unmarked warehouse in the Lenton Lane industrial estate and unfurled banners accusing the company of "arming repressive regimes".

Meanwhile, four other activists locked their necks to the security gates using D-locks and home-made arm-tubes. This action effectively shut the company down for the day, preventing it from carrying out any arms deals.

Supporters of the Shut Down H&K campaign – now in its third year – will be gathering outside the court on Wilford Street at 09:00 on Thursday with banners and placards. If you can make it, come along to show your support.