Come along and sample quality ales and beer, with a clear conscience, at the first ever Sumac vegan beer festival.
If you prefer your beer without fish in it then read on! Were you aware that many beers and other forms of alcohol, including real ale, can be made using isinglass finings, the swim bladders of fish, amongst other animal derivatives?

Finings are widely used to speed up the settling of sediment, a process that can work perfectly well with the addition of just a little more time!

We at Nottingham Vegan Society want to show that vegan ale is just as tasty as it's fish containing counterpart but better for you and the natural environment.

Members and guests only on Friday evening then open to all on Saturday and Sunday from midday until late.

Directions to the Sumac Centre:

why hasnt this been tackled before? i for one am really glad this has been brought to the fore so i can drink to my hearts content! great!

been raised many times in my experience although for some reason people usually only pay attention in relation to its use in wine. 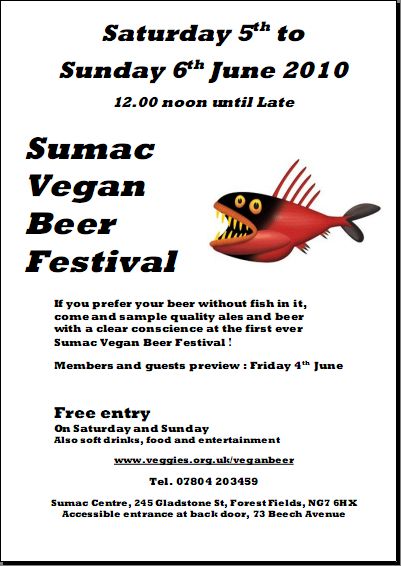 # The dozen or more beers will include:
- Marble Brewery, from Manchester, who make cask ale from only organic and vegan ingredients
- Stringers, the 100% renewably powered brewery from Cumbria, who list 4 out of 9 beers as vegan
- Magpie, who occasionally produce some vegan ales
Vegan bottled beers may be available from Pitfield Organic, Fallen Angel and Cropton Breweries.

# Musicians, poets, djs, juglers, rappers and other entertainers are welcome, in the garden during the day (if fine) and in the club room during the evening. You are welcome to bring your favorite vinyl for the open-decks disco. You help promoting the event would be welcomed.
Print and display posters/fliers from

# There will also be organic, vegan cider, lager, wine and spirits, plus organic ginger beer, lemonade and cola, and other soft drinks, as well as fair trade, organic teas and coffee.

# We hope to have Something Fishy vegan fish and chip catering trailer attending, as well as Veggies Catering Campaign, and perhaps Screaming Carrot might bake some Vegan Ale & Mushroom Pies!

Full details can be found at

i wouldnt have known that in a million years, based on the number of pubs ive been into who's bar staff dont even know what the word vegan means, let alone which of their real ales ( or any alcohol for that matter!) is vegan. i found that shocking to be honest, because with the crap they use to process the cask ale its not even vegetarian!
why hasnt anyone done anything positive like this before to
stop the rot!
firefly