We Share the Same Sky by Banner Theatre 10.06.10 at The Pakistan Centre

Banner’s new show, We Share the Same Sky, is now on tour.

The show is based on the real-life stories and experiences of migrant workers, refugees and others who have come to the UK from other countries. 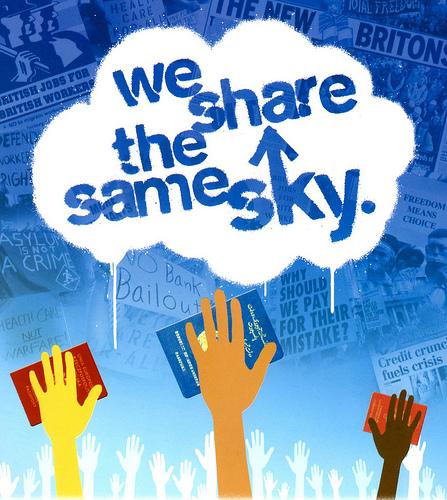 The project has been developed in South Yorkshire, with support from the Academy for Community Leadership based at Northern College near Barnsley, where the company worked with Afghani refugees, asylum seekers and campaigners, and in the Handsworth district of Birmingham, with support from Urban Living, where we worked with African-Caribbean and Asian communities and Polish migrant workers.

These two units are being augmented with other material about developments in Latin America and, in particular, in Venezuela, where the reforming government of Hugo Chavez, with enormous popular working-class support, is using oil revenues for the benefit of the poor and dispossessed.

We Share the Same Sky has been supported by the Academy for Community Leadership, Arts Council England, the Barry Amiel and Norman Melburn Trust, Birmingham City Council, the Sir Barry Jackson Trust, the Unity Theatre Trust and Urban Living.