Willmott Dixon in Colehill gets noisy demo with activists on the roof!

Midlands Activists arrived today at the Coleshill, Birmingham branch of Wilmott Dixon to protest against them because of their contract of building a new animal testing laboratory at Leicester University. 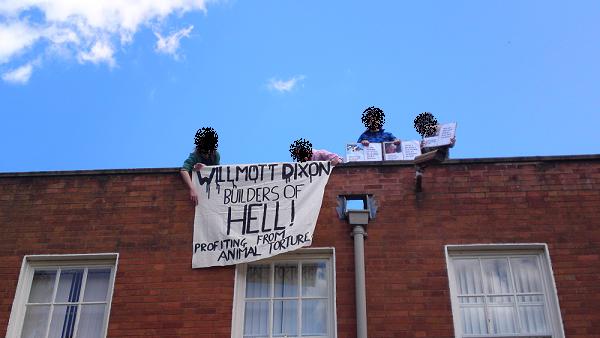 Upon arrival activists ran onto the site, starting off with a gesture of disrespect for the company's disrespect of animals, by taking down their flag.

We then approached the building, with staff rushing and scurrying to quickly lock the doors and close the blinds, they knew exactly why we were there. Activists surrounded the building and Willmott were met with a barrage of noise and a display of placards for their cowardly peering faces. We informed them that vivisection is both unethical and unscientific and gave them plenty of explanation to show why. With placards showing examples of the tortured animals that vivisectors are responsible for, and a clear reading message "WILMOTT DIXON: ANIMAL KILLERS"

We then took to the roof and unveiled a large banner on the top of their building, which reads "WILLMOTT DIXON - BUILDERS OF HELL! - PROFITING FROM ANIMAL TORTURE!".

To turn up the heat on the company even more, we proceeded to turn off their air conditioning fans which were conveniently placed on the roof as well.

Also present were their glass panels which offered another entrance for our loud, angry and determined voices to boom down upon them.

Members of the site were stood in shock and could be seen staring up at the banner, whilst others took leaflets.


We then took the protest outside of the site, which gave us an opportunity to leaflet the local public and make them aware of Willmott Dixon's blood money dealings. This was received with much support and residents of Coleshill encouraged us to continue to keep up the pressure on the company.

Animal experimentation maims and kills billions of animals every year, it is scientifically fraudulent and has already been proven to be unreliable and unsafe, and there are many examples to show where this useless practice has gone on to maim and kill humans.

Wilmott Dixon can expect to receive plenty more attention from activists, and Leicester University is surely in for a dedicated campaign to put a stop to their concentration camps for animals.

Your protest sounds like the best of the day of action. Nice one

It's really refreshing to see some proper actions kicking off; bet the industry are shitting a brick.