Emergency demo against Israeli piracy on the high seas 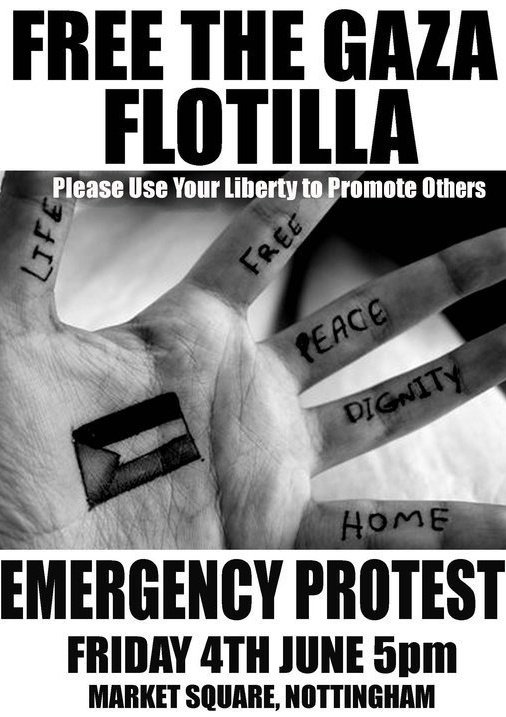 I think i have managed to attach a flyer and poster?

further info emailed to me earlier

Friday 4th June 5pm Market Square Nottingham City Centre
On Monday 31st of May in the early hours of the morning a ship carrying humanitarian aid was attacked by Israeli Defence Forces, in cold blood 10 pro-Palestinian activists were killed and 10s more injured.  All those aboard the ship were civilians, unarmed and merely tried to defend themselves with what they had lying around the boat in the face of live ammunition.
The boat had been in international waters and had the intention of bring much needed aid to the Gaza strip, one of the most densely populated places on earth where 1.5 million people are being blockaded.  ISRAEL HAD NO RIGHT TO BOARD THE SHIP!!!!
The situation in the Gaza strip is terrible following a 3 year blockade and the actions of the IDF in operation cast lead where 1,400 people were murdered, including 400 children and where most of Gaza’s infrastructure was destroyed and 100,000s left homeless.  The flotilla was bringing in much needed aid, denied to the Gazan people by Israel, and these men and women aboard the 700 strong flotilla should be commended as heroes not killed in cold blood.
Amongst the 700 people on board was a student from Nottingham Trent University, Tauqir Sharif, or as he known to all of us Tox, we have yet to hear from him, and the Israel government is refusing to give out any information on the dead or injured.  We are all very worried about him!
We DEMAND the release of all the names of those who have been killed or injured.
and
We DEMAND the immediate release of all those who have now been detained by the Israeli Defence Force.
We DEMAND that the flotilla be allowed to take its aid to Gaza.
We DEMAND the immediate opening of all crossings into Gaza and an end to the blockade!
We DEMAND that British government takes serious action and expels the Israeli Ambassador from the UK and re-calls the British Ambassador from Israel.
We DEMAND an immediate arms embargo on Israel and full government backing to the BOYCOTT DIVESMENT AND SANCTIONS movement.

ISRAEL HAS ONCE AGAIN GONE TOO FAR SO, WE CANNOT SIT BACK AND ALLOW THEM TO KEEP COMMITING THESE ATROCITIES SO PLEASE COME AND JOIN US AT 5PM FRIDAY 4TH JUNE MARKET SQUARE NOTTINGHAM CITY CENTRE AND HAVE YOUR VOICES HEARD
We understand that many students may still have exams or may have just finished them but all that is needed is an hour of your time to really make a difference!
Please pass this email on to all you think may be interested, to student societies please send this on your mailing lists, to community leaders onto your community.
TAUQIR NEEDS YOU, ALL THE ACTIVISTS NEED YOU, AND MOST IMPORTANTLY PALESTINE NEEDS YOU.

Your farmer supports Israel. Get used to it !

You can demand all you like but you won't get, because you are farm animals, herded and milked for tax.
Anyone remember the marches against the Iraq invasion.
It made some people feel a bit better about how their tax was being spent, but it didn't stop "our hero boys" going on a genocide rampage.

This is solidarity - get used to it

Dear anarchist
of course politicians will not respond to the demands in this call out. Politicians are the cause of the problems, not the source of solutions.

As an anarchist myself I have no time for Israel or Hammas or any other politicains who use the comman man as their pawn and cannon fodder.

But never be in any doubt just how a show of solidariry helps the people of Palestine. I have spoken directly to people suffering and trying to fight for justice who have told me that such things as solidarity demos and actions by people in other places mean so much to them and give them huge strength even in their darkest days.