On Friday June 4, activists in Nottingham held a protest against the lethal Israeli assault on the Gaza flotilla.

Chanting in front of the Council House - video/mp4 2.7M 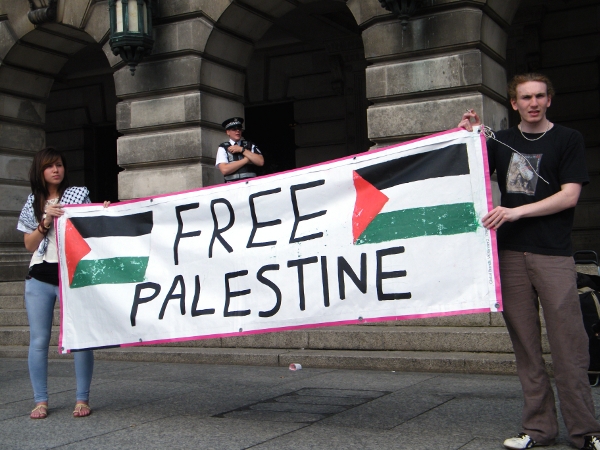 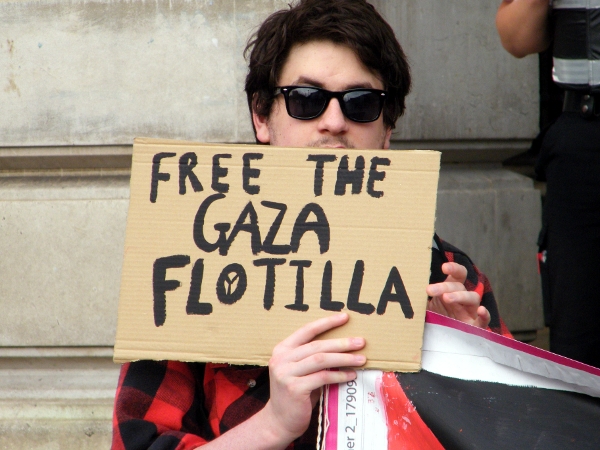 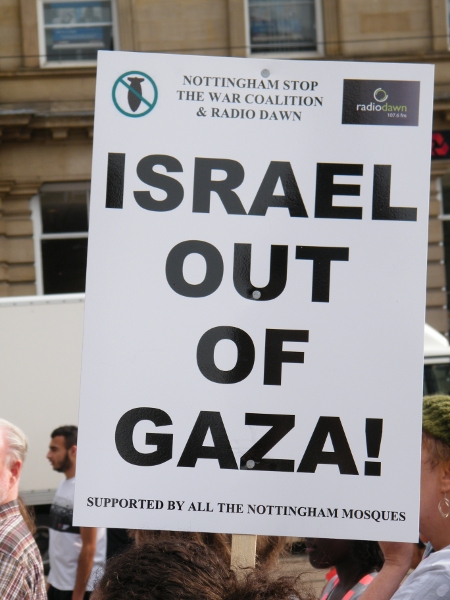 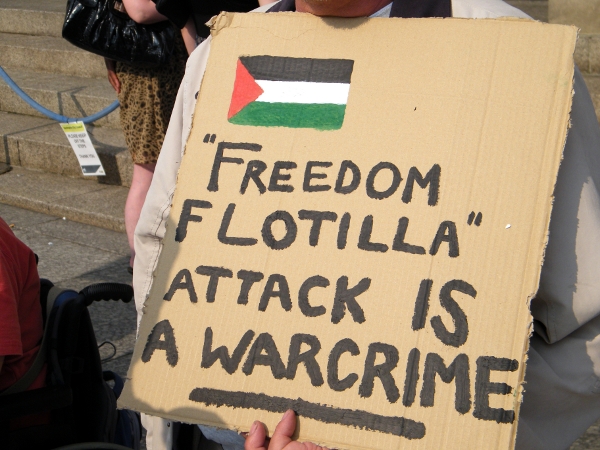 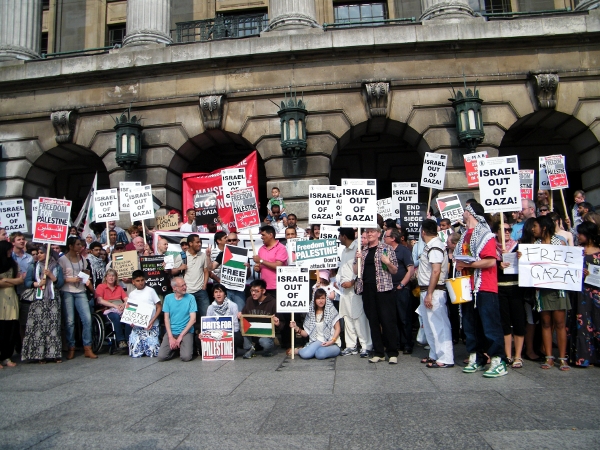 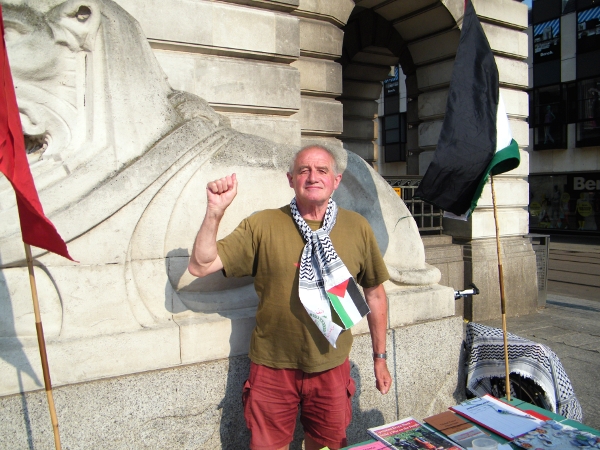 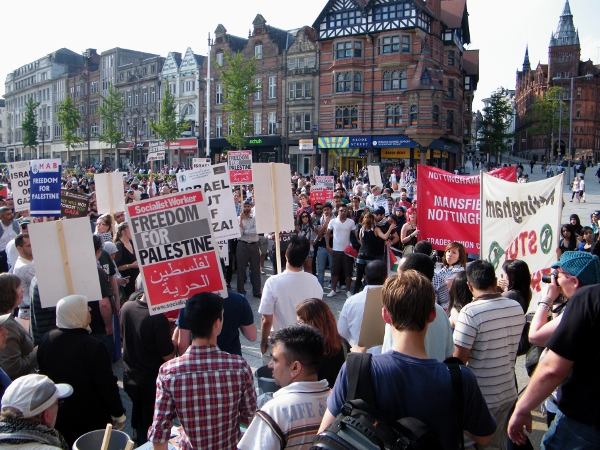 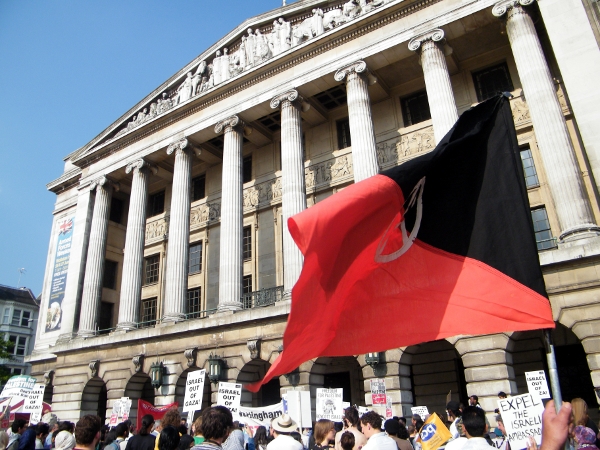 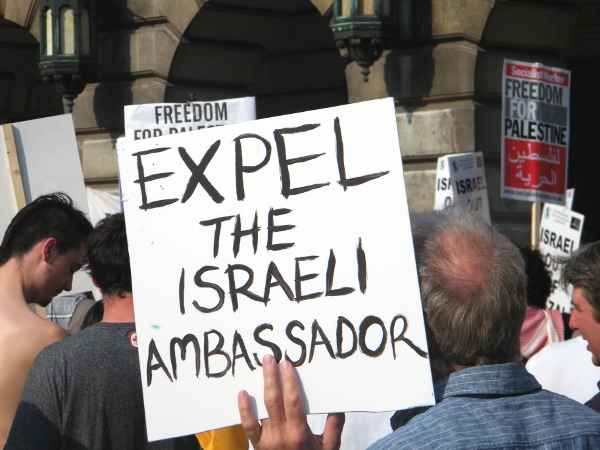 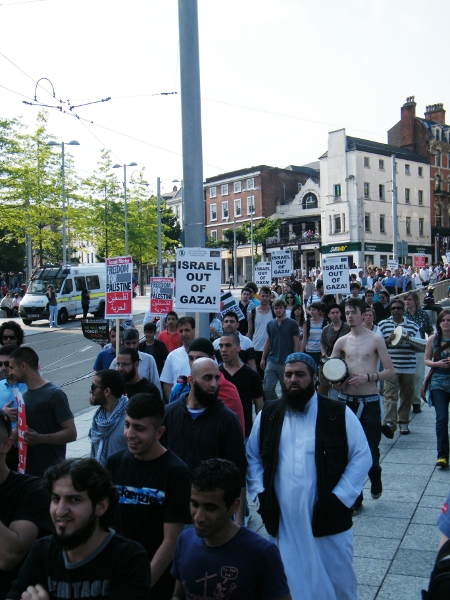 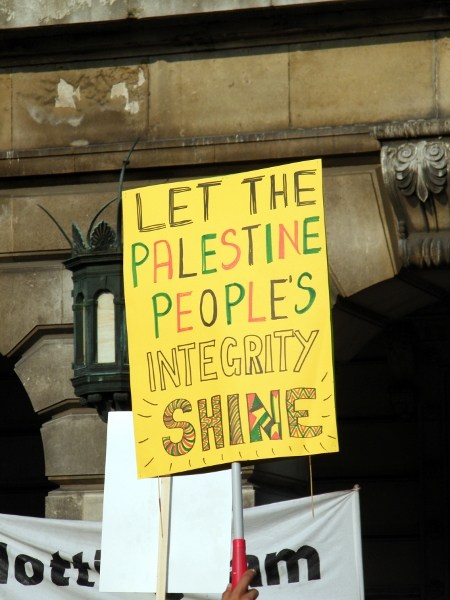 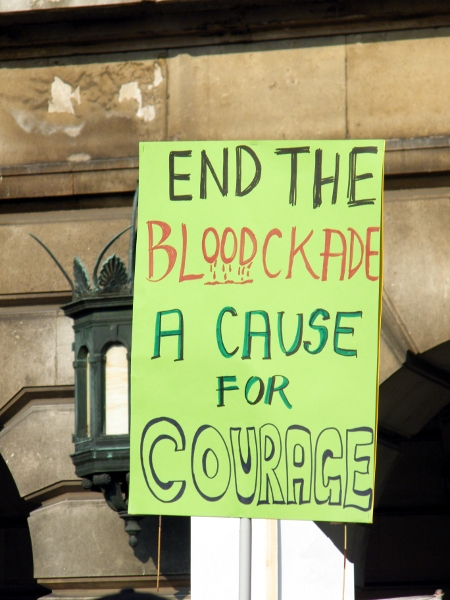 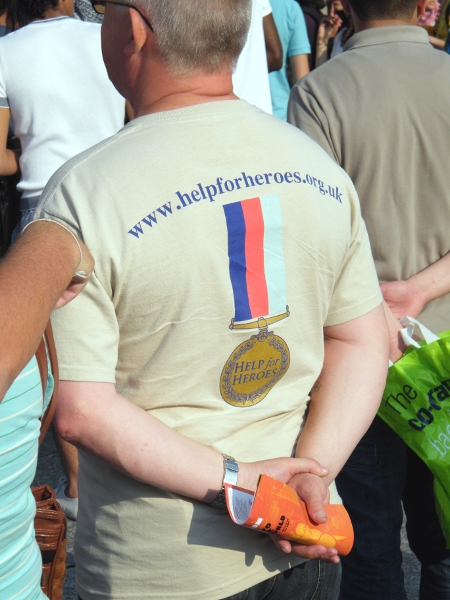 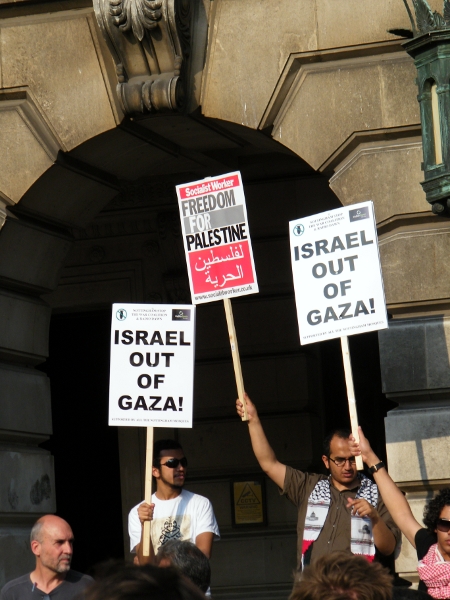 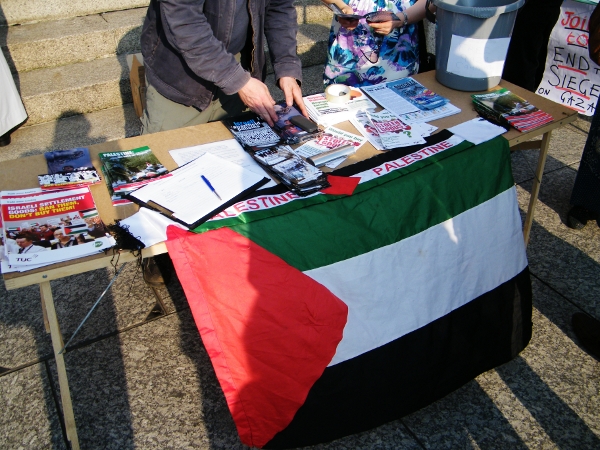 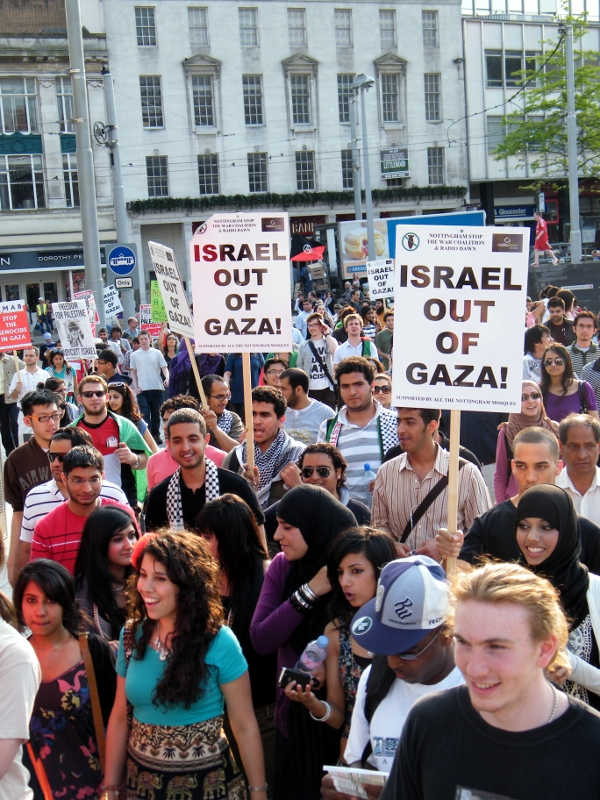 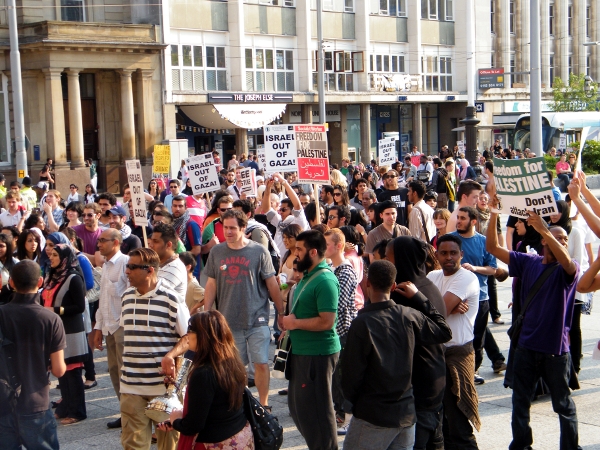 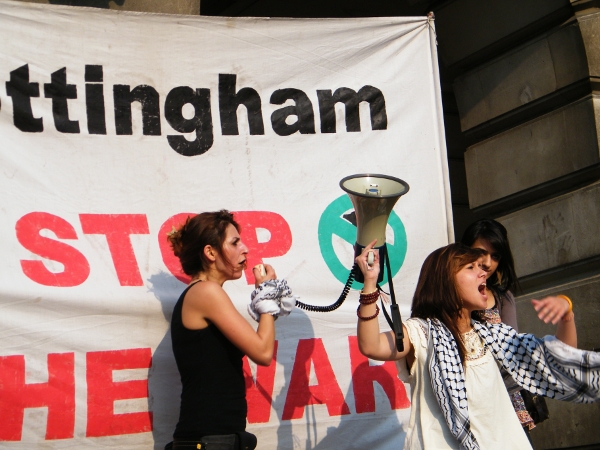 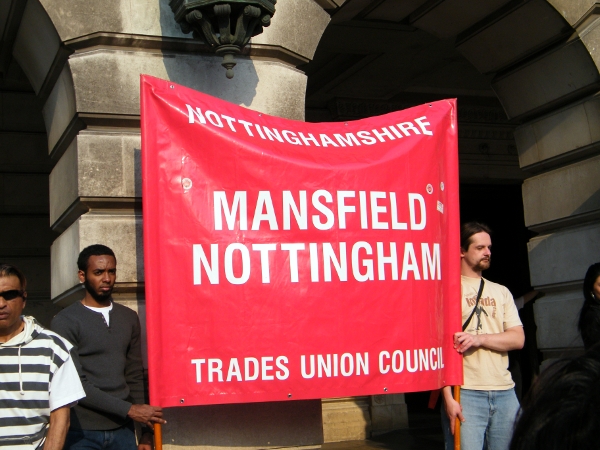 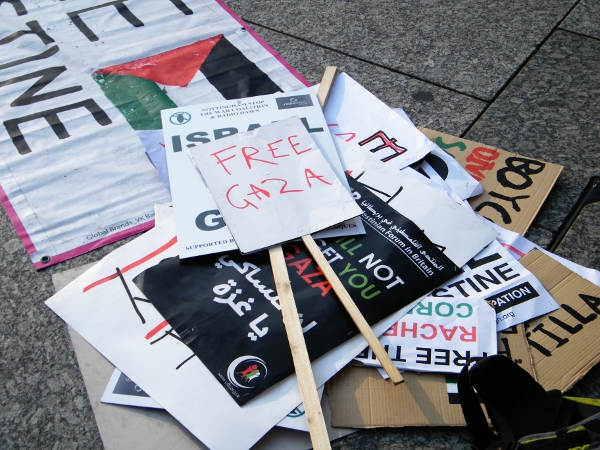 The demo had been called in the Market Square from 5pm and people were already assembling by that point. Several hundred people would ultimately turn up.

Early on a photographer, presumably from the Post, tried to coordinate a photo opportunity with people on the steps of the Council House. This is strictly prohibited by council jobsworths and a lone security guard tried vainly to move activists off.

There were speeches by various people, although I heard few of them, and lots of chanting.

At one point it looked like things might be getting more excited as protesters marched off, but after one lap around the square we returned to the Council House.

At this point the police officers standing around keeping an eye on people were joined by Inspector Andy Townsend who didn't look particularly concerned by the turn of events.

A second march later on was similarly brief, although this time we did start along Long Row.

Although people were noticeably flagging the demo continued for getting on for two hours in the not inconsiderable heat.

With no obvious manifestations of the Israeli state in Nottingham (although campaigners have suggested protesting outside Heckler & Koch's offices) this was largely an excuse for people to express their anger against Israel's actions both against the flotilla and on a daily basis in Gaza. And people's anger was very clear.

Campaigners stated their intention to hold a further protest one hours after the likely attack on the MV Rachel Corrie. This may even be going on as I write.

Congratulations to Nottingham Palestine Solidarity Campaign (PSC) and the Palestinian students from Nottingham University (prominent in the photos and videos) for calling this protest.

To get several hundred in the Market Square with only a few days notice is a real success.

From this Nottingham protest we got enough support to run a coach to London the next day for the National End the Gaza Blockade Protest, which went from Downing Street to the Israeli Embassy.

It was big, noisy and angry and, I imagine by now, there will be a report of it on the Stop the War website: www.stopwar.org.uk