The Human Rights Law Centre at the University of Nottingham is proud announce to the 3rd Annual Human Rights Film Festival on “Human Rights in the UK”, which will be shown at Broadway Cinema, Nottingham in July. The Festival seeks to highlight domestic human rights issues – from homelessness to counter-terrorism policies. Have you ever wondered how you could be impacted by the saturation of CCTV or been concerned about the decreasing professional integrity of the UK media? Human rights permeate the foundations of UK society and this festival aims to highlight these and other issues in the UK. 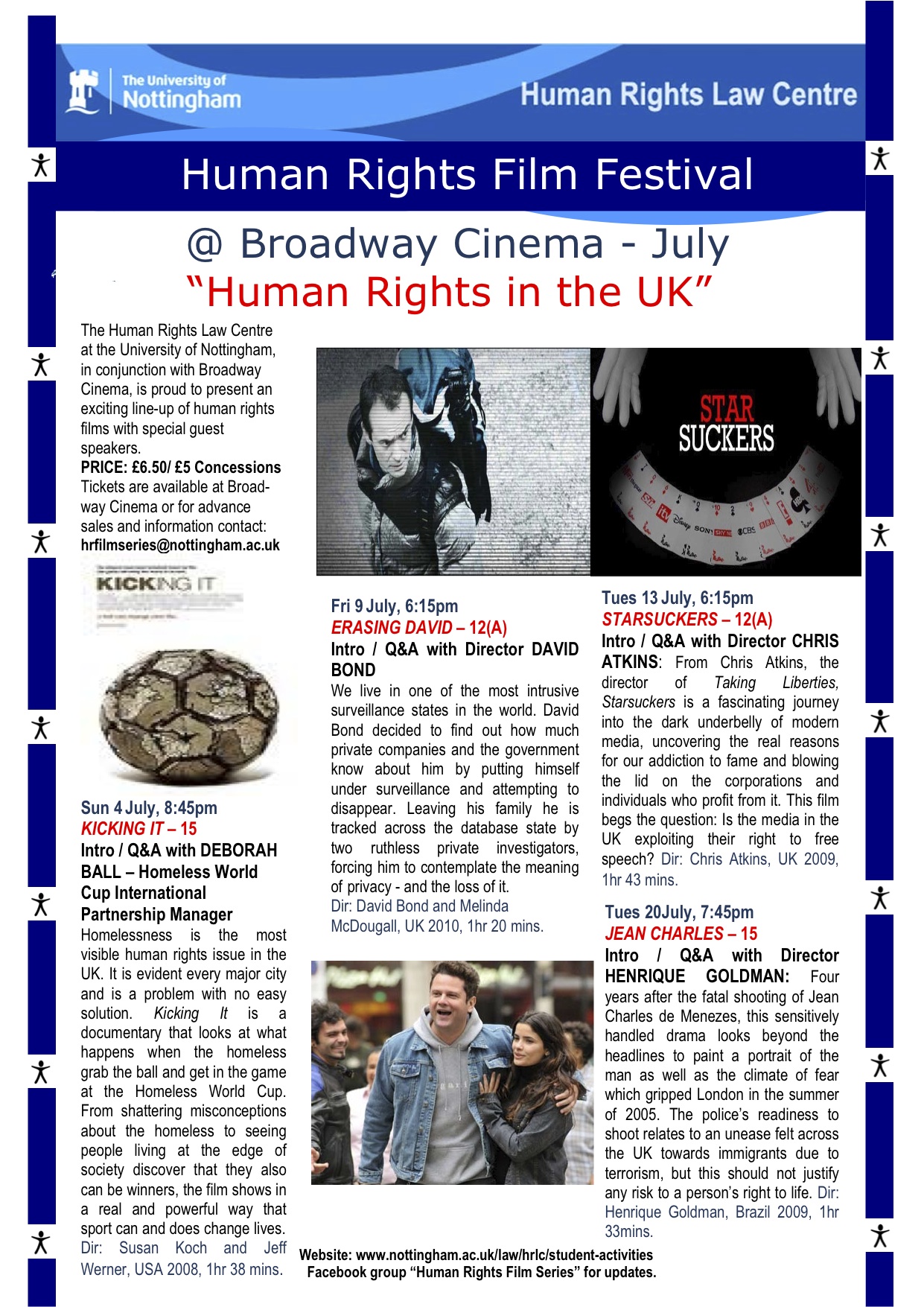 "HUMAN RIGHTS IN THE UK"

Intro & Q&A with Deborah Ball, International Partnership Manager, Homeless World Cup
Homelessness is the most visible human rights issue in the UK. It is evident in every major city and is a problem with no easy solution. 'Kicking It' is a documentary that looks at what happens when the homeless grab the ball and get in the game at the Homeless World Cup. From shattering misconceptions about the homeless to seeing people living at the edge of society discover that they also can be winners, the film shows in a real and powerful way that sport can and does change lives.

We live in one of the most intrusive surveillance states in the world. David Bond decided to find out how much private companies and the government know about him by putting himself under surveillance and attempting to disappear. Leaving his family he is tracked across the database state by two ruthless private investigators, forcing him to contemplate the meaning of privacy - and the loss of it.

From Chris Atkins, the director of Taking Liberties, Starsuckers is a fascinating journey into the dark underbelly of modern media, uncovering the real reasons for our addiction to fame and blowing the lid on the corporations and individuals who profit from it. This film begs the question: is the media in the UK exploiting their right to free speech?

Intro & Q&A with Director Henrique Goldman
Four years after the fatal shooting of Jean Charles de Menezes, this sensitively handled drama looks beyond the headlines to paint a portrait of the man as well as the climate of fear which gripped London in the summer of 2005. The police's readiness to shoot relates to an unease felt across the UK towards immigrants due to terrorism, but this
should not justify any risk to a person's right to life.

Ideas about where Human Rights lawyers might focus their efforts

This looks like an interesting selection of films. But I wonder whether, rather than concentrating their efforts on producing a smorgasbord of titillating films for middle class chin strokers at the Broadway the human rights lawyers might focus on their own institution.

Nottingham University famously brushed aside human rights concerns and fell over themselves to help police prosecute Hicham Yezza and Rizwaan Sabir, a member of staff and a student respectively, for possessing research materials. The university famously declared that students would not be protected from arrest and terror charges for accessing research documents that the state declared to be useful to terrorists. The university has called police onto campus to suppress peaceful protest and routinely does deals with companies that violate human rights, such as Shell, BP and BAE.

Cancellation of the screening of 'Kicking It' on Sunday 4th July

The screening of 'Kicking It' at Broadway Cinema scheduled for Sunday 4th July at 8:45 pm has been cancelled due to unforeseen circumstances.

The team behind the Human Rights Film Festival apologizes for the inconvenience caused.

We do hope that you join us for our other three films. We can confirm that 'Erasing David', 'Starstuckers' and 'Jean Charles' will be screened as scheduled and we are proud to announce that these films will be introduced by their directors.