Highgate farm demonstrations from groups up and down the country

Activists from up and down the country are still regularly protesting outside highgate rabbit farm who still continue to breed animals such as rabbits and ferrets and sell them to be subjected to cruel animal experiments. 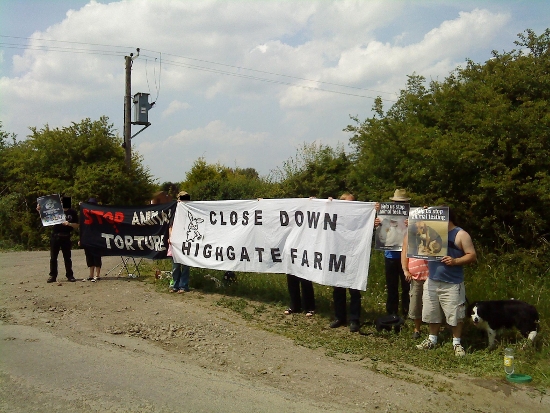 Demonstrations are regularly held outside the farm despite police attempts to deter protesters in one case recently police told protesters to leave the site immediately and not to return for 28 days and being threatened with arrest, an action which goes against the human rights act 1998 the police officer acting in a way incompatable with our right to peaceful protest.

But despite this weekly demonstrations will continue to take place outside the farm and leafletting campaigns in the local village of Normanby by spittal to inform the local public of the cruel industry that highgate farm is contributing to.

Highgate Farm, Normanby by Spital, Market Rasen, Lincolnshire breeds rabbits and ferrets for vivisection. It is almost impossible to believe that in the year 2010, animals are still being bred for experiments in hellish laboratories. But thanks to places like Highgate Farm the vivisection industry continues to thrive.

In 2008, activists rescued 129 rabbits from Highgate; exposing them cramming rabbits in cold, bare metal cages, suspended above thick excrement and urine in windowless sheds. The only glimpse of sunlight these small defenseless creatures see, is when they are loaded into vans to be shipped off to UK laboratories.

Their cruel intentions exposed, the farm briefly refrained from supplying laboratories but after instruction from the police, the farm reluctantly resumed supplying rabbits to laboratories, cold-heartedly putting money before compassion.

Highgate Farm supply laboratories throughout the UK including universities and contract research companies, one of which is Huntingdon Life Sciences. HLS are the most controversial lab in the world, having been exposed numerous times in the past 12 years. Undercover and ex-workers have all expressed their concern over gross animal cruelty, falsification of data, and sloppy work procedures. HLS have been exposed punching puppies in the face, cutting open monkeys while they're still alive, shouting, slapping, and hitting animals, and breaking the law on numerous occasions. As recently as 2008, HLS were witnessed traumatising animals so much they vomited faeces and collapsed. The rabbits and ferrets from Highgate sent there will no doubt endure a similar fate.