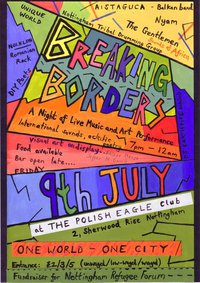 Refugee Week may be over but a new event coming up...

Including eclectic music and poetry from many parts of the world.
Visual artists will have works on display and some live demonstrations!
Stalls about different issues


Other acts to be confirmed, listen out for updates!