July 2010 sees a series of events in Nottingham commemorating the anti-fascists’ fight against General Franco’s coup in the Spanish Civil War of the late 1930s. The 4 events will take place starting 17th July 2010 and include memorial re-dedication, exhibitions, talks and a cinema event. 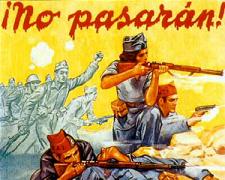 26 people from Nottinghamshire fought as part of the ‘International Brigades’, often on the front line, alongside more famous British volunteers including George Orwell. They volunteered where no western power took a stance against fascism.

4 events are being organised in all including an exhibition and talks at the Nest and a special Broadway Cinema showing of Land and Freedom co-sponsored by The Sparrows' Nest, plus the rededication at County Hall and an exhibition in The Council House.

1) RE-DEDICATION AT COUNTY HALL. Saturday 17th July sees the re-dedication of the International Brigades' memorial to the 26 Nottinghamshire people who fought in defence of the Spanish Republic against Franco and against fascism. It takes place at County Hall, Trent Bridge, West Bridgford, 10.30am to 12.00pm. This event is being put on by the Nottingham Trades Council. They invite you to attend and bring your banners! Details:

2) EXHIBITION AND TALKS AT THE SPARROWS' NEST. On Sunday 18th July the Anarchist Federation's Nottingham group invites you to 'Civil War and Revolution: Anarchism in Spain', 1.00pm to 6.00pm at the Sparrows' Nest anarchist library and archive, St. Ann's. The event is an exhibition on Anarchism in Spain. It explores the role of the anarchists in the civil war and the social revolution, in particular the CNT-IWA, and features talks by members of the Solidarity Federation (the IWA’s British section): ‘Spain, 1936-39’ at 2.00pm and ‘The CNT today’, at 4.00pm. If possible email or leave an ansaphone message to let us know you are coming so we can get an idea of numbers. Contact details can be found at

4) SPECIAL CINEMA EVENT. On Sunday 25th July at 2.15pm Ken Loach’s epic on the Spanish Civil War and social revolution ‘Land and Freedom’ will be shown at the Broadway Cinema. The showing is sponsored by The Sparrows’ Nest and Nottingham’s ‘Peoples’ Histreh’ group. It is dedicated to those who fought fascism in Spain united by the cry “¡NO PASARAN!” (“They shall not pass!”). Advance tickets are only £5. Details of how to get tickets can be found via The Sparrows' Nest website:

“¡A las barricadas, companeros y companeras!” (“To the barricades, comrades!”) 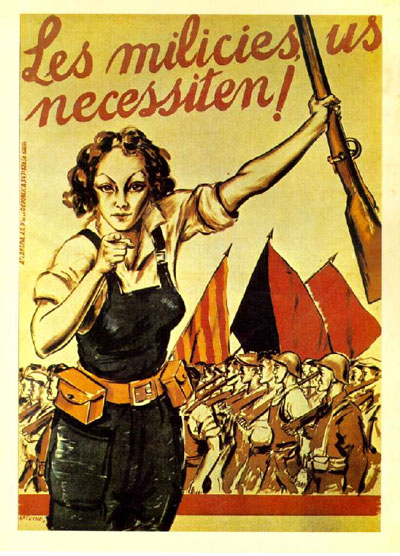 Plus, check out the events bar on the new site :)

Orwell wasn't in the International Brigades

Why on earth would Anarchists want to be involved in events commemorating the Stalinist-controlled International Brigades, who were involved in crushing the antifascist peoples militias and murdering Anarchists?

OK, it should have said militias above, but like many who volunteered, and admitted by Orwell, people didn't necessarily turn up knowing exactly who they were going to be fighting with.
The Spanish Civil War/Revolution had many bad points, not least anarchist 'leaders' going in to form a government, to great cost. It also had many good ones - internationalism, The Collectives etc. We can participate in these events to reflect on all of this. These events are all happening in the same couple of weeks it would be churlish not to mention them all.

Orwell on the International Brigades

"Had I gone to Spain with no political affiliations at all I should probably have joined the International Column and should no doubt by this time have had a bullet in the back for being 'politically unreliable', or at least have been in jail. If I had understood the situation a bit better I should have joined the Anarchists."

I doubt that there are any murdered antifascists turning in their graves at the thought of you being 'churlish' comrade. Good luck with the other events.

why argue, what in the article is incorrect?

More importantly, In Nottingham the Tory council removed part of the memorial to the people from Nottingham that fought in the International Brigades. It was their first act upon coming to power. Clearly embarrassed by the response of the Tory administration of the time. This is a re-dedication of a memorial to the people who had the courage and vision to leave everything behind and fight against fascism in defence of revolution. This re-dedication is not an even organised by anarchists.

However, only a fool can deny the importance of anarchy in the Spanish revolution, and the fact that many “members” of the international brigades switched between various militias etc many times. It was about solidarity against fascism. And if the anarchists of Nottingham wish to show solidarity and pay their respects to this event then I see no problem. Nor do I see a problem if the local anarchists want to put on their own events around the same time to tell the story from their perspective.

If getting involved with local activities and providing an anarchist perspective. Working in the community despite the obvious compromises that have to be made. Or showing solidarity with people who died in the fight against oppression, despite their politics or failings. If these things compromise being anarchists, then I have failed to understand anarchy properly.

If not, then don't be so quick to put down the hard work of others.

It's high time we stop romanticising and glorifying the international brigades. Let's not forget that they were effectively fighting to bring Stalinist communism to Spain, right at the time when the purges were reaching their height in the USSR.

If the communists had won the civil war, the resulting regime would probably have been even worse than Franco's and Spain today would almost certainly be in a worse position than it is now.

Hope you can make it

Indeed, we are putting on the event at the Sparrows' Nest to highlight the anarchists role in Spain. However as has been said the whole set of events would not be happening at all if the County Council had not removed the information plaque from the memorial to get rid of all mention of anti-fascism (almost their first act after taking over leadership of the County). You can see the before and after here:

Our Sunday 18th July event is a opportunity to hear talks by two Solfed members who really know their stuff and who are coming to Nottingham specially to do it. The relationship between the International Brigades and militias can be explored and the role of the anarchists hopefully better understood by everyone. Plus the Sparrows' Nest library and archive has a really good collection of material about the Spanish Civil War/Revolution which will be exhibited throughout the afternoon.

Also there will be some titles available at the Broadway cinema 'Land and Freedom' showing on Sunday the 25th.

Visit the new Nottingham Indymedia site for info on all the events coming up in the area:

Stalinist Intervention was a proxy ruling class intervention in Spain

By the time of the Stalinist Intervention in Spain the USSR was being controlled by the Bank of England (see Hansard) was giving mineral rights to RIo Tinto and Standard Oil, et al, and was building Fordson Tractors under licence. Russian Communism had become the wet dream of the monopolistic Capitalists extracting value from an ideologically driven proletariat without the necessity for troublesome and greedy share holders

The revolution was crushed in Spain by the corporate ruling class because it could not be controlled as it had been in Soviet Russia with Authoritarian Communism terror and purges. The attack on the revolution was two pronged the Stalinist intervention and the second prong being initiated by MI6 flying Franco to Morocco to join the 'rebel' army. and Max Warberg sending in the Condor Legion.