Meeting for an electoral alternative to New Labour, 5 February 2004 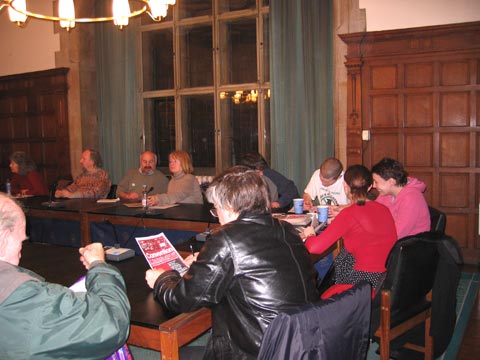 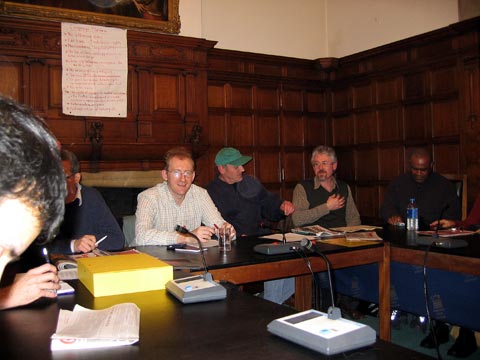 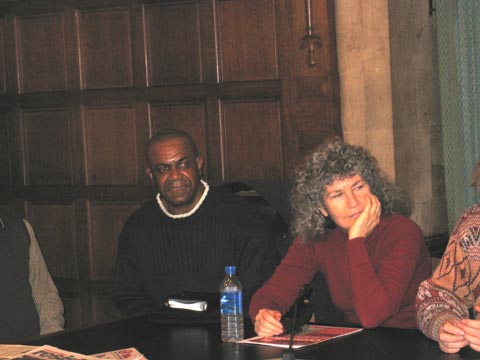 Meeting for an electoral alternative to New Labour, 5 February 2004

In the wake of the recent ‘British Politics at the Crossroads’ rally in Oxford on 19 January, with George Galloway and others, a meeting was held in the Town Hall to discuss how to create a united electoral alternative to oppose New Labour. More specifically, it focused on how to mount an effective challenge to Andrew Smith, Secretary of State for Work and Pensions and Labour MP for Oxford East, who supported the Government decision to attack Iraq.

It also came hard on the heels of the Unity Coalition National Convention, held in London on 25 January where a steering group was set up to establish a new electoral coalition in time for the European and GLA elections in June. Consequently, this meeting had the twofold aim of discussing the overall campaign platform of the new grouping, and how to proceed in the local context.

There were around 40/50 people present, including interested members of the public, but mainly people from organisations such as Socialist Alliance, Stop the War Coalition, Oxford CND, Oxford Green Party etc. George Roe of Oxford SA/ Oxford STWC was facilitator for the evening.

We began with a report back from several people who had attended the National Convention on 25 January. The working name chosen for the new grouping is: Respect – the Unity Coalition. Donna Velluti was very positive about the mood at the convention, which was enthusiastic and showed a great willingness to compromise. People were keen to concentrate on the 85% of areas where everyone was in agreement and downplay divisive issues. Another participant, Mark Ladbrooke, said there had been amazingly powerful speakers. He was specially inspired by the young women Muslim speakers. Other Muslims had been present in substantial numbers but the Muslim Association of Britain (MAB) was unable to affiliate to Respect because of its constitution, but was encouraging individual members to join.

We then turned to the main items on the campaign platform that had emerged from the National Convention, a simplified version of which had been adopted by the Oxford group, namely:

· No top-up fees, equal opportunities for education for all

· No incarceration of refugees, no imprisonment without open trial, respect for human rights

· No waste of money on nuclear weapons. No further development of ‘useable’ nuclear weapons or other breaches of the Nuclear Proliferation Treaty. No arms sales

· Referendum on the euro

· Nationalisation of the railway

There was broad agreement on all these points, the only doubts raised were on the question of the euro. The Coalition had not yet clarified its position on the euro, but it was essential to do so before the June elections. Everyone present was clear that they were against the stability pact which severely restricted government deficit spending, but it was felt that in recent times many on the left, including unions, had come round to the acceptance of some form of common currency.

Interestingly, one point on which there had been broad agreement at the London meeting but had not been included in the platform was the question of immigration. Apparently most people had wanted to see an end to restrictions on immigration, but it was felt that currently this would be a policy too far for the British public.

Discussion now turned to the situation in Oxford. Nuala Young of Oxford CND felt it was important for the Oxford group to establish close links with the national coalition, yet retain its independence. Research needed to be done on issues such as the stability pact. Sarah Lasenby, on a point of process, said the meeting should aim for concrete decisions and a plan of action, including the setting up of working groups. Elise Benjamin of Oxford Greens felt that their Party had been sidelined, but was assured by those present that the Oxford Green Party, with its 30 years record of hard work in the city, had an important role to play. Strong support was also expressed for Caroline Lucas, Green MEP for the area. Later Elise mentioned that the Green Conference will be in March when the issue of affiliation to Respect will be decided. Mark Levine stressed the need to educate the general public on issues of peace and democracy, and communicate with them in a very clear and transparent way….

Mike from STWC felt we need the link with Respect as votes could be gained by being part of something much greater. Zaid said that anybody who has contempt for the present government will want the chance to put a political earthquake under it. They will need a Respect candidate. Jill Haas said that it was good that Respect supports Caroline Lucas but that locally we need someone who represents the people in Oxford.

John of SA asked if Caroline Lucas could be invited to speak at a meeting. Martin Gregory hoped we would form a joint slate of Respect and Greens for the European elections in June. He put a motion that we form an Oxford Respect Group from this meeting. John Lister said that as the European elections are on a PR List Respect has the best chance to get elected. Lucy Ford who has worked for Caroline said that an important decision was which group to belong to in the EU parliament. Donna said we need to make links to global issues and to have a united front of the left that will actually win. Hopefully the European election can be exploited and give us more momentum.

We were not all in agreement on the proposal to form an Oxford Respect group so this was left for the moment and a working group was set up to take things forward. People seemed to agree that we will at least affiliate to Respect in due course. Winston Palmer of the Postal Workers and representing the Afro/ Caribbean community was introduced to the meeting and along with a number of others he joined a working group to carry things forward.

The next meeting will be on March 2nd at the Town Hall.