Yesterday a Shell recruitment/PR booth on Broad St (Oxford), was shut down by the combination of leafletting, disruption and damage. 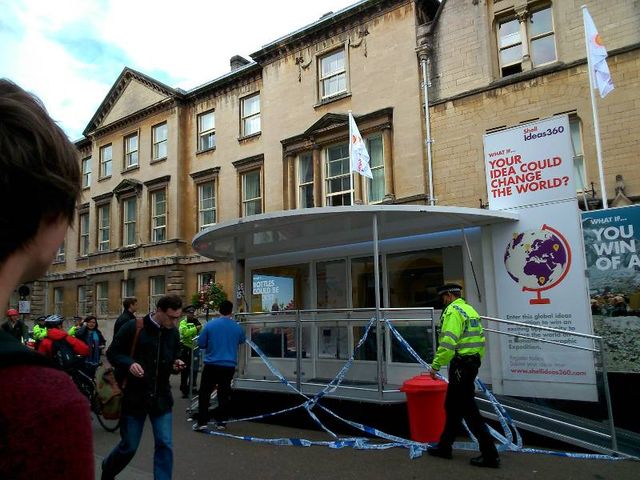 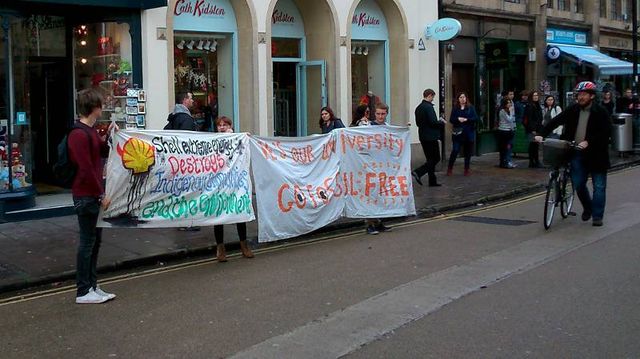 Shell set up a fairly large structure in Broad St yesterday, an plush enclosed unit with mezzanine floor and carpet, to plug their latest PR/recruitment scheme. They were planning to be there from 10am until 6pm, but things didn't go according to their plans.

A protest had been called, and around lunchtime people started arriving and giving out leaflets. Earlier the Shell PR people had been roaming around the street chatting to people and giving out glossy bullshit, but once protesters arrived they seemed to withdraw a bit more into their self-built shell. One person heckled them enthusiastically.

Then, about 12:45pm, another group arrived, went inside, grabbed handfuls of Shell propaganda, poured black oily stuff everywhere, and wrote anti-Shell slogans on their whiteboard (in permanent marker, apparently - it looked like they weren't able to remove it!). I heard that the oily stuff even went all over their computer gizmos, presumably causing quite a bit of damage.

Unfortunately as they were leaving they got chased and grabbed by security, and despite a struggle were handed over to the cops and arrested. Meanwhile Shell had apparently had enough, as not long afterwards they packed up and went home.

The 3 arrested people were released about 11 hours later - all 3 had been given cautions for criminal damage, and 2 also had fixed penalty notices (£90 each) for obstruction. They all seemed fine with this outcome.

Here's an article from some of the people that organised the leafletting session, explaining why they were there:

http://tarfreetowns.org/news/oxford-is-saying-no-to-shells-whitewashing/
...it has some decent stuff in it but doesn't mention the longstanding struggle in Rossport, Ireland against Shell's occupation there, which for me personally was near the top of my mind when I went along to the protest:

Shell have been targeted plenty of times before when trying to run graduate recruitment events in Oxford:

http://oxford.indymedia.org.uk/2010/03/447286.html
(as have other oil companies), but this was the first time I know of that they'd had the gall to do an event on the street (usually they are in some kind of plush hotel).