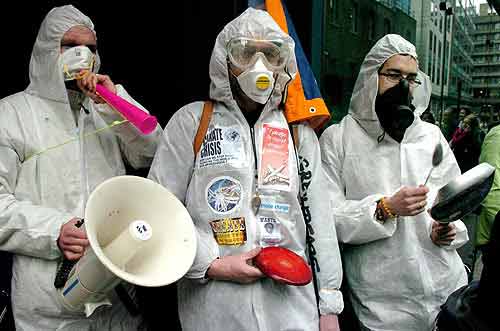 Derbyshire Constabulary has invoked Public Order legislation to limit disruption to the local community while allowing peaceful and legitimate protest near the G8 conference at Breadsall Priory. For details of the orders please visit our website www.derbyshire.police.uk

There is every indication that the earth is experiencing the early stages of catastrophic climatic change. Small increases in temperature will lead to:
• Sea level rises of up to a metre as the warming water expands and glaciers melt, flooding many of the most populated coastal regions on the planet, leading to loss of infrastructure, loss of fertile land and massive human migration.
• Changes in the growing season, likely to cause widespread crop failures as farmers take time to develop new agricultural practices and planting patterns. Will also lead to the loss of up to a million species.
• The spread of pests and diseases (e.g. malaria-carrying mosquitoes) as northern regions become hospitable to them. This may lead to further crop failures, and certainly increased use of pesticides.
• There will be many more extreme weather events (flooding, drought, typhoons, etc), destroying more crops and exacerbating the humanitarian disasters already mentioned.

We can stop this!
It is a phenomenon brought about by Western Civilization’s addiction to fossil fuels and we can avert disaster by fundamentally changing the way we live – but is that what the G8 ministers are discussing?

Do you think they are working out how to limit the international movement of traded goods? How to stop the mindless production which exists purely to drive economic growth? How to drastically reduce car use by discouraging commuting and car ownership?

It seems more likely that their main focus is on how we can limit the effects of climate change, so as to maintain economic growth. Or perhaps the focus is how we can export our lifestyle to the developing world, so that millions more can contribute to the exploitation of the earth as equal partners, rather than purely suffering from its terrible consequences.

We want to show our desire for change – for a more equitable world, where individuals have direct control over land and food, where livelihoods are not destroyed by market speculators, where peoples cannot be held to ransom by their rulers and where personal and national security are not ensured by greed, self-interest and repression.

People will be taking over Derby’s market square with banners, music and street theatre. The Council of All Beings will bring world leaders to trial, charged with knowingly allowing our world to be destroyed. The message is loud and clear: we cannot continue as we are - there will be a radical change in society. Let it be of our choosing, not forced on us by disaster.

£2 million is being spent on policing the ministerial conference - it seems the police have been carried away by the media hype, whipping up fears of mindless chaos and destruction. Apparently the world’s most powerful governments, the World Bank and corporate lobbyists must be protected from those who seek a better future. This conference is pure greenwash - an attempt to convince the public that our interests and the earth are best served by the rich and powerful, which has surely never been the case.

I hope the people demonstrating in Derby tomorrow have a good time - our future is about fun, sharing, compassion, dancing, sustainability, humour, self-sufficiency and mutual aid. It is about control over our own lives and direct action to defend the earth and its inhabitants.

There was some Internal issues European Ministers demo in Warsaw as well...:

...'unfortunately' in Polish,
and I want be translating now (maybe in a free time moment... soon)