Party At The Pumps Part 2... This Time It's SHELL! 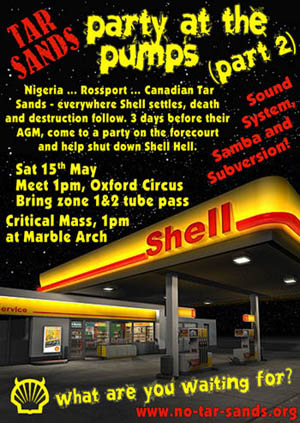 Shutting down a petrol station for 5 hours on a sunny Saturday afternoon was so much fun we’re going to do it again. Shell’s Hell – in the tar sands and beyond – is next in the firing line.

Party 1 had Samba, twin sound systems, a live Ceilidh band, face-painting, free cakes and 200 people. Party 2 will be bigger and better, with activists joining us from Brighton, Oxford and beyond. See here for a movie of Party at the Pumps Part 1:
» video, 5:14 –

And for all you cyclists out there, there will be a special Critical Mass ride making its way to the party.
• What: Party at the Pumps Critical Mass
• When: Saturday, 15th May
• Meet: 1PM at Marble Arch (under the arch)
» Marble Arch meeting point map –

Get ready for sunshine, music, and dancing on the forecourt!


Why target Shell?
Party at the Pumps Part 2 is taking place just three days before Shell’s AGM, where the company will come under fire from shareholders over its plans in the Canadian tar sands; and a week before the Merthyr to Mayo solidarity bike ride, which will link two communities in Wales and Ireland resisting fossil fuel extraction.

Party at the Pumps is in solidarity with communities around the world who are resisting Shell’s destruction of lives and livelihoods, poisoning of lands and waters, and fuelling of climate chaos. In Northern Canada, Shell’s tar sands projects are ignoring First Nations treaty rights, causing rare forms of cancer and killing wildlife (

http://www.ienearth.org/tarsands.html ). In Rossport, Ireland, a dangerous onshore pipeline and massive refinery are transforming an area of outstanding natural beauty into an environmental disaster zone with serious public health and safety implications (

http://www.rossportsolidaritycamp.org ). And in Nigeria, where Ken Saro-Wiwa and eight Ogoni colleagues were hung by the Nigerian state for campaigning against Shell’s devastation of the Niger Delta, resistance to Shell and Big Oil continues (

These struggles may be happening in distant places, but they are driven from Shell HQ. On May 15th, we bring the resistance to the heart of London.