The Wrexham Peace Day Group has co-ordinated local peace days in September for the past few years. In 2012 the group worked with St Christopher's school to put together a day of peace education and activities that was attended by over 300 children aged 7-19 from ten different schools, followed by two days for peace in the middle of town. Another schools day is planned for this year on Friday 20 September with a day in town on Saturday 21.

Thanks to generous offers of time and skills, we've also been able to offer sessions on peace related themes in schools during the summer term this year. A couple of weeks ago, children in two primary and two high schools learned about nuclear weapons and the peace movement in sessions delivered by Julia Herzog from Faslane Peace Camp; over the next couple of weeks, Camilla Cancantata from Footloose will work with children from two schools to create music for peace, while Fiona Collins will tell peace stories from different cultures to children in three more schools. This week and next, however, the focus is on Palestine, with Ann Farr of EAPPI and Rod Cox of CAPE speaking to local children about their work. 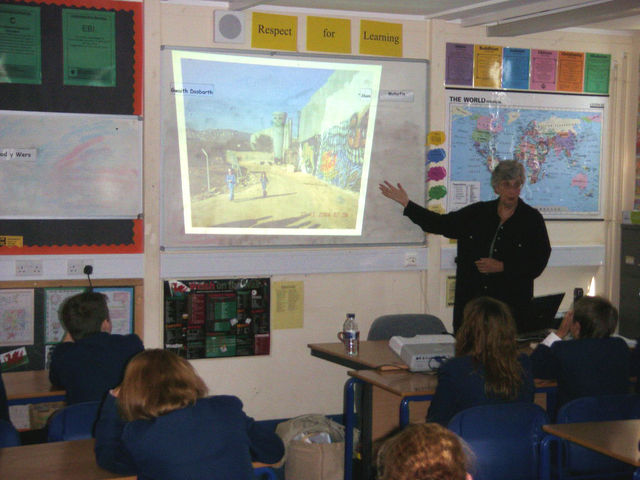 Ann Farr speaks about her work in Palestine 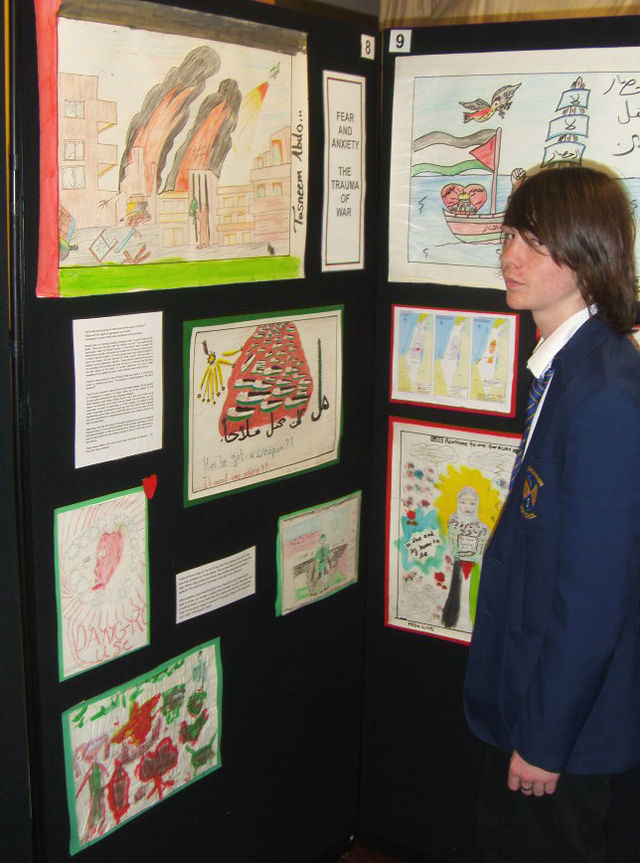 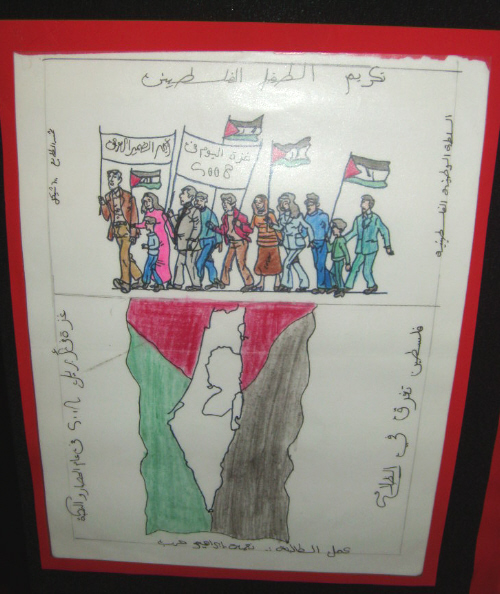 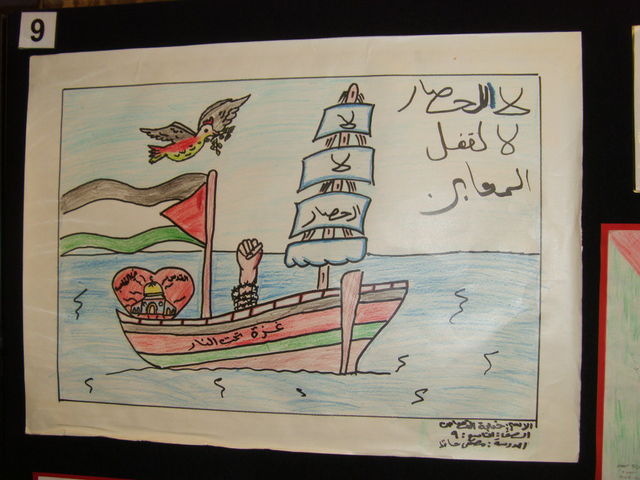 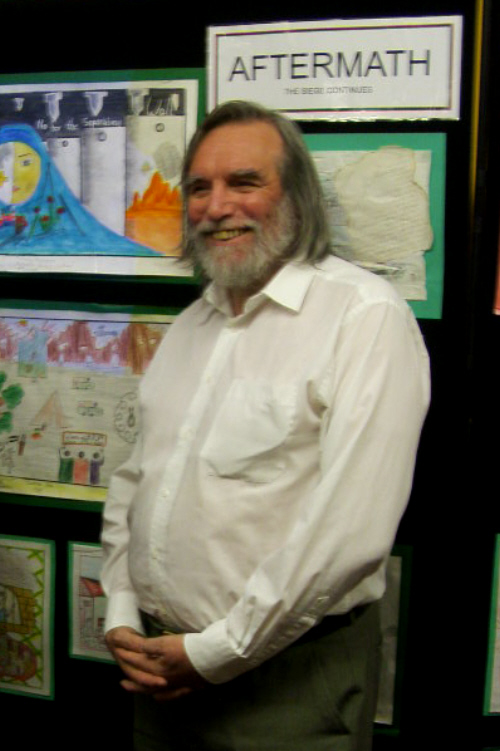 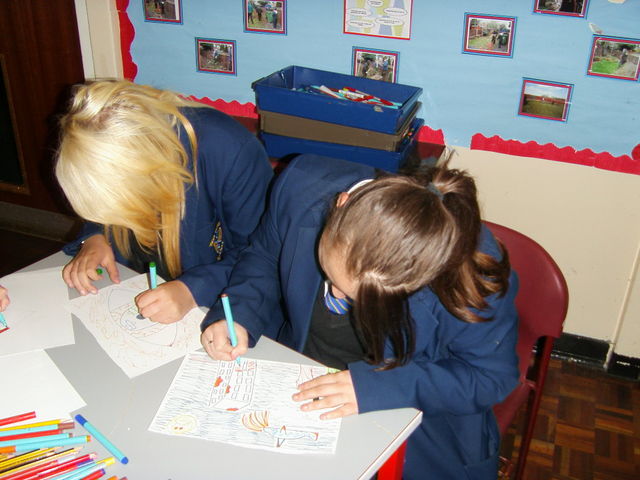 kids create their own artwork 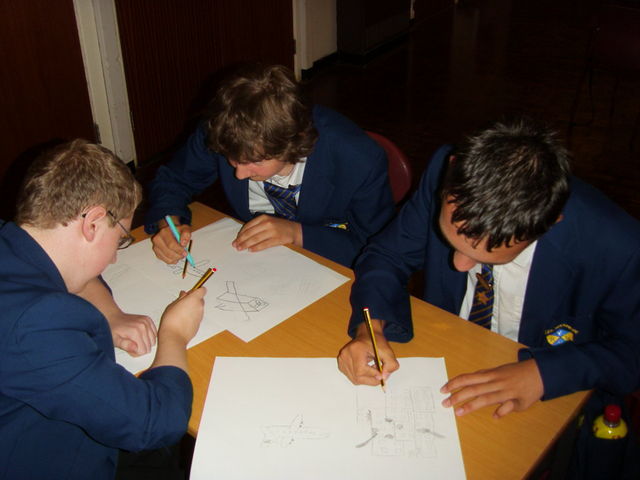 Life Behind the Separation Wall

The Ecumenical Accompaniment Programme in Palestine and Israel (EAPPI)

"brings internationals to the West Bank to experience life under occupation. Ecumenical Accompaniers provide protective presence to vulnerable communities, monitor and report human rights abuses and support Palestinians and Israelis working together for peace. When they return home, EAs campaign for a just and peaceful resolution to the Israeli/Palestinian conflict through an end to the occupation, respect for international law and implementation of UN resolutions."

This week and next Ann Farr is working in a total of five primary and secondary schools, speaking to pupils about children in Palestine and Israel, her work as an Ecumenical Accompanier and in particular the impact of the separation wall on the lives of Palestinian children.

'Loss of Innocence', an exhibition of children's art from Gaza created in the wake of the 2008-9 bombardment and invasion by Israel, has been on display Wrexham since the beginning of May, firstly at St Mary's Cathedral, then in the busy learning resource centre (library) of Yale F.E. College and since early June in St. Christopher's school where it will remain until it moves on to Oswestry mid-July and from there to Birmingham and Cardiff. If you're situated between Birmingham and Cardiff and can offer a venue to display the work during August, then let us know.

Yesterday, a group of Year 10 pupils came to see the 'Loss of Innocence' exhibition at St. Christopher's and to learn from Rod Cox of Chester and Palestine Exchanges something about the lives and traumas of their counterparts in Palestine who had created the artwork. Many of the Palestinian children had lost members of their families, in some cases their whole families in the attacks. After the talk and slide show, the pupils spent time viewing the exhibition and created artwork of their own.

Wrexham Peace Day Group would be interested to hear from anyone else around the country working on peace issues in schools. Is the Peace Education Network still active, for instance?

Also, if you've got a talk, activity or workshop you can offer and would be willing to travel to Wrexham (north-east Wales) to do it, please get in touch. We're still looking for a few more volunteers to offer sessions on our 20 September schools Peace Day and can organise visits to schools throughout the year. The range of offers to date has been very wide, from groups such as Veterans for Peace; Forces Watch; Alternatives to Violence Project; Movement for the Abolition of War; CAFOD; The Absurd; Give and Take; Rainbow Therapies, as well as from a number of individuals not working under any particular banner. Topics covered have included life in the military; the militarisation of childhood; street children in Iraq; a variety of approaches to conflict resolution; Sikh seva; singing including signed singing; poetry; craft; holistic therapies; gift economy; veganism.

Human Rights in the West Bank, Palestine.
An eye-witness account by Ann Farr