On Thursday 8th August, at approximately 10am, High Court bailiffs showed up to join United Welsh representatives, police and contractors booked to secure buildings, in an attempt to evict Rumpoles, Moira Terrace, Cardiff, CF24 0NE (aka: prison squat / 0ne squat). By 12pm, without even attempting to enter, they left the occupiers in possession of the building. 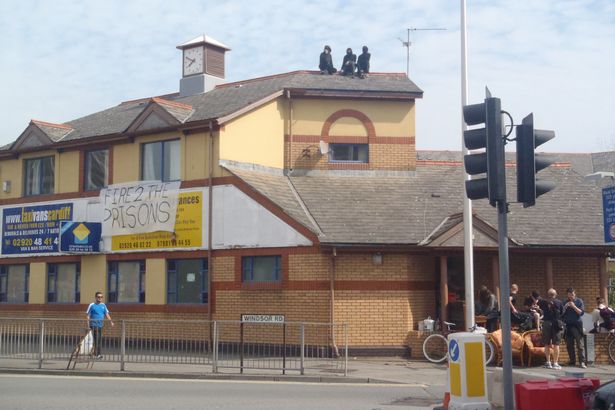 At 9:30am the first few supporters started arriving outside, while some squatters took to the peak of the roof. The outside had been barricaded with furniture, gas bottles, compressed air canisters and a piano, while the inside was well secured. A ‘Fire 2 the prisons’ banner had also been dropped from the windows the night before, during significant disturbances within Cardiff prison over the road.

Four police officers from Roath arrived warning the resisters that possessions used to barricade would be cleared away by the council, stating ‘Your rubbish makes Roath look poor’, even though the squat is in Adamsdown, but otherwise ignored the situation and promptly left. At this point neighbouring prisoners began shouting in support of the squatters and against the cops.

The rest of the day was spent receiving strong support from, passersby and locals, particularly in the neighbouring Adamscourt, also owned by United Welsh Housing Association. While supporters continued to play piano and eat the skipped bakery goods from the night before.

Prison squat has been lived in for 3 weeks, and has hosted an anti-fascist benefit gig, No Borders film screening, prisoner letter writing, as well as other events. United Welsh plan to demolish the building. This work is to start no sooner than February 2014, in order to build 49 1 to 2 bedroom flats for ‘vulnerable people’, whilst denying the Adamscourt residents access to communal greenland in the process. Attempts from squatters to negotiate with owners have repeatedly failed.