Moneylenders and bailiffs targetted in Blackwood

Anonymous made an appearance in Blackwood on Tuesday, protesting against profiteering moneylenders as part of an international day of civil disobedience. 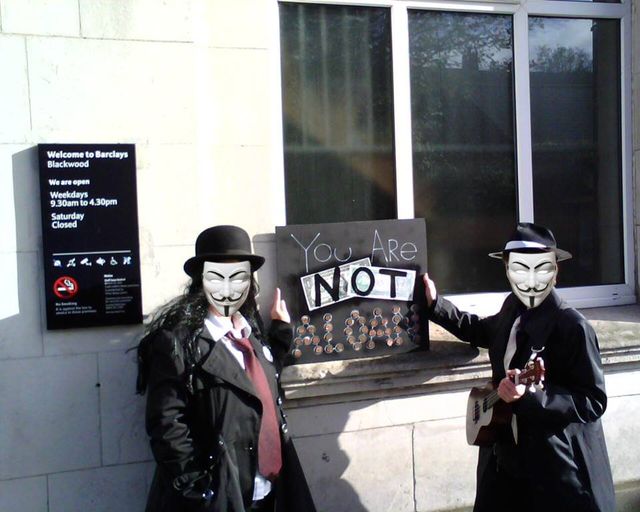 A small group of people, armed with a ukulele, leaflets and a blackboard saying "You Are Not A Loan" entered several banks, moneylenders and bailiffs on Blackwood High Street. Customers and employees were treated to a song and dance routine. About 10 different places in all were visited; we gave out about 150 leaflets. Police attended but found the last performance had already finished.

One Anon: "Hopefully we brightened their day, but there's also a serious message. I mean, is it right that a few individuals should make a handsome profit out of other people's misfortune?"

Another said "The banks have had government handouts to lend to people and make a profit from. That's our money - tax-payers money - that we're having to borrow back at extortionate rates, and for what? To make rich people even richer. If the government really represented us they would be lending to ordinary people for free."

Not everyone agreed. The manager of one of the moneylenders visited said "We're not as bad as Wonga; people should target them instead."

----------
The day of action on November 5th was billed by Anonymous as the "Million Mask March" and by the People's Assembly Against Austerity as "The Bonfire of Austerity". Actions took place in around 500 locations worldwide.

45% of households in Wales are in debt: