Yesterday, 17/12/2014, was the 27th birthday of Chelsea Manning. Several groups conducted a noise demo outside the US Embassy, London to support the call for her release. 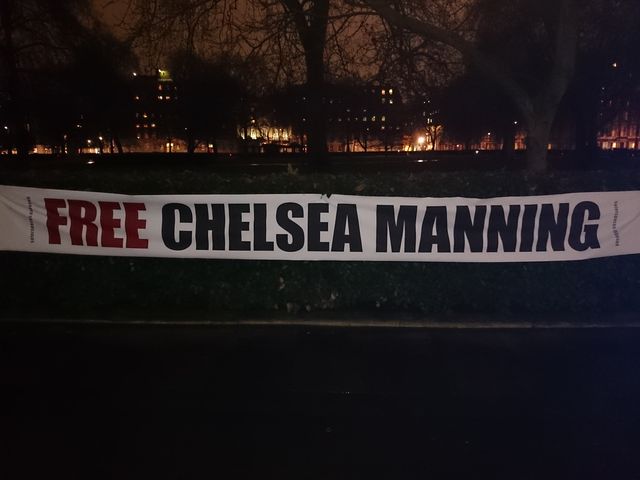 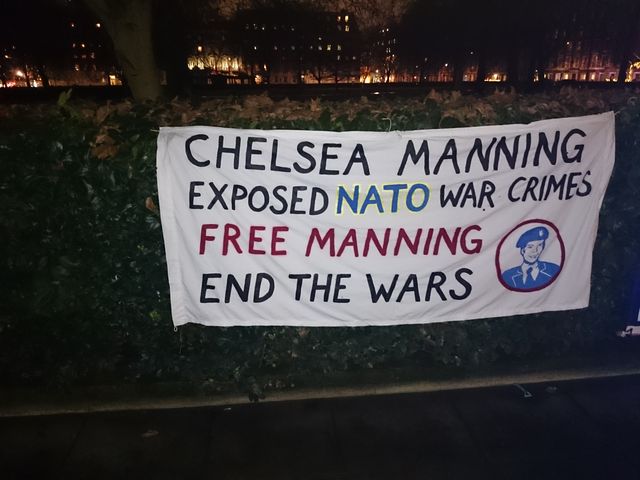 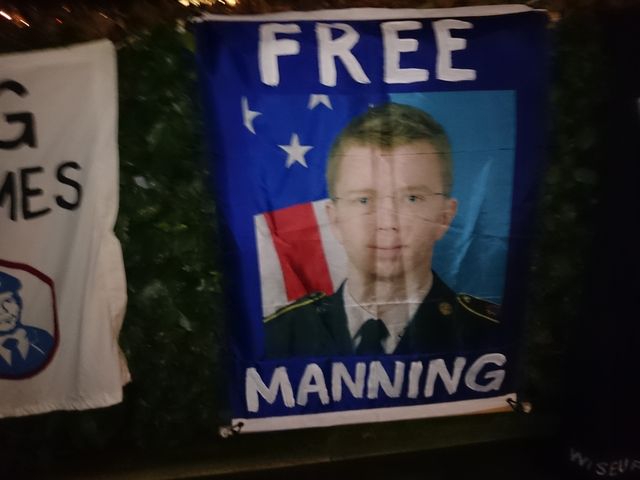 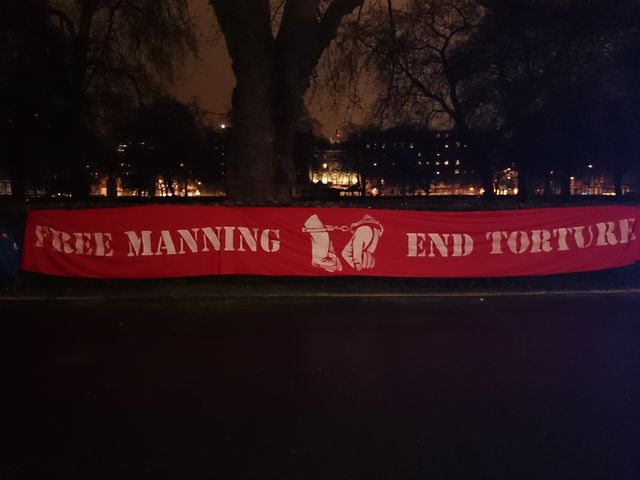 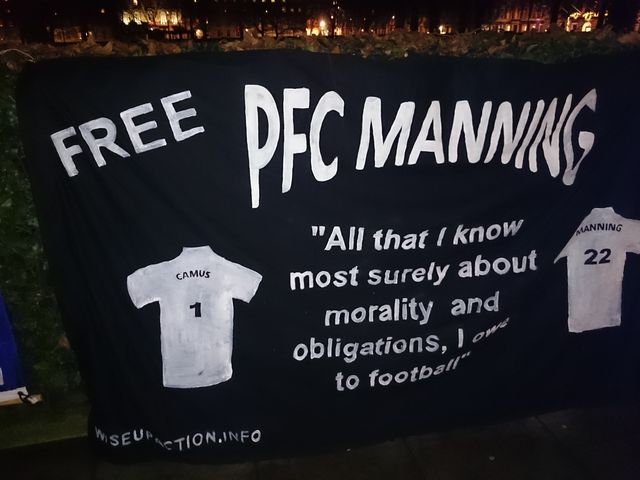 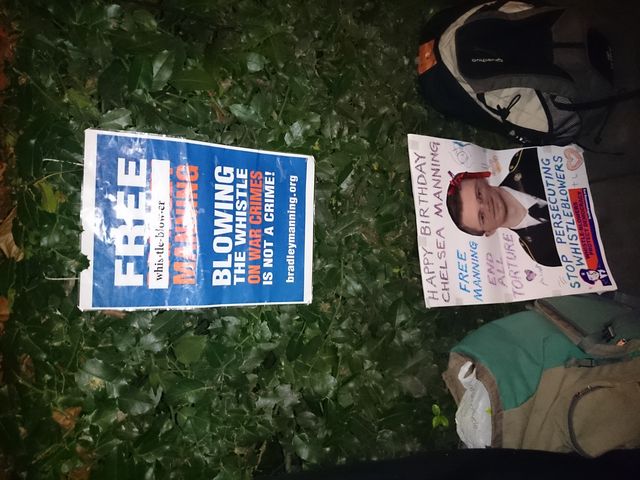 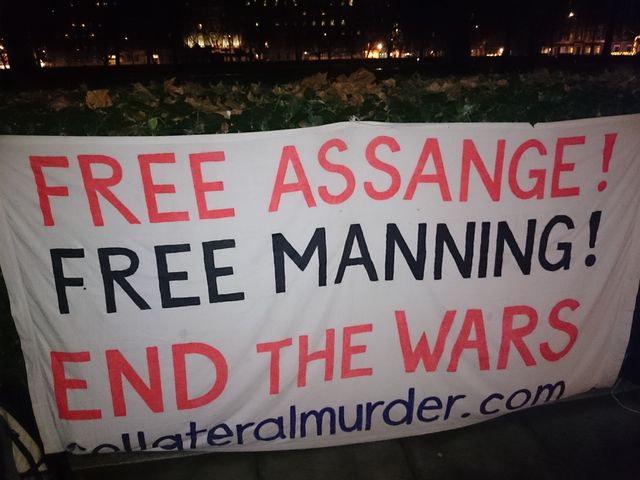 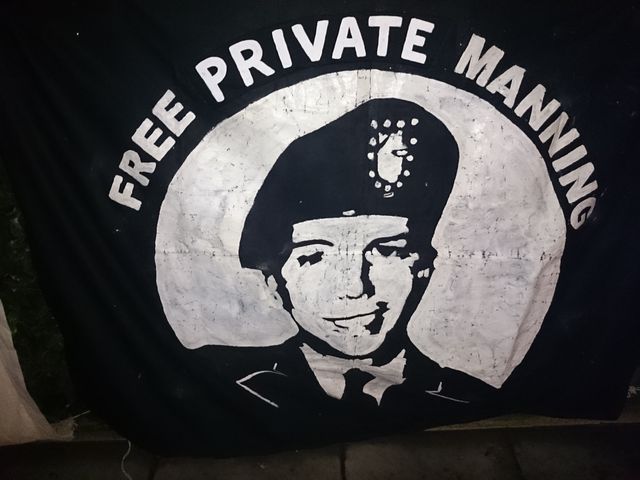 The Solidarity Collective, Wise Up Wales and The Black Banner held a noise demo outside the US Embassy last night in support of Welsh-American whistle-blower Chelsea Manning. They were joined by Queer Strike and The Pay Day men's network after their successful vigil outside St Martin-in-the-Fields.

20+ people turned up with placards and many banners. The soundtrack from the Collateral Murder video was played at high volume through a sound system, inter-spliced with audio of Charlie Chaplin's speech from the film The Great Dictator. There were several eloquent and rousing speeches which made clear to those inside the embassy that Chelsea had not been forgotten.

It is common knowledge that Chelsea is serving 35 years in prison for the release of information some of which formed the Afghan War Diaries, the Iraq War logs and the Collateral Murder video which exposed the cruel murder of several civilians, including two Reuters reporters and the shooting of two children. What is often forgotten is that US claims that the released information put lives in danger and caused damage to the US do not stand up to scrutiny.

For a start it has to be remembered that governments all over the world release classified information in the form of leaks to newspapers every week when it suits them. Journalists like Bob Woodward have made careers out of this form of information release.

Secondly, none of the released information was Top Secret or compartmentalized, nor did it discuss current or ongoing military operations.

The Collateral Murder video was reviewed by a U.S. Central Command as not even being classified at the lowest level.

The Diplomatic files were anything but secret having been released to over a million government workers including private contractors.

The only files that could have caused immediate danger to lives were the Human Intelligence files (HUMINT) which concerned the identity of intelligence sources and intelligence tactics. These were never released by Manning. Consequently there has been no evidence that any one has been killed due to the release of the Wikileaks files.

Finally, several US government damage assessment reviews, including one by the Information Review Task Force, have all found that there has been no damage to the US as a result of these leaks.

"During times of universal deceit, telling the truth becomes a revolutionary act."

All of this means that any person of sound mind can only conclude that Manning has been made an example of. She has been imprisoned as a warning to others who may think of daring to the tell the truth. Governments propagate the illusion of an open society with tools such as whistle-blowing laws and processes. Manning tried to use internal reporting processes to alert her superiors to injustices and was told to shut up and put up. The New York Times and Washington Post both ignored her. Wikileaks stepped up to the mark and as a result they have been attacked by governments on and off line, had their funding streams cut and Julian Assange, editor-in-chief, has been trapped in the Ecuadorian Embassy for the past two years in fear for his liberty from the land of the free. Irony exists in reality and in fiction but in the former it is often more unbelievable than in the latter. The US invaded the middle east supposedly to promote democracy, whilst at home it curtails any transparency and accountability so that it can export its 'democratic values' with the barrel of a gun.

Solidarity to Chelsea Manning, Julian Assange, Edward Snowden and all the others that have sacrificed themselves so that we may know the truth.