Remember the Manning Truthfest in January 2014? Well, it's back!

A troupe of Irish musicians, actors and activists supported by Afri will travel across the Irish sea to Pembrokeshire on 23rd January for a solidarity weekend for Chelsea Manning and her Welsh-Irish family. 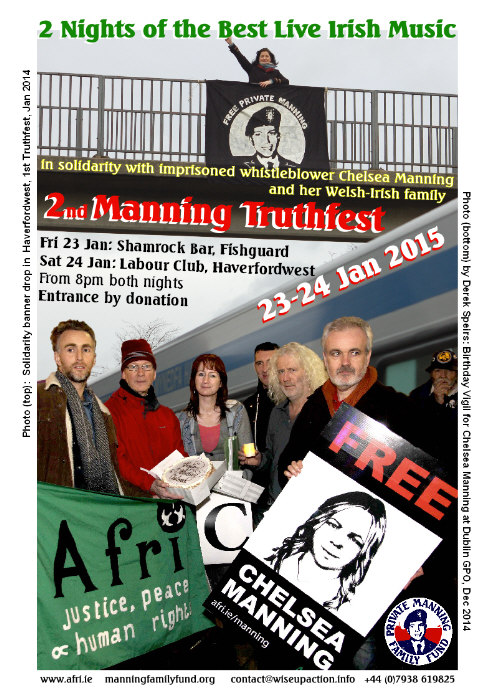 Welsh-American US military intelligence analyst Chelsea Manning blew the whistle on US-led wars in Iraq and Afghanistan with the War Diaries and the infamous Collateral Murder video, on Guantanamo Bay with the Gitmo Files, on US 'diplomacy' and much more with Cablegate, all of which were published by WikiLeaks.

Chelsea Manning (then known as Bradley Manning) was tortured in pre-trial detention and held for over three years before trial. In August 2013, she was sentenced to 35 years in a US military jail.

All these and more will be coming together to perform live for two nights in Fishguard (Fri) and Haverfordwest (Sat), along with other Irish and Welsh supporters of Chelsea Manning and members of her family.

Entrance by donation on the door.

Join us to celebrate Chelsea Manning's life and courage and to call for her freedom.

Support Chelsea's Welsh-Irish family with a donation to the Manning Family Fund.