2 – 8 November 2015: Week of Action Against the North Wales Prison & the Prison Industrial Complex

A week of action has been called to encourage people all of the UK & the world to take action against the construction of the North Wales Prison in Wrexham. 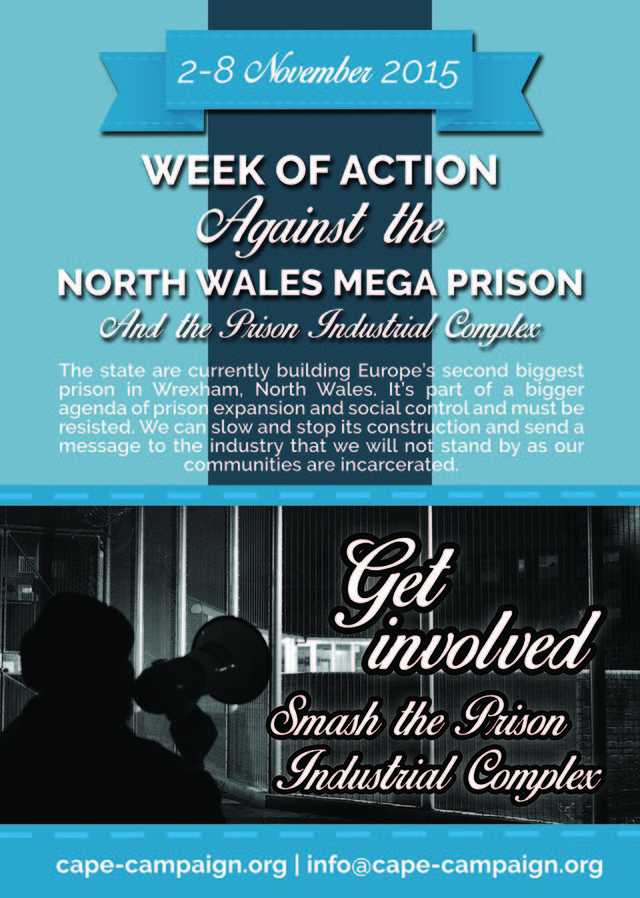 About the Week of Action

A week of action has been called to encourage people all of the UK & the world to take action against the construction of the North Wales Prison in Wrexham.

The prison will be the second largest prison in Europe, holding more than 2100 people and costing £250 million to build. Australian contractor Lend Lease was awarded the contract to build the Wrexham titan prison by the government in May 2014 [

Local people have resisted the prison for over half a decade; objecting to planning applications, lobbying, going to meetings. Full planning permission was eventually granted in November 2014 despite local resistance. It is now a construction site and this place of abuse and oppression is being built as we speak.

Our aims are to resist it, slow it down and send a message to the state and the prison industry that it is not acceptable to profit from caging human beings. The Government wish to build more prisons in the UK, this is our opportunity to intervene and prevent this industry from expanding. We must take the offensive against prison expansion and the social control of our lives. We are fighting until all are free.

What is taking place?

Demonstrations at the prison and its suppliers. Find your local prison profiteer here:

Noise & solidarity demos at prisons all over the UK

The CAPE Campaign will also be supporting existing events taking place during the week including:

The United Families and Friends Campaign (UFFC) Annual Procession on 31 October. The UFFC is a national coalition of families and friends of those that have died in the custody of police and prison officers as well as those who are killed in immigration detention and secure psychiatric hospitals in the UK. Assemble 31 October 12Noon at Trafalgar Square for a silent procession along Whitehall followed by a noisy protest at Downing Street.

How to Get Involved

Most people will be taking action locally, however we are organising transport and accommodation for people from further afield to stay in the North West. Please get in touch!