The first full year of Shropshire Badger Group's TB vaccination scheme - offered completely free of charge to local farmers and landowners - has been a big success, but more volunteer manpower and funding are needed. 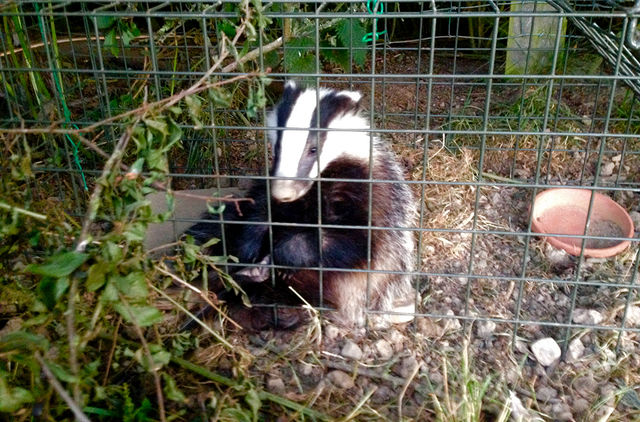 Local wildlife charity Shropshire Badger Group have described as “a resounding success” their first full year of offering free badger vaccinations against bovine tuberculosis (bTB) to farmers and landowners around the county. Bovine tuberculosis is a serious, slow-growing respiratory disease of cattle which can also be transmitted to wildlife.

“Needled” by the fact that thousands of perfectly healthy badgers had already been experimentally slaughtered in parts of Gloucestershire, Somerset and Dorset as part of Government attempts to fight cattle TB, and appalled at the prospect of hired gunmen roaming around their local countryside at night if the badger cull were brought to Shropshire, the unpaid volunteers of Shropshire Badger Group decided in 2014 to put their expertise, resources and funds into their own badger vaccination scheme.

A total of 41 badgers across 9 sites around Shropshire have now been vaccinated during 2015 by specially trained and licensed volunteer vaccinators and their assistants, all members of Shropshire Badger Group.

A spokesman for the Group explained that the work involved braving steep hillsides, unsociable hours, and weather conditions that ranged from blistering sunshine to torrential downpours.

The spokesman continued: “Government research has shown that not only does vaccination significantly reduce the direct risk of an individual badger developing the disease, but it also provides some indirect immunity to unvaccinated badger cubs. Not every individual badger needs to be given the vaccine, which is similar to the BCG vaccine used in humans. If more than a third of the adult badgers in a social group are vaccinated, the risk of the disease developing in unvaccinated cubs is reduced by 79% and this means that eventually the total badger population is likely to become immune to TB.”

Shropshire Badger Group’s spokesman summarised: “We are dismayed and disappointed by the continuing delays in implementing the obvious solution to bovine TB, which is to vaccinate the cattle themselves. We know that there is a scientifically proven cattle vaccine available, but that its deployment is being obstructed by political shenanigans. That’s why we brought in our own badger vaccination programme and we shall be continuing with it in 2016. We believe our scheme makes a positive contribution in the fight to control bovine TB and to help the farming community. We are always keen to hear from anyone who would like to get involved with our work in any way, including donations from well-wishers. We can be contacted via our helpline on 01743 271999, our website www.shropshirebadgergroup.co.uk, our Facebook page, or even our Twitter account @shropsbadgers.”