The action at AWE Burghfield is a June-long continuous protest organised by campaign group Trident Ploughshares (www.tridentploughshares.org), which is dedicated to ending the UK's nuclear weapons programme.The action by Welsh activists from Gwent, Newport, Swansea, West Wales and Powys continued the blockade of the nuclear weapons plant by anti-war activists from around the UK and the world that has closed the Construction Gate and protested at the North Gate at the plant since 6th June. 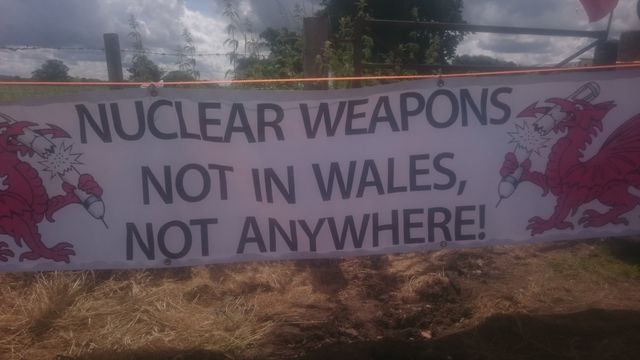 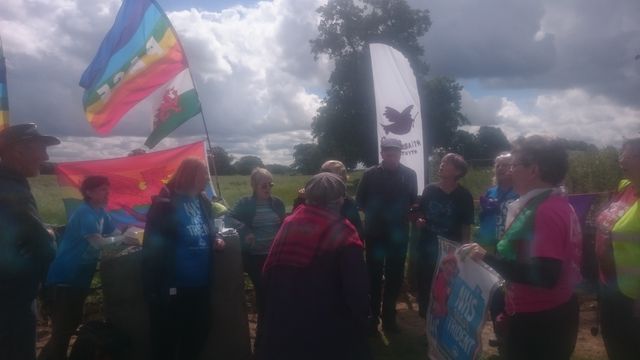 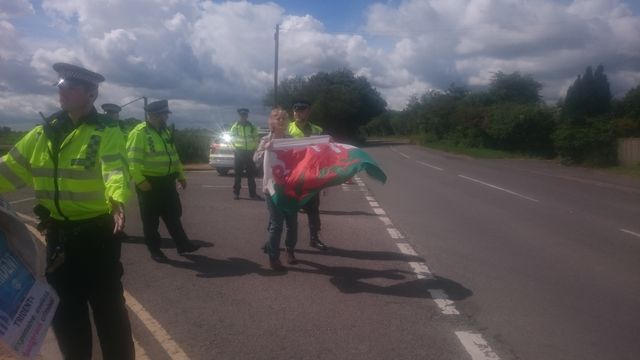 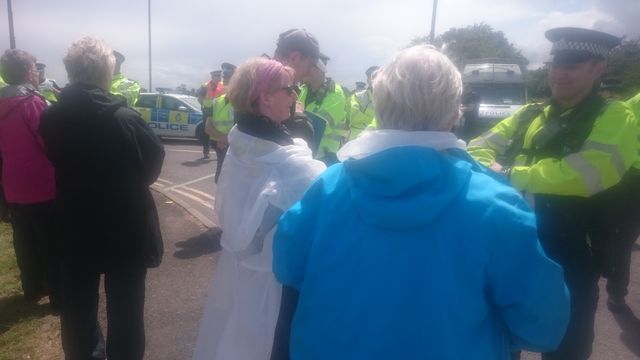 The Welsh Action Day at Atomic Weapons Establishment Burghfield on 15th June passed off peacefully and without rancour. The sun shone in long spells for most of the morning. Grey clouds passed over but didn't spill. The light breeze was warm.

Singers from Welsh choirs Cor Cochion (Cardiff) and Cor Gobaith (Aberystwyth) greeted workers arriving at the plant from 07.15 with protest songs calling for the scrapping of Trident specifically and nuclear weapons generally; for the ending of war; for peace; and for the securing of the planet and the future for our children.

“Obscene amounts are spent on useless nuclear weapons, while support for the most vulnerable in our society is under constant attack by this government” said Wendy Lewis, activist from Caerphilly and Cor Cochion singer. “Cameron has forced a hugely destructive and expensive referendum on us about Europe, but no one has asked us if we want these dangerous and expensive weapons of mass destruction".

A peace camp established at the Construction Gate has maintained the action continuously through every night. Construction traffic has not entered the plant since 6th June (staff access is not impeded; protesters have no desire to take any action that might jeopardise the safety of a nuclear facility). Activists passed a peaceful night on 14th June, singing, playing guitar, some sleeping. A van arriving through the night concealed a delivery unnoticed by the watchful police.

The nocturnal delivery was a submarine. The width of a road when assembled, the submarine is a plywood prop in five sections, made for symbolic non-violent direct action. At 09.00, five activists moved. Dragging the sub across the road, they 'locked on' with chains, one to each section, and blocked the gate in a sitting protest. At 10.00 police gave the sitting protesters an hour to remove the sub and themselves from the road. The hour passed peacefully. Four activists, quietly and unseen, disconnected themselves but remained in position. At the appointed hour, as police approached to take action, the five stood and the submarine fell away in four sections, one section hanging on to one activist.

The police separated the remaining sub section from its activist, cutting the chains, and thereby enacting the symbolic disarmament of Trident that the plywood sub is meant for. Trident is illegal under international law. As upholders of the law, the police should seek actively to bring about its disarmament. 'See how easy it is to disarm Trident?' called activists, applauding, as the police, in taking apart the prop, symbolised the action they should be taking in life.

At the North Gate, camping gas kept protesters in tea and coffee, and home-made Bara Brith fuelled unceasing, passionate singing. A peaceful morning passed into a peaceful afternoon, interrupted by periodic frenetic activity as handfuls of activists attempted sitting protests in the roadway and were repelled by police, one lifted bodily to the verge. One, carrying the Welsh flag before her, accompanied by the choir on the verge, valiantly sang and sang, with all her heart, as police pushed her back.

Most of the Welsh groups left for home in the late afternoon. Those who remained lit their camp fire in the peace camp and prepared for another night keeping the blockade going at the Construction Gate. The following days' protesters – for Academics Day, 16th June - gathered at the peace camp and talked late into the evening. One local supporter slept in a car parked immediately in front of the gate. The rest of the Welsh group slept in the camp.

The blockade ends on 30th June with a Grand Finale. People who have taken part in this month of protest will return to the perimeter fence of AWE Burghfield, together with as many other people as can make it, to stretch a continuous Red Line around the site. Everyone who wants the disarmament of Trident and the cessation of nuclear weapons development is welcome. Come if you can. Wear red, bring strips of red fabric or anything else coloured red that can join the line. The action starts at 07.00 but people can arrive at any time through the day and join in. You will see what to do and will be welcomed. For more information about the Red Line, visit: