Brighton's Smash EDO campaign are holding a mass demo at EDO/ITT on Wednesday 13th October. Anti arms trade campaigners plan to lay seige to EDO/ITT and shut them down for the day.

Info for the Day:: The meeting place for the demo is Wild Park Cafe (directions here) at 10am on Wednesday, but people are being asked to arrive on the evening of the 12th. Convergence space will be available. There will be a meeting about the demo at 7pm at the Cowley Club on Tuesday 12th. There will be a timeline on Indymedia and a twitter feed: @smash_edo 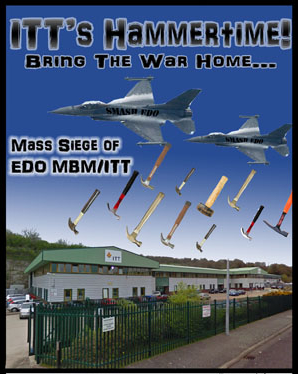 ITT's Hammertime will be the first mass demonstration since the EDO Decommissioners, who smashed up the Brighton death dealers during Israel's massacre in Gaza, were acquitted by a unanimous jury verdict (see SchNEWS 729).

Previous mobilisations at EDO have seen paint pelted at EDO from Wild Park, EDO's windows put in after a mass invasion of EDO's property, MD Paul Hills' car redecorated and thousands of activists targetting companies investing in EDO in Brighton's city centre. Smash EDO press spokesperson Andrew Beckett said “this time the message is clear – our aim on the 13th is to close down the factory for the day. The police cannot stop us from surrounding EDO/ITT”.

Sussex Police, gearing up for a charm offensive while dusting off their teloscopic koshes and ordering in extra pepper spray, have recorded a YouTube appeal calling for Smash EDO to negotiate with the police. Smash EDO have always maintained a non-negotiation stance on the grounds that “dissent is meaningless if it can only occur with state approval”.

Despite the PR veneer the police attempts to clamp down on the campaign continue. This week a five year restraining order was slapped on an Smash EDO campaigner.

Elijah Smith, one of the EDO decommisioners was convicted of witness intimidation. after making a political outburst at Brighton Magistrates' Court while he was on trial for another EDO related offence. Smith had been on remand for the previous six months and was understandably pissed off. The order will impose an exclusion zone, preventing Smith, from continuing to protest against EDO/ITT.

The judge used a new amendment to the Protection from Harassment Act (PHA) 1997, a law originally designed to protect people from stalkers, but now frequently used against protesters. This is the first time the amendment, allowing the use of restraining orders, has been used against a protester.

Restraining orders, which can now even be imposed on people who are found not guilty, may turn out to be a replacement for the increasingly out of fashion ASBOs.

Also in SchNEWS 742: Frontier Law - Eyewitness account of the No Borders camp and protests in Brussels | Red Leicester - Anti-fascists and English Defence League get ready for Leicester demonstration | It's In Their Make-Up - London shop blockaded to spread the Israeli boycott message. | Cut It Out! - Thousands protest against cuts at Tory conference in Birmingham | Fur Crying Out Loud - Brick Lane invaded by anti-fur protest | Dam Squatters - Amsterdam's squatters fight back against new eviction laws | And Finally - Three year old child is told to remove 'hoody' in Norwich.