Every bomb that is dropped and every bullet that is fired in the name of this war of terror has to be made somewhere and wherever that is it can be resisted...

Since 2001 over a million people have been killed worldwide by the US-UK War of Terror. EDO MBM/ITT supply weapons components for the US-UK war machine. Smash EDO has been campaigning for four and a half years to close down EDO.

The movement against EDO MBM/ITT is growing, in June this year over 600 people came from around the country to the ‘Carnival Against the Arms Trade’. The Carnival managed to reach the Brighton bomb factory despite police attempts to corral the march 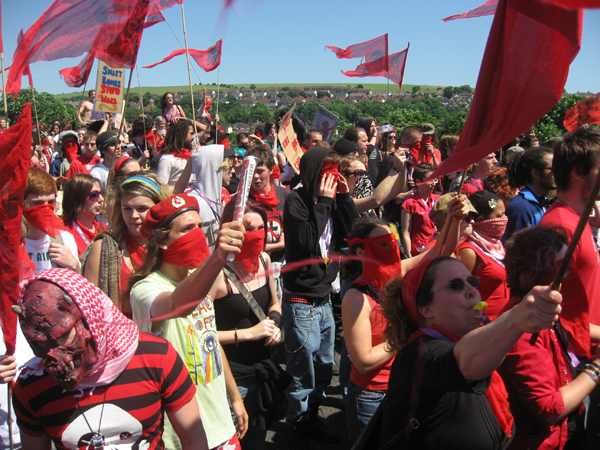 Since the successful Carnival Against the Arms Trade in June the campaign has continued against the bomb factory with weekly noise demonstrations being held outside the factory gates. Police repression has increased with five people being arrested for incidents alleged at the carnival,and five activists have been put on trial for conspiracy to cause criminal damage . Sussex police have continued their misuse of council byelaws to try to restrict the use of noise by protesters at the factory. A musical protest was held in defiance of the arrests and one man was arrested for playing an anti-war reworking of "Waltzing Matilda". Sussex police also showed up in full riot gear to a critical mass protest in commemoration of the death of Marie Vesco, who was killed en route to the 'Carnival Against the Arms Trade'.

EDO MBM's second factory in Fishersgate has closed down since the carnival but EDO MBM/ITT has finally begun full production of the Paveway IV system, a guided bomb which is integral to the US and UK's military campaigns in Iraq and Afghanistan.

On October 15th campaigners will gather at EDO/MBM ITT for a mass demo against the arms trade. The meeting point is 12 noon opposite Falmer Station next to the stone sign leading to the Sussex University campus.

The University of Sussex provide good direction to Falmer from across the country and beyond. Just click on this link:

We suggest that people catch the bus from town.