On the Verge - The Film They Tried to Ban

Police have intervened across the country to censor 'On the Verge' an independent documentary about the Smash EDO campaign to shut down the Brighton's weapons manufacturer EDO MBM. So far establishments in Southampton, Chichester, Bath and Oxford as well as Brighton have come under police pressure to cancel film showings. In Brighton police intervened to prevent a showing at the Duke of York's Cinema, just one hour prior to the scheduled premiere.

Using activist, police and CCTV footage plus interviews with those involved in the campaign, 'On The Verge' tells the story of one of the most persistent and imaginative campaigns to emerge out of the UK's anti-war movement and direct action scene. See trailers of the film here(mpg) and here (wmv). A torrent file of the film has also been created. To download a copy of the film and to know how to use bittorrent click here.

Spokesman for the production company SchMovies, Steven Bishop said "I am extremely disappointed but not entirely surprised by the police's action. There may be issues with certification but as we're not charging for entry this shouldn't be an issue. If the police really had problems over the certificate they could have approached us at a much earlier stage. Our film although focussing mainly on the rights and wrongs of protest shows a number of examples of questionable police behaviour – Perhaps this is why they left their move so late" 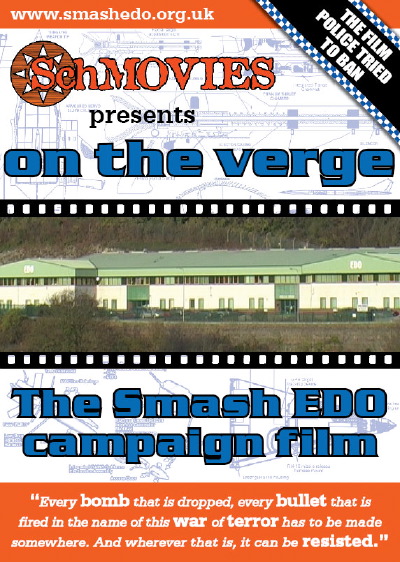 Sussex Police initially denied involvement in the decision to cancel the screening at the Duke of York's cinema, with Chief Inspector Taylor telling the Argus newspaper that "Police played no part in the controversial cancellation". Subsequently however the police were forced to admit that "a junior officer, who is not based in the city, alerted the city council to the showing and they advised the cinema of its responsibilities".

Staff at the Arthouse Community Cafe in Bedford Place, Southampton were approached at 11 a.m (Weds 19th March) by police accompanied by licensing officers. Threats were made concerning their licensing if the film, due to be shown on Thursday 20th was screened. Jani Franck director of the Community Cafe said "I grew up in South Africa and this feels awfully familiar. This has nothing to do with protecting the public this is nothing but censorship".

WE still plan to go ahead with our screening, so if you are in London come down and join us.

The screening will be followed by Q&A with the filmmakers.

Watch it in good company rather than on the goggle box!

On The Verge torrent - response from SchNEWS

Several people have made the good suggestion of doing a torrent of On The Verge.

We will do it later this week - probably from Friday (28th March). The reason is that the process of getting the film legally 'risk assessed' - particularly for those whos talking heads could cause legal problems for them and others - is just being finalised. The solicitor has urged us to not release the film as it is currently on the web - even as a torrent. It's also on hold for several days this week because the relevant crew are on the road as part of the Smash EDO tour/On The Verge screenings.

Also, the film will be finalised by the end of the week because it will then go off to a DVD copying firm, and the film will be released on DVD as soon as we have copies. This will be about a third of the way through the Smash EDO tour. The latest version of the film will be screened at these gigs anyway.

So - the end of this week the torrent details will be posted.

The Smash EDO film ‘On the Verge’ will be screened for free on Wednesday the 2 April at The Friends’ Meeting House, Ship Street, Brighton. The film will start at 19.30 and will be followed by speakers and a Q&A.