From 27 to 30 August, Smash EDO held an action camp in the Wild Park, close to Mouslecoomb Station in Brighton. The camp aimed to be a time to hold creative direct actions against the arms trade and a forum to discuss the anti-arms trade movement, but on Tuesday afternoon police forcibly moved in and removed the camp's infrastructure using a nineteenth century by-law. Despite police repression most campers remained put, new provisions were brought in, and activists maintained the camp whilst carrying out a series of daily actions:

Details of the camp | Directions to the camp
Schnews Report: Tents Stand Off 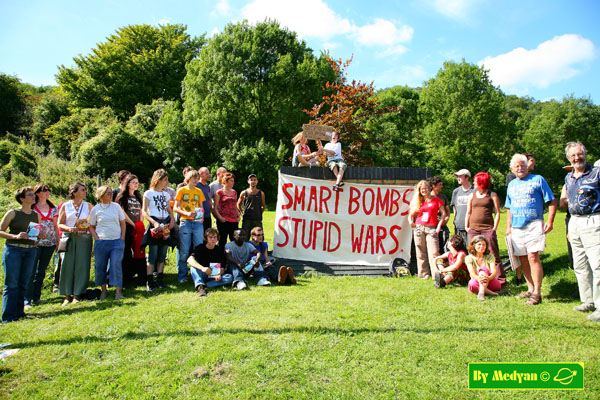 For over 3 years, Brighton residents have been campaigning to close down local arms manufacturers EDO MBM, a wholly owned subsidiary of EDO Corp, a US-based arms multinational. EDO MBM's military products include bomb racks, release clips and arming mechanisms for warplanes like the F-16 and Apache helicopters. They have contracts with the UK Ministry of 'Defence' and US arms giant Raytheon relating to the release mechanisms of the Paveway bomb system, the most used missile in the aerial bombardment of Iraq.

The campaign has included rooftop occupations, blockades, creative protests and every Wednesday from 4-6 a noise demo takes place outside the EDO MBM factory.

This is the third peace camp fo the campaign. The first camp in 2004 mobilised local support and ended with a rooftop occupation of the factory. Sussex police, accompanied by a helicopter and dogs, raided the camp in 2005 and tried to shut it down. However the local council told the police they had no intention to close the camp which was on council land [reports].

In 2005, EDO MBM attempted to quash the campaign with an injunction under the Protaction from Harrassment Act (PHA) with the help of notorious anti-protest lawyer Timothy Lawson-Cruttenden. The Injunction collapsed a year later, costing EDO around £1m in costs and with compensation awarded to the protesters representing themselves.

During the campaign over 40 protesters have been arrested with the vast majority resulting in acquittals or not even going to trial. Two protesters spent a week on remand before having cases against them dropped. Since the campaign began EDO MBM boss David Jones and eight other directors have resigned and EDO MBM have been forced to close a major section of their business.

The land for the Smash EDO action camp was taken late Sunday evening. A cargo net was erected between tree branches and protesters occupied the trees to make the site harder to evict.

The camp has been being set up throughout Monday. Marquees are now up and actions are being planned.

Around forty activists took part in a vigil to mark the start of the camp at the bottom of Home Farm Road where the factory is situated.


40 police officers have threatened to use by-laws repealed in 1928 to 'forcibly evict the camp.' Inspector Parr is in charge of the operation. Brighton Council parks department are completely unaware of the eviction. Police say they will only take half an hour to completely dismantle the camp.

Get down there, stop the eviction now.