Brighton-based arms manufacturer EDO are producing electrical weapons components for the US, UK and Israeli militaries. For over a year, the Smash EDO campaign has been trying to shut them down by direct protest at their premises. Recently, EDO MBM have applied for a High Court injunction to stop all protest at their premises except at designated times. The Smash EDO campaign regards this as a direct attack on freedom of expression and calls for a week-long protest camp, starting with a peace march in Brighton [report]. 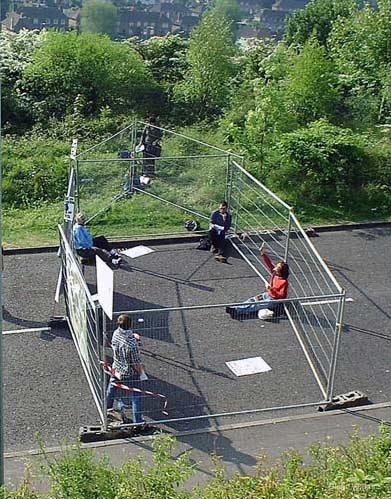 As Smash EDO prepare for a mass demo) on 13th August to kick start the 2005 Smash EDO Peace Camp, EDO MBM have had two activists remanded in Lewes prison in a desperate attempt to stop the protests. Campaigners are planning a week long protest camp from the 13th-19th August.

Since the beginning of 2004 a broad cross section of activists in Brighton has been campaigning to shut down the weapon manufacturers, EDO MBM. The company manufacture electrical components for missiles, fighter planes and tanks at their premises on the Home Farm industrial estate, Moulsecoomb. In 2003 they gained a contract for the supply of release mechanisms for the Paveway series of guided bombs, the most widely used and lethal weapon during the invasion of Iraq. EDO also supply equipment to companies known to sell weapons to the Israeli state.

The movement against EDO MBM includes anti-capitalists, academics, students, peace/anti-war activists, human rights groups, Palestine solidarity activists and faith groups. Many were involved in the mass movement against the war in Brighton and some have been to conflict zones and seen the effects of the equipment EDO MBM manufacture. In Brighton, on the day war started, 5000 people took to the streets in protest. The campaign against EDO MBM aimed to galvanise those people into taking positive action to kick the arms dealers, those who had propped up the war, out of their community.

On 20th May 2004, in the context of the siege of Fallujah and massacres in Gaza, a group of activists blockaded the access road leading to the factory while another group occupied the roof [report]. The actions shut down the factory for the day and, according to EDO MBM’s Managing Director Dave Jones, cost £20 000. Soon afterwards noise demos began outside the factory where activists welcomed workers leaving work with drums, whistles and loudspeakers informing them of their complicity in mass murder. The demonstrations have gone on week after week with the slogan ‘we will be here until EDO aren’t’.

In August 2004 activists held a week long peace camp in Wild Park behind the factory [report]. EDO MBM were forced to hire extra security as demonstrations occurred every day and only half the workforce turned up. The peace camp concluded with a rooftop demonstration lasting over twenty-four hours.

Throughout the winter the noise demonstrations continued unabated while activists sought to inform the community in Brighton of what EDO’s business was really about. Indymedia postings were made by many anonymous groups directly protesting against the warmongers by smashing windows and throwing paintbombs at the factory [reports 1, 2]. Concrete and manure were dumped at the entrance to the factory [report]. Activists also disrupted conferences organised by EDO.

In December and January activists accused of blockading the factory and occupying the roof defended themselves in court by alleging that EDO MBM’s business was unlawful as they were complicit in war crimes, crimes against humanity and genocide. They argued that EDO’s directors bore criminal responsibility for the crimes committed with their equipment in Iraq and Palestine as they could reasonably be expected to be aware of the illegal use this equipment was put to. In February activists who had occupied EDO MBM’s roof were acquitted.

EDO MBM first sought to quell dissent against them by mounting a libel action against Indymedia UK. Indymedia refused to be cowed and soon EDO was deserted by their own solicitors. Around this time a group calling themselves the 'Masked Pixie Avengers of the Victims of EDO Corporation' cut through EDO’s perimeter fence and damaged the air conditioning system [report].

On the second anniversary of the invasion of Iraq, after at least 100 000 Iraqis had lost their lives, activists held a Citizen’s Weapon’s Inspection at the factory. Police declared a Section 14 order limiting their presence to an hour and arrested several of the Blix Bloc [report].

By this time EDO MBM realised that the campaign was there to stay. The factory sought a civil injunction under the Protection from Harassment act 1997, designed to protect vulnerable people from stalkers, which would restrict protest to ten people, two hours a week, in silence and would create an exclusion zone around the factory. Breach of the injunction would be punishable by five years in prison and anyone who could be defined as a protester would be bound by it [report].

When people heard the news about this new attack on civil liberties, the campaign became of national importance for anyone who valued the right to protest. Two demonstrations of over seventy people were held outside the factory and groups around the country began taking an interest.

At the interim hearing in the Royal Courts of Justice Judge Gross asserted ‘freedom of expression was jealously guarded in English law’ and refused to grant the majority of EDO MBM’s proposed injunction. EDO had shelled out in excess of £50 000 on mounting the case and had succeeded in increasing the size of the campaign against them. However, Judge Gross did ban protesters from photographing EDO employees and sub contractors and from protesting in the road outside the factory. Protests are allowed on the grass verge opposite [report].

In May 2005, a demonstration of nearly eighty protesters assembled outside the factory on the first day after the interim injunction came into effect. A few weeks later, hundreds of protesters marched to Brighton police station to demand that the police investigate EDO MBM’s complicity in war crimes [report].

In mid-June a legal observer at a demonstration outside the factory was remanded in Lewes prison for 4 days for allegedly filming a security guard at the factory. He is charged with breach of the interim injunction which carries a maximum term of five years imprisonment. He has elected for a jury trial at Lewes Crown Court which would be the first time anyone has been tried for breaching an injunction under PHA. He was released on bail after five days in custody [report].

Two weeks ago another activist was remanded in Lewes prison, this time alleged to have assaulted a security guard who was illegally detaining him with handcuffs [report]. According to the Smash Edo campaign, this is "clearly a desperate attempt to scare activists out of protesting at the factory by arresting and remanding vulnerable activists" (both activists arrested were already on bail and so could be easily remanded). The Smash Edo campaign states: "The challenge EDO have set us is to carry on protesting in greater numbers and show solidarity with each other so they cannot victimise us further".

Campaigners believe that the example of Smash Edo in Brighton shows how successful dedicated and sustained campaigning can be and that it also shows that when campaigning is successful repression against it is strong. Those campaigning against EDO MBM in Brighton will need national support if they are to succeed and their fight against the injunction will affect the future right to protest and the battle for civil liberties in the UK.

The Smash EDO Peace camp will be held in the Wild Park from 13th-19th August 2005, the campaigners expect it to be "a celebration of life and resistance in the face of repression and genocide". More details can be found on the SmashEDO website.