Bristol Indymedia has been hosted on a Bytemark Debian virtual server since the last server seizure in 2005 [ 1 | 2 ], during the run up to the G8. From then up until November 2013 the site was running Oscailt, in March 2014 it was re-launched as a WordPress site "using the software modremoveip". On 14th August 2014 Bristol Indymedia switched off open publishing on the site for a summer break with the intention in September to "review whether we have the time and inclination to turn publishing back on".

Since then the only source of further information has been from an article in The Times which reported that the PACE special procedure production order obtained by Avon and Somerset Police and served on Bytemark on 15th August 2014 "demands access to the details of administrators and bill-payers, login credentials, information on those who posted articles and the IP addresses of everyone who visited the site over an unspecified period". The court order served on Bytemark hasn't been published. The Times has reported that the Police have said that, "No arrests have been made in connection with this incident". 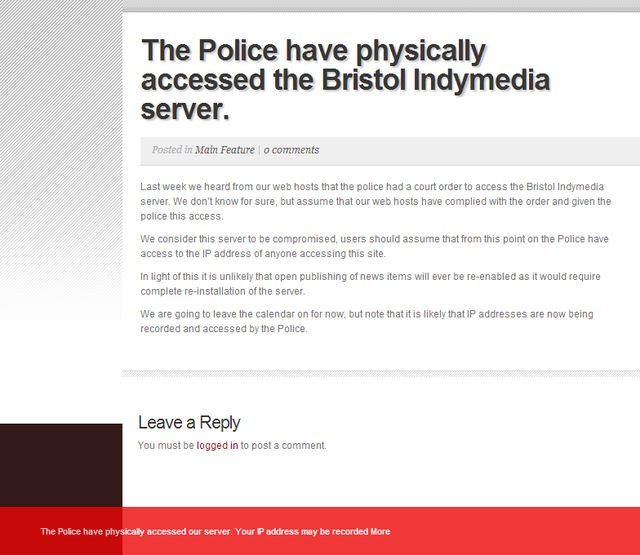 The Police have accessed the Bristol Indymedia server

Unfortunately a, now hidden, fabricated, article containing intentional lies, claiming that "owing to an administration error by one of the techies all IP address details for the past 16 months were still stored on the server", was published on UK Indymedia and picked up by various sources, including The Times, before it was removed. This is a classic example of disinformation, "intentionally false or inaccurate information that is spread deliberately" and it used the classic tactic "to mix some truth and observation with false conclusions and lies". The propagation of this disinformation, as misinformation, "information that is unintentionally false", has occurred on activist discussion boards, Twitter and no doubt elsewhere. The nature of open publishing (pioneered by Indymedia — anyone can post an article) is vulnerable to abuse — in the past the Police have posted disinformation including comments inviting activists undertake illegal activity.

It is worth noting that the Police were not just after IP addresses of authors of specific articles but, as The Times reported, "details of administrators and bill-payers, login credentials, information on those who posted articles and the IP addresses of everyone who visited the site". It appears that it might be a general Police fishing operation as they were seeking far more data than they would need if they were genuinely after the details of the poster(s) of specific articles.

There is no reason to disbelieve Bristol Indymedia's relaunch article and publishing page that stated that they installed Apache mod_remove IP, this means that WordPress would never have access to the client's IP address and there would be no IP information in the Apache log files. However the site didn't use encrypted connections for reading or publishing (HTTPS), probably didn't have an encrypted filesystem.

Thanks to Edward Snowden's revelations it is now general knowledge that GCHQ tap and log vast quantities of Internet backbone traffic, so they will, no doubt, have extensive records of activity on the Bristol Indymedia site and this data, in all likelihood, have been shared with the Police. However GCHQ's illegally gathered data would not be admissible as evidence in a court case and GCHQ wouldn't want their evidence used in court as this would force them to admit what they are doing. In the United States there is a long history of the Police basing cases on illegally gathered intelligence data and then "building a parallel - or separate - evidentiary basis for a criminal investigation in order to conceal how the investigation began", this is known as parallel construction.