Prague: An overview (foto and text) 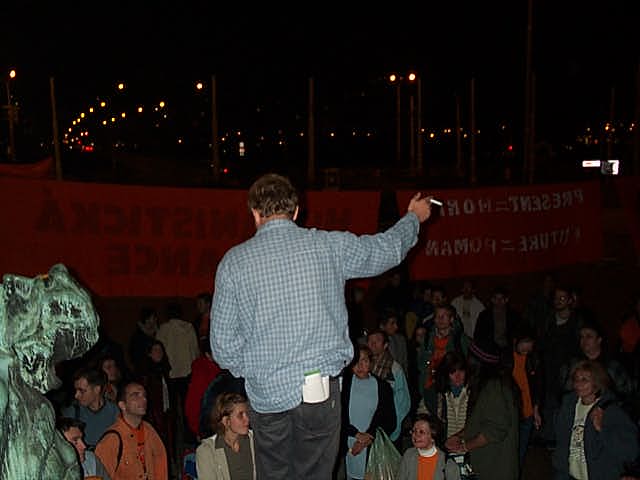 Prague: An overview (foto and text)

There is no escape from mobile phones in Prague - even the underground has network coverage. With delegates, protesters, mainstream press and connected Prague locals preparing for the World Bank Group’s 55th annual meeting the ringing never seems to stop. The whole city it would seem is phoning each other.

Across the whole city there is a tangible sense of anticipation around the forthcoming protests scheduled over the next few days - police guard every major hotel in the city and any key commercial facility; posters advertising a counter summit and various protests can be seen pasted on street corners; crowds of people are eyed with suspicion; suited diplomats in slinky black limousines hurtle through cobbled streets. It is a city waiting for something to happen. It is a city on edge.

Lee Davidson, a black American who has lived and worked in Prague as a jazz singer and English language teacher since 1991, has witnessed a lot of change in the city over the past decade. "People are becoming less afraid of new things". He remained pessimistic however, about the way in which the Czech media had portrayed the forthcoming protests and the issues connected with it: "The (Czech people) really are afraid. There’s been a big build-up in the media and they have seen things on TV: how things went in Seattle and Melbourne, police dragging people off to who knows where. The police have closed schools, blocked certain roads … all of this reinforces the fear of protest".

Marcella and Monica, two students waiting for a train at the station in Namesti Miru - the square scheduled to host an anti-fascist demonstration at 1.30pm this afternoon (Saturday 23) - echoed Lee’s sentiments. "Protest is OK but window broken, all Prague capput … not good". It is an attitude shared by many Prague residents I spoke with - already people are talking about violence and broken windows, the deeper issues seem to have been forgotten or ignored.

Nevertheless, politics is in the air. A heavy police presence has stopped a lot of activities from taking place - The Art of Resistance cultural event was forcibly cancelled after it had its license revoked and several marches are being legally challenged by the Prague authorities. Nevertheless events are taking place.

This evening several hundred mainly Czech people gathered in a small square near Jeraskuv bridge in the south of the city and listened to African and Czech music alongside speeches by professors talking about issues connected with world debt. 29 year-old Dana Horovitz, President of the Czech Humanist Party (a pan-European political party opposed to the World Bank) and the event organiser explained the reasons behind the action. "This is a festival of humanism against the IMF and World Bank … we are opposed to them because they create poverty - they are the organised expression of capital."

Horovitz explained that conveying that message was the purpose of the four-hour cultural festival. "I think it’s important that people take some information and have some different point of view - few people in Prague know about the World Bank. This was a festival to give some different information - this was our main aim".

At the heavily-protected official Conference Centre - which sits across an elevated section of motorway - thousands of people have been converging as the official process of negotiations and talks gets underway. In the coffee lounge - near the majestic window where delegates can appreciate the pleasant view of Prague - a representative from Guinea explained in very concrete terms the issues connected to the World Bank, debt repayment and global trade. "In 1999 the price of coffee fell 50% and cocoa 40% … these products provide our government with 90% of the national budget. Globalisation is not bringing anything to Africa - it is only good for industrial nations." Asked whether he felt if protests could achieve anything he remained sceptical but expressed hope. "At least the World Bank/IMF will have to reflect on business with Africa - conditions for debt repayment and the real price of debt".

A ringing mobile phone interrupted his chain of thought. "A mobile phone/the Internet - these are good things from globalisation but if you open Africa’s borders it will kill our industry - that is what globalisation will do".

Given the popularity of the mobile phone in Prague it is not surprising that it has entered the city’s collective mind. As Jazz musican Lee Davison explained. "Mobile phones are part of globalisation - they need co-operation between companies but in order to take advantage of this technology someone somewhere is getting exploited".

The issues, it would seem, are ringing bells in this corner of Eastern Europe.