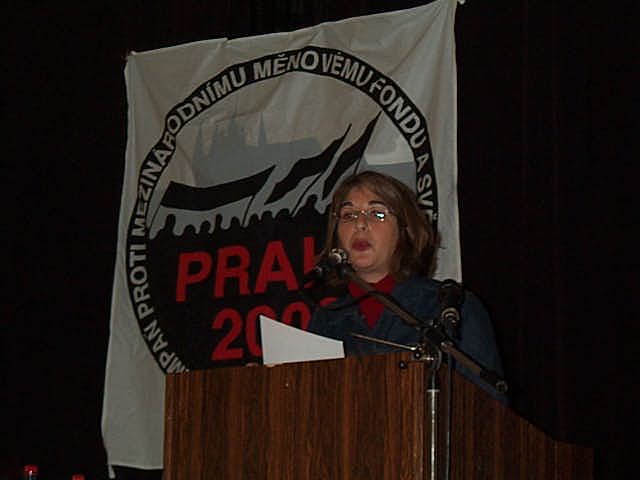 Naomi Klein, Canadian author of the best-selling book 'No Logo' talked to a crowd of about 100 people today at the Domovina Cultural Centre in north west Prague.

Addressing issues connected to corporate brand-based business (the subject of her book) she explained why she believed successful anti-brand campaigns against companies like McDonalds, Shell and Nike form a critical part of the current anti-World Bank Group Prague protests. She went on to convey her feelings that the popularity of brands was contributing to the movements against them.

"Multinationals have - in a strange way - created our coalitions for us" she said. Their popularity and widespread availability has turned them into visible and apparent examples of the increasing controls of everyday people's lives by brand manufacturers.

Responding to whether she felt people were making the connectins between brand-based political campaigns and the wider issues of the World Bank and other transnational organisations she refered to a woman from Nike's home state in the USA, Oregon. "Nike acts as a gateway drug to those wider issues".

Concluding, in part, on the role of the movement in changing the minds of a wider section of the community she explained that she felt "this leaderless/headless decentralised model has to find a way forward otherwide it just becomes a headless beast - if this is a movement without leaders and just followers then everyone has to lead"

Klein was also positive about the role of alternative media in conveying a different perspective from the mainstream. "(This movement) covers itself with a network of independent media", she said pointing out the benefits this has for a multi-talented base of supporters.

Klein was also questioned on whether she felt that she was running the risk of becoming a brand herself. "I wrote a book" she said "I don't sell t-shirts and lattes".