Worse than a putrid society is the risk that all of us get used to its stench. 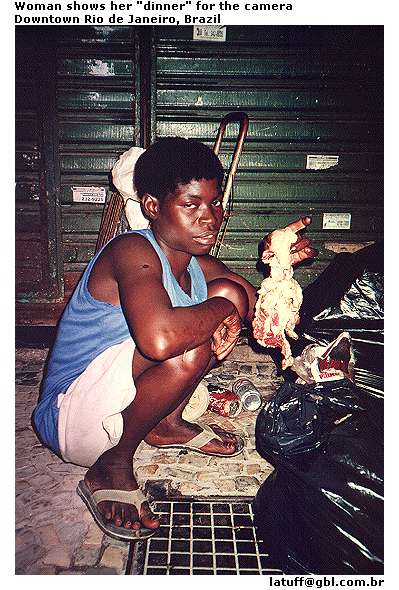 As night falls on downtown Rio de Janeiro, two women exchange food remains in trash bags left on the sidewalk by a restaurant. I have seen this thing many, many times in my lifetime. I have always passed by these people, as everybody does, everyday.


But today it was different. I stopped and stayed for a moment and then
decided to turn back and talk to them. I introduced myself and said I would like to take some pictures. Distrusting me at first, they ended by agreeing.


The repugnance of that scene distracted me completely. I could only to think to try to catch all of this through images. I remember few parts of our conversation. They said they lived far from here and that each week this ritual was carried out: to separate what should be eaten by pigs and dogs, and what would be suitable as a food for them and their families.


Such enormous nonsense made me think to ask them if they were really saying the truth. Whatta stupid I am, I thought. I recalled some Brazilian related movies as "Ilha das Flores" and "Cronicamente Inviavel". People whom eat garbage is a fact!


I finished with my photos, and they finished with their task of collecting the bags of that repulsive mixture. I was not able to remember their names, but that moment will stay with me for my life. I could not even say goodbye with a kiss on the cheek or a shake of the hands. It pained me. I left them feeling nauseous, having in mind only to puke and develop the film.


From that story an important detail come to my mind. The disgusting odour of rotten food and the fact that the women seemed not to feel sick about what they were doing. They were used to eating garbage. And the hurried people whom always passes by are used to seeing other people eating garbage. Well, better to eat trash than nothing, right?


I think about those pedestrians that did pass by. It seemed that they only realize tragedy when see it confronts them from the comfortable seat of a cinema. And such conscientiouness will disappear as soon as their feet touch the sidewalk. They are touched by the drama shown on the screen, but refuse to face it in the original version on the streets.


Worse than a putrid society is the risk that all of us get used to its
stench.